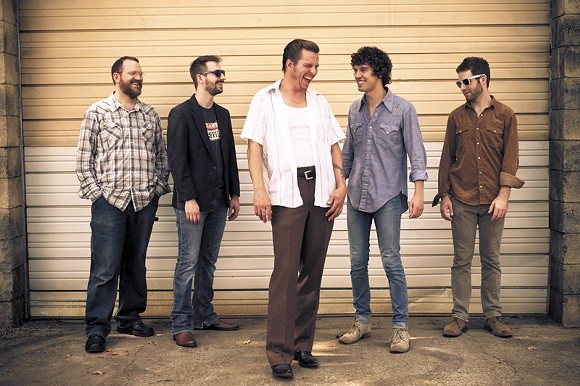 A farmer by day, Bradford Lee Folk leaves the field at night to play his own unique take on bluegrass/country. Folk got his start in seminal bluegrass band Open Road—he’s even run a honky-tonk in rural Colorado—the now-Nashvillian is real-deal country.

His is a gentle approach to twang, soothing and brimming with skill, thanks to talented Playboys Kyle Tuttle, banjo, and Nathan Swartz, mandolin. 2014’s Somewhere Far Away highlights the James Taylor-like ease to Folks’ voice; it’s just what you want to hear in the middle of the summer. Banjos twinkle at a low boil on “Trains Don’t Lie,” as spare strings coax out the winsome mood.

Indiana’s Nick Dittmeier & the Sawdusters play a big kind of rollicking, electric alt-country that sits perfectly alongside our local boys The Train Wrecks. Laced with harmonies and strong guitar leads, the hard-touring band was nominated as Americana Group of the Year at this year’s Louisville Music Awards, and have shared the stage with the likes of Justin Townes Earle and Hayes Carll.

Can’t make it out that late for Bradford Lee Folk and the Bluegrass Playboys? They’ve got an 8 p.m. gig on Thursday, July 16, at The Sentient Bean, too.