Prior to the Playboys, Folk played in Open Road, a bluegrass band that opened for acts like Allison Krauss and Willie Nelson

"Oh my God, I almost just flipped my tractor!" he exclaims midway through our phone call. His tone is more surprise than fear, like flipping tractors is just a thing that happens sometimes.

"I guess I was just trying to do too many things at once," he muses.

It's a familiar refrain from Folk—those exact lyrics appear in the song "The Wood Swan," warning listeners that things "have a way of coming undone."

Truer words have never been sung.

Folk will play at Trinity United Methodist Church this Thursday with his band the Bluegrass Playboys and opening act Uncommon Collective—provided he doesn't have any more close calls out on the farm.

A Missouri native, Folk's music career was steeped in the classics with a heavy emphasis on guitar, which he learned to play with his dad.

"I grew up listening to old music, whether it was blues or jazz or country music, but always guitar players," he recalls.

Prior to his gig with the Playboys, Folk played in Open Road, a popular bluegrass band that opened for acts like Allison Krauss and Willie Nelson. The band played showcases for the International Bluegrass Music Association and got signed to Rounder Records.

"The band was together for seven years, and we had a lot of success and great opportunities to play big stages," he says, "but I was young back then. In my twenties I was pretty wild. I didn't wear well on the road and I got burnt out." 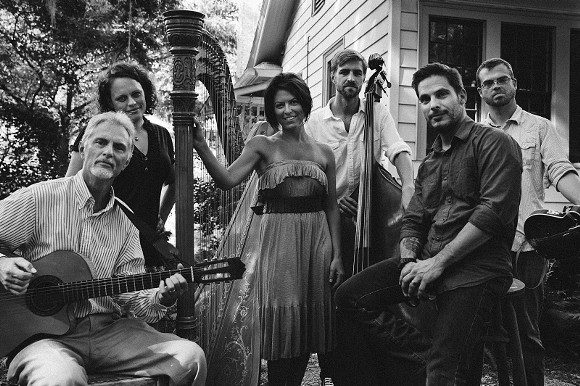 That's when Folk started Swing Station, a honky-tonk bar in Laporte, Colorado that booked top-of-the-line bluegrass bands. There, he fell in love with Lindsey, a Swing Station bartender who'd go on to be his wife.

Lindsey was on her way to graduate school in Iowa, so they sold the bar and moved. After she graduated, they were itching to move again.

"We wanted to move to the Southeast because we had a really romantic idea of what that meant," Folk says.

They settled on Nashville, where they've been for five years.

"When I got here, I had a lot of preconceived notions about a lot of things," Folk says. "The last five years, I've done a lot of opening my eyes and ears and considering things I didn't find worthy of consideration."

As evidenced by the tractor incident, Folk is also an avid farmer and pulls a tough double duty between touring and tilling.

Back in Colorado, he worked on a cattle ranch, which opened his eyes to the inhumanity ranch animals sometimes endure.

"I much prefer this type of farming [I do now] to cattle because it's much cleaner, no blood and guts," he says. "I think the next thing is going to be animal rights, like a new movement for ethical treatment. We can all have meat, but there's no reason these animals need to be treated this way and to this extent; it's criminal."

Folk pauses to add, with a laugh, "I don't usually sing about that kind of stuff."

While a theme album about conscious animal treatment is likely not in the works, Folk does draw inspiration from real-life events for his music.

"I sing about things that are real to my life and the people around me," Folk says. "I don't make things up about people, like 'maybe this person lived in Appalachia and did this'—I sing about things that are happening around me. To me, that's what I find interesting in art and life. Give me truth about what you're seeing and feeling. Don't make up a story for me. A famous example is the coal mining industry—they write records about coal mining but I'm like, wait, you don't know anything about coal mining!"

That's not so much a dig at Loretta Lynn as it is an observation about where roots music has come since the days of the Stanley Brothers.

"When we played with Open Road, our heroes were still alive," notes Folk. "A lot of those people have died off and with these new artists, there's no roots to the music. They have catchy tunes and that's fun, but it's not like this person has done this, has these things to tell. I don't feel like the authenticity is there. Not to say you have to be from the Blue Ridge mountains, but the music should be true to you."

Savannah holds that authenticity that Folk craves—he came around in July with his band and loved it so much he returned just two months later.

"We're hanging out where you can drink outside on this big patio, and I was just standing there thinking, 'There's something different about this place, I can't figure out what it is,'" he remembers.

"Then it dawned on me—not one person here in this entire plaza is on their cell phone! You know how people are these days. I feel like Savannah is kind of the end of the road—the connection is stronger because people are less distracted, maybe more in the moment. I really love that about it."

Folk has nothing but praise for his bandmates, who he calls "red-hot."