Broughton Common: Anything but commonplace

Owners of The Ordinary Pub expand with new concept and location

OUT OF the ordinary yet relatable food is what regulars of The Ordinary Pub have grown to expect. For everyone else, the draw for The Ordinary is a constant weekday brunch and bottomless mimosas. Personally, I’ve always been partial to The Ordinary Pub’s happy hour deals.

In a city with so few brunch options, our town just grew by a waffle plate. Broughton Common, the sister restaurant to The Ordinary Pub, started slinging eggs this year and has expanded Savannah’s late Saturday or Sunday funday food possibilities.

Opening the doors to the expansive space on Broughton Street was an effort of the entire team. It was not in the plans for co-owner Michael Vaudrin and his team; it all happened by chance. 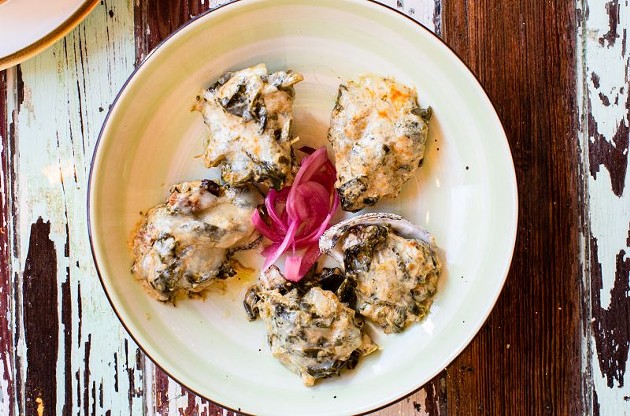 Vaudrin explains how opening the new restaurant went down.

“I realized I needed a prep-kitchen because that little pub [The Ordinary] was screaming. I was looking for a thousand square foot building to rent so we could get some prep done there and maybe some catering out of it.”

Old school Savannahians recognize the new space as one that once held Punch and Judy’s. The mezzanine, previously known as the juniors’ section, was an easy sell for Vaudrin.

Broughton Common had to lift the ceiling in order to use the mezzanine for restaurant seating.

“It was not planned in any way, but I fell in love with the mezzanine. And then to have the extra kitchen space and letting Chef Grizz spread his wings was super appealing,” Vaudrin proudly says as we stand on the revamped second level, referring to Chef Justin “Grizz” Grizzard.

During the nine months of construction, the floors were ripped up and repurposed into a bar the length of a bowling lane. The rustic tables were hand built from repurposed wood, and the original art adorning the walls features Broughton Common’s signature cocktails—drinks like the Ding Dang Daiquiri, named after Chef Dan with The Ordinary Pub.

I was very curious as to how the team approached making the new menu. Vaudrin says it’s because of his love of the food. 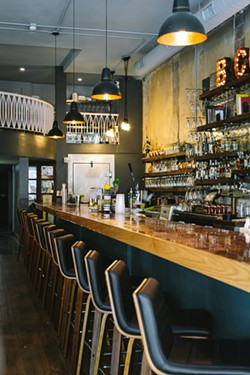 “We reimagined the food down there [at The Ordinary], and that was my biggest concern. I said Chef, can we reimagine the reimagined? Can we make it different enough to be worth doing but similar enough to be comfortable? This menu here is basically the stuff we did not have room to do.”

The menu expansion was easy with a bigger space and bigger kitchen. Little upgrades such as the ability to add smoke to the menu have been included. The Smoked Oysters Rockefeller imparts smoke perfectly through the half-shelled oysters which are topped with a gooey sharp white cheddar, dreamy creamy collard  greens, and a pop of salt from boar belly bits.

A mound of pickled red onion is served amid the molluscs filled plate, which is the ideal addition to cut through the hearty starter. You won’t look the most attractive tossing back the heavy plate of seafood, but it’s well worth it.

A second worthy starter is the She Crab Soup, a favorite type of soup for most locals. Always creamy and peppered with crab, Broughton Common is no different (but maybe a little better). The portion, addition of sherry, and floater of fresh chunked crab sets Broughton Common apart from other variations of the well-known soup.

The menu is consistent with the restaurateurs’ mantra—offer food that is anything but ordinary. Instead of chicken and waffles, expect a Duck & Waffle brunch plate. Instead of boring mac and cheese, patrons are offered a Brunch Mac Bowl layered with smoked pork, creamed collard greens, and fried egg.

Deviled eggs paired with chorizo, mimosa-poached shrimp, and a curry hollandaise, and Pork Belly Corn Dogs (no explanation needed there) are a few more of the extraordinary items that grace the new menu.

Creating the menu for both spots is a collaborative effort. “Chef Grizzard’s mind is all of the technical stuff, but it is a collective group effort between him, our Executive Chef at the Ordinary Pub, Chef Sean Freeman, and our Chef GM down there, Chef Dan,” says Vaudrin. “All three of them have been with me for three years and we all sit down and start spitballing weird ideas.”

With such a creative kitchen staff, the menu will be changed quarterly to reflect seasonal ingredients and what is available from Broughton Common’s local purveyors like Kachina Farms, Bootleg Farms, and Savannah River Farms.

The drink menu reads just like the food side—well-made craft cocktails each with the restaurants signature twist. The Bhuna Blood Mary sticks out with its original infused curry vodka and chickpeas.

Can you name another restaurant in Savannah that offers more than one coffee cocktail? There is an entire section dedicated to Cold Brew Cocktails to really round out your brunch experience. That is if you get tired of the constant flow of bottomless mimosas.

When the Ordinary and Broughton team located the giant space, they discovered an additional couple thousand feet on the third level of the building. The Blind Sus is a third casual gastro pub concept that again happened by chance for the restaurant.

It sits only a few steps above Broughton Common and through its very own front door. Once you hit the third floor of the restaurant you will find a wide open space ideal for eclectic events and the best window view on Broughton Street.

“We are trying to go a little more approachable price and approachable venue, and a little bit more of what Savannah is with the old floors and old walls,” explains Vaudrin as he graciously gives me a tour of the eclectic space.

As for the menu of the Blind Sus, it is geared towards elevated bar food with items like pressed burritos and wings. You can try the third location any day from 6 p.m.-midnight.