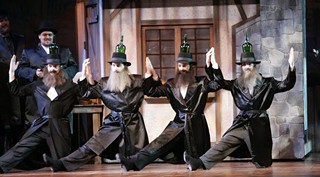 'Fiddler on the Roof'

They say that while an actor may leave the stage, the stage never really leaves the actor.

Bruce Goldman, who has the lead role of Tevye the Milkman in this week’s visiting production of Fiddler on the Roof, can tell you all about it. As a youngster, he sang and danced on Broadway, and toured the country in some of the most popular musicals of the day.

Then he took 25 years or so off to play businessman.

But the siren song of the theater kept calling his name, and two years ago he added another company to his empire: American International Music (AIM) Management, which produces and promotes plays, musicals and television programs.

AIM’s first order of business was to mount this tour of Fiddler, auditioning professional actors and singers in New York City to work with Goldman in the fictional town of Anatevka, in Tsarist Russia in 1905.

In the Tony–winning musical by Jerry Bock, Sheldon Harnick and Joseph Stein, Tevye is the father of five strong–willed daughters. He hasn’t much money, but he has deep faith, and a sense of humor, and an abiding belief in the deep–rooted traditions of his community.

Fiddler on the Roof includes, among many others, the songs “Sunrise, Sunset,” “Tradition,” “Matchmaker,” “Do You Love Me?,” “To Life!” and, of course, Tevye’s signature song–and–dance “If I Were a Rich Man.”

You’re also a very successful businessman. Why not do that or performing full–time? How can you do both?

Bruce Goldman: Well, I’ve been in retail for a long time. I’m actually an unemployed actor that’s a businessman. I’m very heavily involved in real estate development and design, mostly in Southern Florida, and I have a marketing and advertising agency in the Philadelphia suburbs. And I own the biggest costume store in the world, in New York City, on 11th and Broadway, right next to Grace Church. It’s a block long and it takes about an hour to go through it. It’s called New York Costume Company Halloween Adventure. I have seasonal costume stores, and toy stores.

All the things I have going on pale in emotion to what I get from being able to tell the story that I’m telling with the show. Fiddler on the Roof is probably the most magical musical that’s been written in the history of musical theater. And Tevye is the most magnificent part a man can play. It touches everybody in one way or another, in all cultures.

You started on the stage as a child?

Bruce Goldman: When I was 7, 8 years old I got into the Philadelphia Boys Choir, which traveled extensively. I was one of those little kids that had some talent, and Mom and Dad spent a lot of their effort and energy trying to drag me around and get me into auditions. The William Morris Agency picked me up, and I was getting a lot of wonderful auditions, and parts with Equity theaters.

I did The Impossible Years with Alan King, and the tour of The King and I with Yul Brynner. I did The Sound of Music, I did Oliver!... this was between 7 and 14. It really is wonderful for children to get that confidence you can get from being onstage, learning about public speaking. That can really reach out and set them up for their entire life if they get that.

And that helped me when I ultimately decided I didn’t want to do it. At that age, you don’t know what you want to do. So I drifted away from it, but I’d always continued to sing.

Bruce Goldman: I got married young, and when my daughter was getting into some dinner theater – she has a wonderful voice – I got the bug back. And I never had lost what I’d had as a kid – it just was right there.
So I started doing theater again, in my late 30s. And as I got a taste of doing some of the shows I loved – I did Harold Hill in The Music Man, Daddy Warbucks in Annie, Fagin in Oliver!, Henry Higgins in My Fair Lady, and of course, Tevye – it was wonderful to go back. I started doing community theater, then I got into regional theater, then I got my Equity card.

And I decided, I need a segment of my life dedicated towards the entertainment industry.

Fiddler on the Roof is 45 years old, and was recently revived on Broadway. Why does it still resonate with people?

Bruce Goldman: Because it touches everybody and every part of their life, throughout their day, throughout their whole lifespan. Tradition is all set in a pattern of how we live. We all have some type of traditional methodology toward how we act each day. With our families, with our friends.

And the show is the story of a man trying to hold on to his traditional values, to what holds life together in this little town. Trying to deal with the changes that are going on around him.

It exists every bit today as in the early part of the century. The story goes back 100 years – it was written by Sholem Aleichem, who wrote a lot of wonderful Yiddish folk stories, including Tevye and His Daughters. It’s an example of all the immigration that has taken place, and the persecution of people throughout the world, not just the Jewish people.

Bruce Goldman: I know what my plans of doing are! We’re going to be putting a school together, myself and two other people, for underprivileged children, for the fine arts. I think we’re going to try to do it between the two cities where I live, Philadelphia and Ft. Lauderdale. For all the children who don’t get the chance for the dancing and the singing lessons. The parents don’t have the money to run them here and run them there, and we never get the chance to see their talents.

Look, if you get to a point, ever in your life ... it’s not all about how much you make ... it’s nice if you can do something. It’s actually much more fulfilling when you’re doing something for somebody. It’s just like giving a gift. People think ‘Oh that’s so wonderful,’ when you’re doing it, but you get a lot of self–gratification as well.

‘Fiddler on the Roof’