Scrumptious plates of goodies from the Sunday Brunch Buffet.

LET’S FACE IT: Richmond Hill can seem like a wasteland to those seeking something other than franchise eats, and even lacks a local bakery. Mark Thomas might have it all figured out, though.

You wouldn’t usually associate a place called “Bubba’s” to be joined with a trendy title like Bistro—as my daughter obligingly pointed out—but when you’re sitting in the sunlit front dining area, overlooked by a huge maritime map of Ossabaw Island, dining on some of the best pimento cheese outside of my grandma’s kitchen, well, it sorta makes sense.

Thomas, the friendly and easygoing chef and owner of this small eatery in Richmond Hill, says he wanted to expand his catering business to include a restaurant with a homey, unpretentious sort of name, as a way of sharing his fine dining skills to the general public.

Mark grew up with the idea that cooking was a way to bring people together, with a mother who had her own unique way in the kitchen.

“She always was the best cook around,” he tells me, “She had me and my siblings in the kitchen just about every day. I can remember her blanching Silver Queen corn in the dishwasher, or tossing the collard greens in the washing machine to clean out the grit. She made food familiar, homey, a way to connect. She’s the reason I ended up at the Art Institute in Atlanta, getting my degree as a trained Chef in Culinary Arts. It just seemed the natural path for me.” 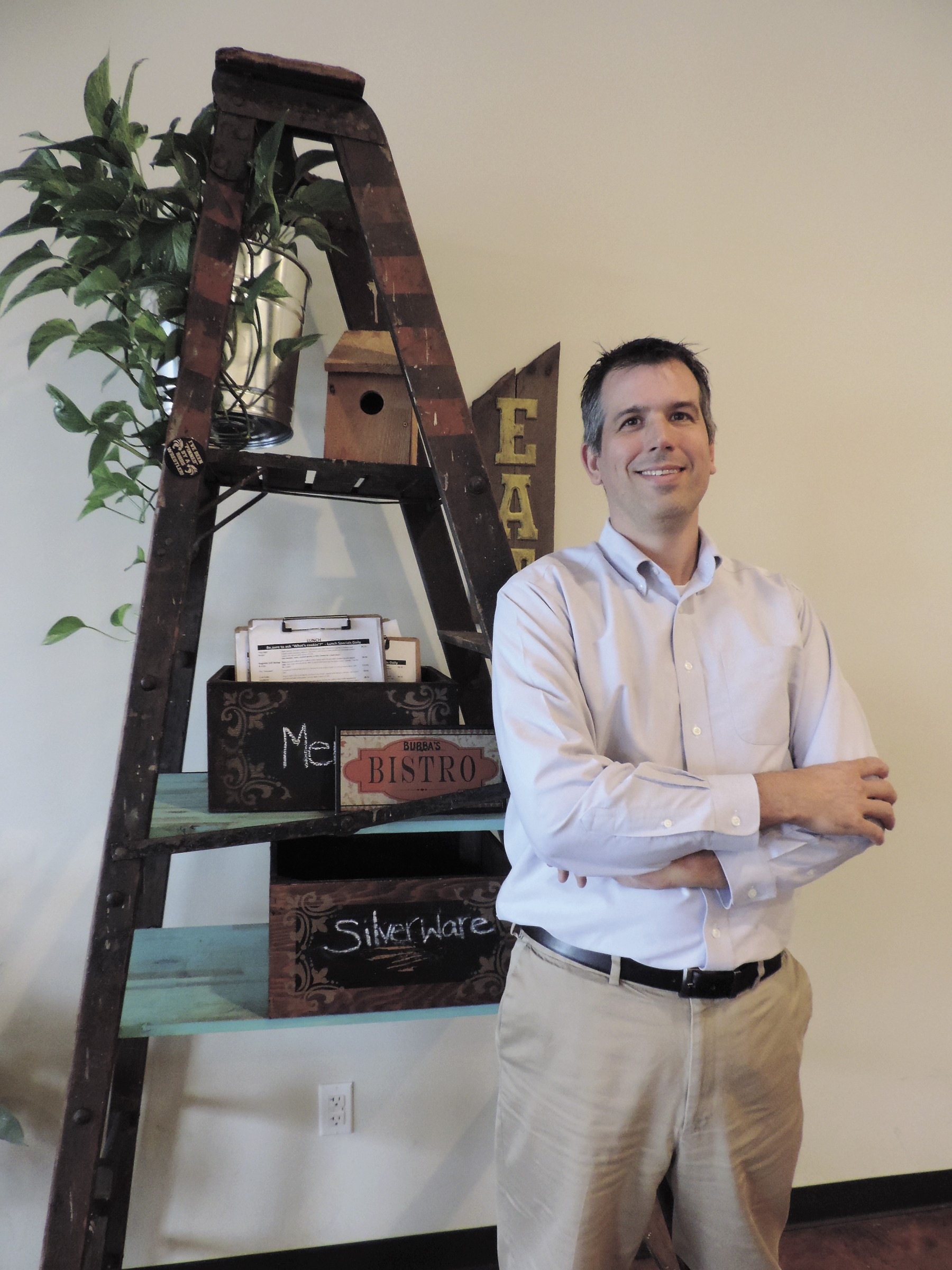 A good chef is made even better by experiencing other venues, other cuisines, and his years at the Marriott in London helped hone his culinary skills. When it came down to it, though, home is where the heart is. A good friend in Richmond Hill asked him to help out with Magnolia Catering, then ended up moving to Mississippi soon after Mark arrived. He had just enough time in, though, to engender a love of catering big events to really take a shine to it.

“Destination weddings are really our forte,” he says,” and when my buddy left he asked me if I’d take over those last three weddings and finish up with them, I was happy to do so...but the three weddings turned into six, then branched out into 12 and more, and there you go—I ended up expanding the business on the strength of our menu and fine customer service.”

Just ask Blakely Vinicky, a bride whose wedding was made so much more memorable by Mark’s personal touch: “Bubba’s Bistro did the most unbelievable job catering my wedding and I can’t imagine having used anyone else. Mark took away any and all stress that may have been related to the food and catering. He built a custom menu based on our wishes and budget, and created a one-of-a-kind authentic Chicago hot dog bar for a late-night reception snack. The food was absolutely delicious and our guests are still raving about the shrimp ‘n’ grits!”

Therein lies the quality which brings folks from all around the county to sample the goods: That lusciously creamy Shrimp ‘n’ Grits. Oh, and his mama’s pickled vegetables, from an old family recipe. And don’t forget the lusciously golden fried chicken, marinated overnight in buttermilk & Texas Pete hot sauce.

His London years inspire the very popular Steak n’ Guinness pie, served each Friday for dinner, and his half-pound double ground beef burger already has a slew of fans. “People love the taste of real beef!” he says.

Mark and his wife Corrie, his partner in life as well as in the restaurant/catering biz, are kept pretty busy with their family of four kids, aged 3-11, and yet, they have managed to make Bubba’s Bistro a kind of local foodie haven.

“My mother’s recipes make dessert something special here. It could be something as simple as banana pudding or a rich peanut butter pie topped with chocolate, but, like everything we make here at Bubba’s, you can be assured it’s all created from scratch, down to the buttercream icing or coconut-pecan topping!”

Even in the backwater land of Richmond Hill, Bubba’s Bistro gathers crowds with a beautifully appointed Sunday Brunch buffet that has become a sort of social gathering place for former catering customers, who enthuse volubly about the food, as well as curious newbies.

The sausage is handmade, with just the right amount of sage and a touch of ginger, and the bacon comes in big, wide, crispy strips, and the massively popular Shrimp ‘n’ Grits makes a star appearance every Sunday, sometimes accompanied by a tasty jambalaya.

An omelet station filled with fresh assortment of chopped vegies and meats, a carving station, and a lovely array of both breakfast and lunch items, encourages you to stay a while.

Putting to use the years of experience at the Richmond Hill Methodist Church BBQ sales events, Mark smokes all his own meats in-house, so if you have a yen for BBQ, it’s tasty, juicy and full of fine, smoky flavor. The smoked butts, succulent prime rib and salmon are offered as specials during the week, so check their Facebook page when making you dinner plans.