When Bud Green was younger, his grandfather gave him a collection of black and white family photos. He was instantly captivated by the photographs.

“I said, ‘Wow, there’s something about them,’” remembers Green. “‘I want to have something like this to hand to my grandkids someday.’ I spent a lot of time trying to figure out what makes them work, because they’re evocative in a way.”

Green loved the way the photographs looked, but wanted to understand how he could replicate the feeling. To figure it out, he began studying black and white photographers working at the turn of the century, notably Henri Cartier-Bresson.

“I liked the composition of his photos,” he shares. “Even though he was taking an entirely different kind of picture, like of war-torn Europe, it was different subjects but he’s using the same [tools]. I really like the geometry and the simplicity of the compositions.” 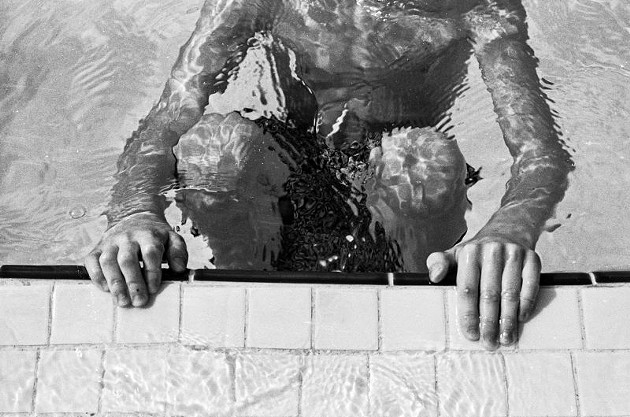 It was then that Green discovered he was interested primarily in the composition of his photographs, and that realization spurred an entire body of work.

“With the compositions, I try to make them as spare as possible, which usually means getting a little closer and simple,” he explains. “Anything in the frame needs to be there. If there’s anything superfluous, maybe I’m not close enough.”

The photographs in “Leitmotif” are all so strongly composed that, just like Cartier-Bresson, they make stunning shots out of daily occurrences. Green often uses shadow and blur to enhance the photo’s movement, and the absence of color lends a simplicity to the photograph.

The common thread of the exhibition is simply the aesthetic of each photo. Green notes that the photographs were taken at all points throughout his career, in all different places.

“There’s stuff from Italy, there’s stuff from West Virginia, there’s a couple things from Savannah, but there’s something that connects them all,” explains Green, “and I think when you see them all together, you can see that. Sometimes it’s a geometry aspect of it—the light, the lines, the shapes—but even though they’re all different subjects, they all sort of connect.”

Part of the reason for the eclectic subjects is Green’s method of photographing. His biggest inspiration comes from walking around and taking photos—he’s always got his camera with him.

“I don’t really go out and say, ‘Okay, I’m going to take a series of this subject or this event.’ I usually just try to keep my camera with me if something catches my eye,” Green explains. “Sometimes it works out, sometimes it doesn’t, but I don’t really know what I’m looking for until I see it.”

One of those subjects, naturally, was Green’s kids. Like any dad, he took a lot of photos of his children when they were growing up, but he strived to stay away from typical family photos.

“Kids aren’t conditioned to look at the camera and just smile,” says Green. “And to me, when they’re smiling, it sort of blocks the real thing they’re thinking. I tried to condition them not to do that, but sometimes I like eye contact with the camera, sometimes it’s not necessary.”

In one of Green’s strongest photographs of the series, his son is holding onto the sides of a swimming pool, his body obscured by rippling waves, creating an abstract feeling.

“I’d never be able to go out and find that—I just happened to be standing there,” recalls Green. “I remember when I took it, I just took one shot and walked away and said, ‘Ah, I’ve got to quit wasting film.’ Then through the roll I was like, ‘Wait, that was kind of cool!’”

Green’s approach to photography is refreshingly simple. He remembers wanting to begin taking photographs, “for the sake of taking a picture,” in 2005 or 2006.

As luck would have it, the way Green got the show at Location Gallery was by, again, walking around.

“We live right down the street from the gallery, so we go to the shows on Friday nights, and I got to know [gallery director Peter Roberts] through that,” he says. “He had a couple of different group shows, and I put a couple photography pieces in, and it just led to this.”

The gallery profits from the show will be donated to the Savannah Philharmonic Orchestra, of which Green is a board member.

For being in Savannah just two years, Green loves it and the feeling of community. While this is just his first show, keep an eye out for this photographer, who’s sure to get picked up for some more shows.

“I haven’t put a lot of effort into showing stuff,” he says. “I get some opportunities and I enjoy it, but mostly I just like taking pictures. I would take them for myself even if I never showed them.”