Burning Mansions, Now You See Them 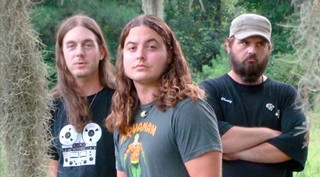 Effingham County native Jonathan Murphy is just 25, yet he's clearly got an old soul. His singing voice was tilled and nurtured by his childhood adulation of great vocalists from Jackie Wilson to Otis Redding to Paul Rodgers, and he makes these R&B-based heavy rock songs sprout and blossom and reach for the blinding sun.

Burning Mansions is the best unknown band in Savannah. Don't take my word for it - pick up the impressive Labor Day CD (all songs written by Murphy), and/or check out this show at Retro. There isn't another group - certainly no other bare-bones trio - as unique as this.

Burning Mansions started as a vehicle for the songs that didn't work with his other band, the blues-based Jon Lee & the Canebrakes. "With Burning Mansions, it's basically everything that's not blues," Murphy says. "It's a funky band. We try to do a lot of more prog-ish sort of stuff."

His dad, Murphy explains, was an "old hippie" who turned Junior onto Stax and Motown, the Beatles, Hendrix, Badfinger and Robin Trower. "Throughout anything that I write, there's some hidden influences that come out, that I may not consciously do," Murphy says. He's also a huge fan of Tom Petty & the Heartbreakers.

It's easier for the Canebrakes to get gigs, Murphy says, because the blues/rock formula is an easy one to explain to clubowners and potential fans. "With Burning Mansions, the one place that's had us back several times is Huc-a-Poos," he adds.

"It's like there's something weird out on Tybee - you got a old of old hippie-type people out there that appreciate this sort of stuff." Hear Burning Mansions on the band's Facebook page.

NOW YOU SEE THEM

Mencer calls Now You See Them a "three-piece busking band," and they began life together as just that, playing on streetcorners in Sydney, Australia (before the government discovered they had no work visas, and deported them), and in New York, and in Hawaii. Somehow, they wound up in North Carolina.

The three still enjoy the occasional street-busking gig in Asheville; Conerty offered this advice in a Carolina newspaper story: "Do it often if you're going to do it and take it seriously. If feel there are a lot of people out there that do that and expect the same results, monetarily. When we (busk), it's almost as serious as a gig. It's also important to have something that draws people in, because it's difficult to hear lyrics in passing on the street." See nowyouseethem.net