Bus stops in the dark 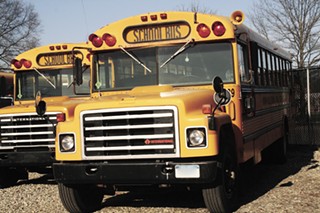 Savannah/Chatham public schools contract bus services from the firm First Student, a multinational conglomerate with U.S. offices based in Cincinnati.

THIS WEEK is the beginning of the year for Savannah/Chatham public schools, and with it a miserable ritual known too well to too many parents: Getting up way too early for a school bus ride that's way too long.

Bonnie Godbee’s child attends Garrison School of Visual and Performing Arts, a K-8 specialty program school. The assigned bus route this year has her child at the bus stop at 5:45 a.m., for a school start time of 7:55 a.m.

That’s not a typo.

“To get eight hours of sleep we’ll have to be in bed by 8 p.m. How the hell is that going to happen?” exclaims Godbee in frustration. “Maybe we’ll have a goal of a 10 p.m. bedtime and see who can function on six hours sleep.”

Referring to the seemingly inefficient bus route, the Bloomingdale resident says “I live three miles from I-16. Why can’t the bus get on the Interstate and head to Savannah from here? Why not leave the bus depot, start the route on Highway 17, come down Highway 204, and get on I-16?”

Incoming School Board President-Elect Jolene Byrne finds herself in an odd, though not necessarily bad, position.

Despite the frankly weird, unusually early timing of her May election and subsequent victorious July runoff, she won’t actually be sworn in until January 2015.

That at least gives her plenty of time to get up to speed on the many challenges she’ll face, such as bell times and bus routes.

“It has a lot to do with First Student and their logistics,” Byrne says, referring to the private company contracted by Savannah/Chatham to run the bus system. “And also, frankly it has to do with poor planning. You’ve got elementary and middle schools all across the county starting earlier basically so that three high schools can start later. It doesn’t seem to make a lot of sense.”

While Byrne acknowledges that most research shows that younger children are more conducive to an early start, “earlier in that case means getting up at 7 a.m., not 5 a.m. so they can go wait on the bus in the dark.”

“I don’t believe any grade should start school before 8:30 a.m., based on how much sleep a child needs,” she says.

“I also feel with the amount of homework they do and the afterschool activities our children are involved in, there’s no way they can get a good night’s sleep if they have to be awake before 5 a.m.”

Unfortunately, the school board approved this year’s bell time change for two years, despite a majority of parental input asking that bell times stay the same.

Byrne says “they can always override and redecide it. I wouldn’t be surprised if these changes don’t make it to the second year.”

In a perfect world, Byrne says, elementary and middle school kids might start school somewhere in the 8-8:30 a.m. range, and high schoolers between 9-10 a.m., to account for the teenage brain’s scientifically documented need for more sleep.

“We’ve known for more than a decade that high schools should start no earlier than 9 a.m.,” she says.

Of her own situation, Godbee explains:

“Most people just say ‘well, you chose to send him to Garrison.’ But we actually chose to attend Bloomingdale and then the BOE moved the program to Garrison. Should I have had to move into town? I’m aware my child chose to go to a specialty program, but he shouldn’t be punished with a two-hour bus ride.”

For awhile Godbee did try and transport her children by herself, without relying on First Student.

“We would sit in traffic for 45 minutes. I used a tank of gas by Wednesday of each week. It was unaffordable,” she says.

“I do have the luxury of being able to take him, while going broke, but I don’t think working moms have that choice.”

The school district itself is undergoing major change, with a surge in interest both in the charter school concept and in the idea of making more schools, like Garrison, K-8 rather than the traditional elementary/middle school model.

“The specialty programs and the switch to K-8 have definitely made more of a challenge,” Byrne says of the transportation issues, “but then again some K-8 schools are neighborhood schools, like Georgetown.”

As for the issue of the screwed-up bus schedules, Byrne says at the end of this school year “we’ll have to look at the numbers and see if more of the families living the farthest away are dropping out of specialty programs.”

For the issue of bell times, Byrne says an increase in behavioral problems at the elementary school level might be a leading indicator that too many kids are coming to school sleep-deprived.

Godbee has some practical advice for the board from a parent’s perspective:

“Utilize the unused buses at First Student. Hire more drivers. Have all bell times between 8:15-8:30 a.m. And choose a route that makes sense.”

Editor's Note: It’s not Jolene Byrne who needs to go