She Returns From War is set with new album, Savannah dates

"I think I was delving way deeper," Hunter Park says of new album

Faline, She Returns From War

HUNTER PARK is ready to pull you back onto the dancefloor.

As the creative force behind acclaimed Charleston-based cosmic Americana band She Returns From War, Park captured audiences with her 2015 full-length, Oh, What a Love. The album, released on 10 Foot Woody Records, was named among the year’s best from numerous outlets and turned the spotlight on Park’s dreamy, rootsy blend of language and melody.

This spring, Park will unveil Mirrored Moon Dance Hall, her strongest work yet. The bones of the fourth release are classic She Returns From War: songs that delve into a glistening kind of Americana, flirting with blues, folk, and dream-pop along the way; down-to-earth stories stitched together with a neon thread of mysticism.

She Returns From War, full band.

But having Ryan Wolfgang Zimmerman at the board elevates Mirrored Moon Dance Hall into the complexly sonic journey that it is.

Appropriately crowned “Best Producer of Everything” in Charleston City Paper’s annual awards, Zimmerman has recorded the likes of Band of Horses, The Steppin’ Stones, Grace Joyner, and many, many more, and worked closely with Park to develop the She Returns From War sound.

Perhaps the most direct parallel to Zimmerman’s work on Mirrored Moon Dance Hall is & I’m Fine Today, the Zimmerman-produced Susto album that took the Charleston group from dirt-on-the-boots Americana-folk to a deep, spellbinding mixture of tone and genre that exposes the raw soul of the music. It’s a similiar journey for Mirrored Moon Dance Hall: A warm, insistent kick drum demands the listener sit upright and listen as the record kicks off with “Psychic Voyage.” The unique texture of Park’s voice is perfectly captured, and a laundry list of special guests help flesh out the sound.

“I was able to call more of the shots,” Park says of the recording process. “Working with Ryan is amazing, because he was like, ‘I like the first record, but I want to see you flex your muscles on this one.’ And it’s a community record—lots of people are involved on this record, so it’s pretty meaningful in that. There are so many Charleston and Columbia artists that make appearances....Jordan Igoe, [members of ] ET Anderson, Brave Baby, Susto, The Artisinals...the people who are on this record shape the way the record sounds, too.” 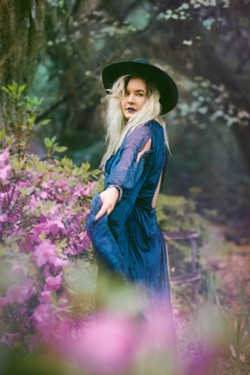 Hunter Park of She Returns From War returns with a new record.

Years of supporting fellow local and regional musicians built a strong sense of trust, and Park felt comfortable allowing her collaborators a lot of creative freedom.

“They know me very well,” she notes. “Seeing them try to attach to my songwriting was a really interesting process. People come from such different directions stylistically and writing-wise, and that’s the magic of music.”

Leading up to the album’s release, Park will release a string of visuals via Facebook and Instagram, teasing songs from the record. In the short videos, a neon sign spits and hisses to life and stark white moons cut into black planes.

“Conceptually, the album is about this girl who kind-of-maybe represents me who goes to one of those old dancehalls,” Park explains. “Everyone who’s attending this night there has their personal demons, representing battles with depression and paranoia, heartbreak, all the good stuff.”

“I think I was delving way deeper,” Park says of writing the album. “There’s a lot of mysticism to the lyrics that’s a little different...the records before were a bit more soft. That was definitely a change of pace for me.”

Park is no stranger to Savannah—she’s played solo and with the full She Returns From War lineup everywhere from QuoLab to Graveface to El-Rocko.

She’ll be back to open up for the sensational Mitski on the artist’s “solo tour of beautiful places. ” As a trans South Carolinian who moved back South after some time in New York, Park’s a perfect opener for the show.

“In this certain political climate, it’s easy to write the South off as a birthing ground for the evil around us,” Park says. “In my mind, the South is where people are trying to genuinely fight the good fight to keep progressing. And there’s so many different arts and cultures here that are really beautiful. I think that people ignore that because of certain circumstances right now and we’re trying to get through it and make something beautiful out of a shitty situation.

“Art is a form of education for people, and inspiration is a form of education. If you’re making something that causes people to go out and communicate and express their feelings, I think that can help change the narrative. That just means new Southerners are coming up even stronger in their own values.”

Park will play her upcoming El-Rocko gig with She Returns From War bandmates Camille Lucy Rhoden and JP Chapa.

The lineup fluctuates depending on the setting, and with Mirrored Moon Dance Hall, she’s looking forward to capturing the record’s lush sound onstage.

“We’re trying to figure out ways to build the sound up,” she says. “It’s a lofty goal sometimes!”