By way of Chicago, Fauvely brings emotional dream-pop to town

BORN in Chicago, indie rock/dream-pop band Fauvely actually has deep ties to Savannah. Singer Sophie Brochu started the project upon moving to Chicago, and has released an EP and full-length since 2017. The music is powerful and ethereal, slightly reminiscent to groups like Mazzy Star but also extremely unique and underivative.

Ahead of the band’s show at El Rocko Lounge on Sat., April 20, we spoke to Brochu as well as bandmates Dale Price and Dave Piscotti about all things Fauvely.

Tell me about the origins of this project.

Brochu: This started much after I moved to Chicago. I’ve been here for about 10 years, but only started writing music a few years ago. I actually found myself writing about Savannah on the last album, but otherwise this is all from Chicago.

Having been in Chicago for so long now, does it feel like home? You mentioned writing about Savannah on the latest record. Do you feel as though you still have a connection here?

Brochu: A lot of what shaped my songwriting is the topic of grief. Usually, I don’t necessarily try to sit down and write music. It’s usually something that comes in a process that’s hard to describe. So about a year ago, when I started working on this EP that we’re working on now, one of my really dear friend’s mother was in the process of dying from bladder cancer. I found myself writing this song for my friend, and that became the theme of the EP. It was this intense grief and sadness, but also an appreciation for the moment.

How that ties into the city is that I went through years of grief when I lived in Savannah. But when I look back, it’s such a beautiful place and I had a really happy childhood - mixed with some intense moments of grief.

So now that you have this band around you, how does the writing process look for y’all?

Piscotti: I just joined on in August, and Sophie already had the majority of these songs. So Dale and I, and our bass player Scott [Cortez], kind of do whatever feels the most natural. We just start playing, and it shapes from there.

So everybody kind of knows if something’s working and if it gels.

Brochu: Yeah. And I think it’s important to be open to ideas, even if it’s not working. Just to let things develop. 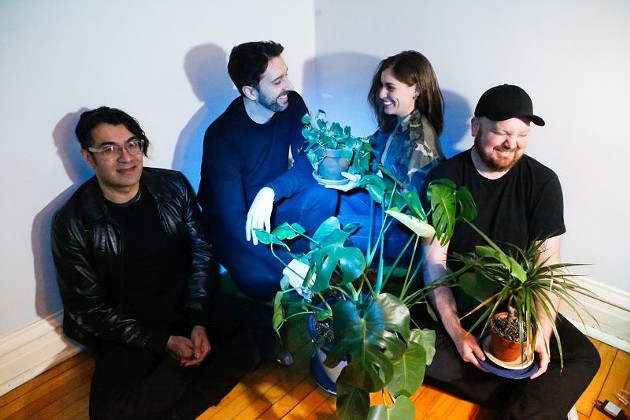 How long did it take you, Sophie, to find this band? Especially with the songs being so personal.

Brochu: I actually had this terrible idea in the beginning that I would have a rotating lineup of band members. It didn’t really work [laughs]. Dale had been there all along, and he plays on and off with me. So when I finally came to the conclusion that having to keep teaching people the songs and starting over from scratch wasn’t working, I knew Dale was the right fit. We’ve gone through changes with instruments and other people as well.

I think a lot of it is just about knowing that we all bring something very different to the table, and finding that balance.

Price: I started playing [with Brochu] in 2016, and this is the sort of music that I listen to constantly. Now that the lineup is solidified, it’s a lot easier because everybody knows the songs really well. So we can give each other honest feedback.

It seems that everyone really understands this music and where it comes from. How did all of that fall into place?

Brochu: We do have a lot of the same influences, but some are different. I think when we’re actually working on music, the influences are more subconscious. So I think we all kind of have that subconscious thing. So much of this music is emotionally driven and driven by feeling. It’s not very technical, so I think a lot of it is about letting the song have a life of it’s own and decide what it needs and doesn’t need.