It’s All in Black and White

The Art of Cal Wood

ARTIST CALVIN THOMAS describes himself as a "late bloomer."

For him the journey began in 1990, when a twenty-something Thomas bid farewell to his small rural hometown in middle Georgia.

“I moved to Savannah and I’m from a small town, so Savannah is a big city,” Thomas smiles.

Here, he found the culture he’d longed for as a kid.

“We didn’t have art in our school system. I wasn’t subjected to art by any other means than perhaps a magazine or the TV,” Thomas says.

Savannah offered new artistic encounters and perhaps most influentially, introduction to SCAD and its students.

“Certainly moving here and being exposed to the Savannah College of Art and Design, it just ignited a fire within me. I started to make friends that went to the college, sort of living vicariously through their art lives,” Thomas says.

He landed a job at SCAD in ’99, which offered his dream employee benefit—one free class a quarter.

Several years later, he enrolled full-time, working towards a degree in fashion. While Thomas never completed his degree, the experience was profound.

“For me it was just heaven because, a poor small town boy going to a private art college that was ungodly expensive, that was an accomplishment just in its self,” he says.

“It felt right. It was just meant to be. It was time for me to discover who I am.” 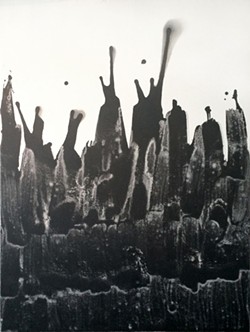 No longer enrolled and entering his 40’s, Thomas’s personal progression reached culmination in the wake of grief.

“In 2005 when my mom passed away, at that point I said to myself, ‘Okay, Calvin, whatever you feel it is you need to be doing, you need to start doing it while here on this earth now,’” he says.

“I remember buying paint, canvas and brushes. When I finished that first piece of art, my life changed. I had finally done something with my own two hands that no one could take from me. That’s what I needed at the moment—something that would sustain me for the rest of my life, not just a quick fix,” Thomas continues.

“Typically the grid is a sense of direction, a sense of movement. You’re going. Life is happening. When you get those grids and those under-layers, that represents history has been made,” he says.

While building layers, Thomas identifies “abstract figures,” often silhouettes. “I form a bond with it, become friends with it and interact with it,” he says. 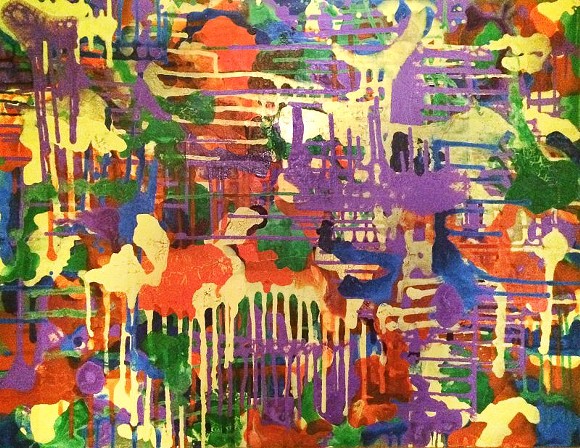 He grapples with identity through personal, cultural and historical roots—his childhood in the South, his mother’s experience as a single parent and field worker, slavery, and the joint history of all Americans.

“Quite often when I use black and white paint. It’s a reference to black and white Americans because the conflict that we shared throughout our history in this country, it’s so tragic. But when you put those two colors together they look beautiful and work well together,” Thomas says.

Color is a powerful force in his work. “Solution” evokes a sense of “bloodshed” through “vivid and pungent” red.

Tucked within the linear paint strands are suggestions of portraits—faces lost to past horrors.

“During slavery, during the civil war, all the blood that was shed when slaves were murdered, raped, beaten and when northerners and southerners were killed—there was such bloodshed during these periods of our history,” Thomas reflects.

Currently, Thomas’s work is on view at Zunzi’s 2 and Exit Strategy. Like most of his exhibitions, his art brings life to local businesses. Since 2009, Thomas has exhibited his works at a dozen local spots including Lulu’s Chocolate Bar, Sentient Bean and Belford’s.

After years of exploration and trial, Thomas has truly come into his own—as an individual and a creative.

Summing up lessons learned, Thomas—one to quote popular figures—turns to a hip-hop legend.

“LL Cool J says something that has always stuck with me—‘You can’t let your history hold your future hostage.’ For so long I let my background, my history, hold my future hostage,” he says.

“It’s never too late to find your passion and luckily later in life I found my passion as an artist. When I say that I am an artist, it feels right,” he grins.

More »
More Art Beat of Savannah »
All Arts & Entertainment »
Comments (3)
Add a comment
Subscribe to this thread:
By Email