From the ashes of a Christian summer camp-turned-arts colony, a new sound emerges

Camp Saint Helene only has one song out publicly, but it was enough to make a huge, lasting impression. Immediately, you hear echoes of 60s California folk rock mixed with the monotone melancholy of bands like Mazzy Star, all wrapped up in a vibey haze. The band’s first single, "Farfisa Song," is spacious and audibly analog; the perfect introduction to a band that will hopefully soon be on a lot of people’s radars. It’s the first song from an album set to be released later this year.

The band is embarking on their first-ever tour, and we caught up with all of them—vocalist Liza, guitarist Dylan, bassist Wesley, and drummer Alex—ahead of their stop at El Rocko Lounge on Fri., June 28, to learn about their unique beginnings and their old school approach to recording. 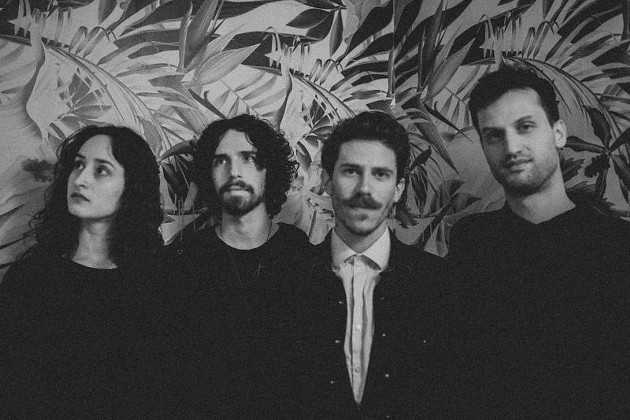 I was immediately struck by the sort of 60s folk rock vibe in the single, but there’s also a bit of Mazzy Star happening. Tell me about this band’s influences and how you got started.

Dylan: Liza and I have been playing music together for a few years, and just trying to explore what the right sound should be. We kind of did land on something that felt right to us—kind of within what you just described. Bands like Mazzy Star are definitely an influence, and I think we definitely sought to reach the nexus of the soft, folky warm kind of vibe and kind of a darker, more mysterious and witchy vibe.

I think that 60s influence was emphasized by the way we recorded at Alex’s studio, Basement Floods, which is an all analog studio.

Alex: We did the record on eight tracks, so we have mono drums and some stuff stacked on one track. But yeah, Dylan had some very specific sounds in mind. We grabbed some [influence] from The Zombies, and Black Sabbath is kind of a spirit animal of this band. We don’t necessarily sound like them, but we felt a lot of that stuff.

Liza: You mention Mazzy Star—Dylan and I had started writing this stuff when we were down in Brooklyn, and then we moved up to the Catskills area on this really weird property, which was a former Christian summer camp, which later turned into an arts colony, and is now just a beautiful land with all of these Jesus and Mary statues everywhere. It’s so beautiful, and the first record that I had on repeat when I moved up there was So Tonight That I Might See by Mazzy Star.

We moved in a rainy month, and it was very spooky but alluring. So yeah, we’d been working on these sounds for quite a while but they really started developing when we moved up to the Catskills.

Have you guys been playing live for a while, as you’ve been honing this band’s sound? Or did you try to focus on building the material first before getting out and playing?

Liza: I’d say a little bit of both. Dylan has been playing music for quite a while and I’m very new to this, so we teamed up and started writing stuff. We started playing as a duo, and then we found Wesley and Alex. They joined and really started helping us shape a lot of the songs, specifically when we were recording the album. We’ve been playing locally, and this is our first tour moving out of New York state and beyond. It’s been this very organic process.

Recording to tape is something that has a unique sonic quality to it, but there is also the limitation of not being able to do something 8,000 times until it’s “right.” It’s a very special and unique way of recording. Do you feel like that lent itself to the recording process?

Liza: I’m pretty new to the whole recording thing, but I’m an analog photographer. So when we met Alex and found out that he had an analog recording studio, it definitely piqued my interest.

Dylan: I have devoted my time to the world of recording and writing music for quite some time, and I’m very passionate about the quality of analog sounds. But up until the recording of this record, pretty much all of my workflow has existed in the very meticulous world of Pro Tools and digital recording. So it was simultaneously liberating and challenging to do this.

We came in pretty rehearsed with everything, so that in a sense eliminated one of the variables. But we pretty much could only afford one reel of tape, which meant we only had space for one take per performance. So if something was 90 percent good, we had to make the decision to either record over it and see if we could get it to 95 or 100 percent. So it certainly was a big challenge, but it was a really good feeling to burn through the majority in three days. We flew the tracks into the digital domain at the very tail end and did a little cleanup, but the meat and potatoes was all analog.

Alex: I record analog every week, but even to this day it still is thrilling and exciting to do something like punch a bad bass note [on tape]. Your heart rate picks up a little bit right before you do the punch, you know? Printing mono drum mixes, people can’t believe that sometimes [laughs]. But if it’s coming out of the speakers and it sounds awesome, why not print it that way so that everyone else can hear how awesome it sounds?