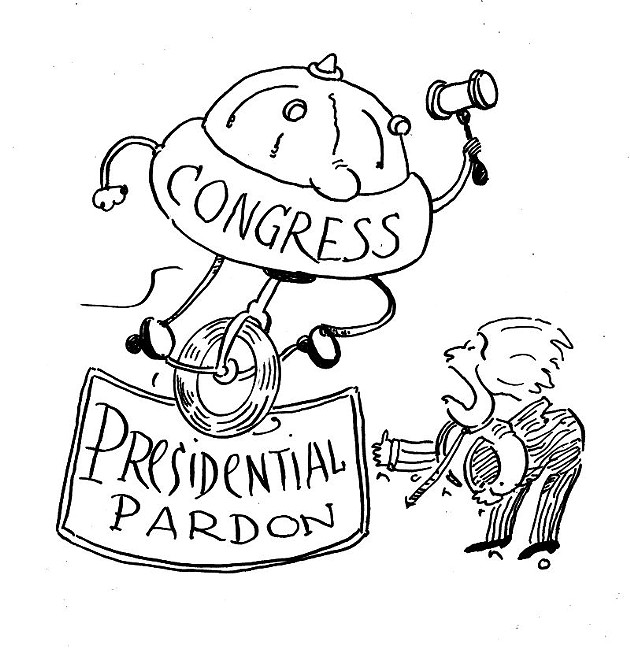 I see where you’re going there, Indy, but the scenario you’ve cooked up won’t work. Presidential pardon power extends only to federal crimes, whereas Cosby was convicted under the state law of Pennsylvania. It’s simply not the president’s jurisdiction. This may come as some surprise to the current officeholder, who last year tweeted that “all agree the U.S. President has the complete power to pardon.”

But say Cosby had been convicted on federal charges, and say Trump pardoned him. For Congress to block such an action would require not just a law but an amendment to the Constitution.

The power of executive clemency derives from Article II, Section 2, which permits the president “to grant Reprieves and Pardons for Offenses against the United States”; an 1866 Supreme Court decision affirmed that it “cannot be fettered by any legislative restrictions.”

If you’re looking to challenge a presidential pardon, then, don’t call your congressperson—call your lawyer, because the real action is in court. Take Trump’s first pardon: that of Joe Arpaio, longtime Arizona sheriff. In 2011 Arpaio was ordered by an Arizona judge to stop racially profiling Latino drivers; in 2017, a second judge found him in violation of the earlier order and convicted him, in a bench trial, of criminal contempt.

We’ll pause here to consider the well-established conventions surrounding the pardon: it’s typically given, after consultation with the Justice Department, to people who, having admitted guilt and expressed remorse, petition the president for mercy. Alternately, a pardon may be issued when the president deems it in the public good, the most famous example being Ford letting Nixon off the hook for Watergate. So Trump’s already swimming upstream here.

Still none of the above makes the Arpaio pardon legally invalid. Where things get interesting is that Trump pardoned Arpaio not for any old offense but specifically a contempt conviction. He wasn’t extending mercy so much as second-guessing how a federal judge runs her courtroom.

One open question is what happens when the president, in exercising power as enumerated, bumps up against some other part of the Constitution. In an article last November, legal scholar Kimberly Wehle offered the hypothetical of a president effectively invalidating a new law by preemptively pardoning anybody who might later break it. That wouldn’t fly, Wehle contended, as it would infringe the authority of Congress to make laws in the first place.

Trump’s action in Arizona is analogous—or at least that’s the argument made by critics, including a group of House Democrats, who in an amicus brief claimed the pardon represents “an encroachment by the Executive on the independence of the Judiciary.” The judge in the case subsequently refused to grant Arpaio’s post-pardon motion to get his conviction thrown out, leaving the former sheriff in legal limbo: he’s been pardoned by the president, but the court won’t clear his record. Arpaio has appealed.

As various investigations into Trumpworld heat up, another Democratic representative has introduced a constitutional amendment that would curtail a president’s ability to pardon the president’s own family members, campaign aides, appointees, or other staff, thus relieving them of the pressure to testify to any executive misdeeds. The amendment—which stands not a snowball’s chance of going anywhere, of course—also proposes to take care of the big orange elephant in the room, prohibiting the president from pardoning himself.

Could he do so under current conditions? Jury’s out. The last real word we got was a 1974 memo from the Office of Legal Counsel, three days before Nixon announced his resignation, concluding the president doesn’t have the authority: “No one may be a judge in his own case.”

But that’s an untested proposition that frankly may not remain untested for much longer. Buckle up.