Can you harness electricity from electric eels?

Assume that money and animal-rights groups are no issue. What's the dope on harnessing electricity from electric eels?—Nansbread1 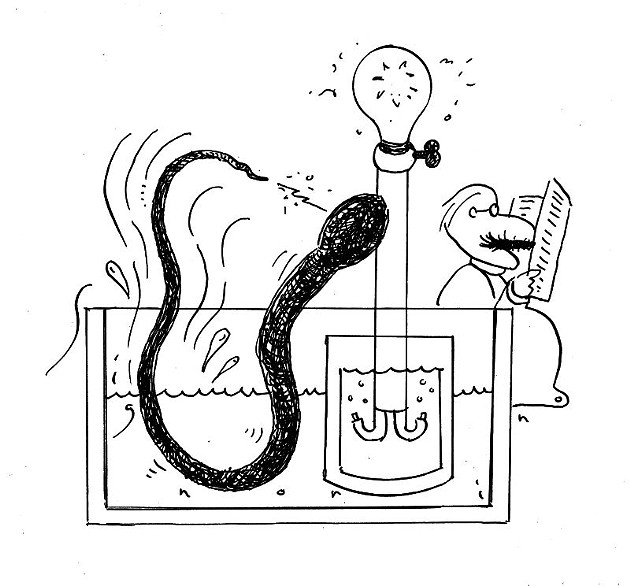 Never mind PETA—those eels can take care of themselves. Often reaching eight feet in length, an electric eel is capable of leaping out of the water to zap you with a charge of up to 600 volts, which probably won't do you any permanent harm but may make you rethink some of your life choices.

And you can’t just trawl for them, either. Electric eels (NB: not technically eels—Electrophorus electricus hails from a group of creatures called knifefish) tend to favor muddy river bottoms and swamps, so they’re not particularly easy to net.

There’s also no track record for breeding them in captivity, so even if you were able to haul in enough starter stock for your state-of-the-art electric-eel farm, you might encounter difficulty sustaining a population.

Theoretically what you’re suggesting is possible, I’ll concede, as evidenced by one aquarium in Japan that hooked up its Christmas tree to a couple of aluminum plates installed in the E. electricus tank. Eels generate electricity as they swim around—they use it like sonar to find their way, among other applications we’ll get to shortly. So when this one moved, the lights on the tree flickered. A neat demo, but also an illustration of one major drawback to achieving your goal at any kind of scale: the electricity is inconstant, and generated at the eel’s whims.

This isn’t to say that electric eels don’t have anything to tell humans about electricity—but the real money is in figuring out how they function and trying to mimic it. Slice open an electric eel and you’ll find three electricity-producing abdominal organs, which collectively take up maybe 80 percent of its body.

Individually the specialized juice-generating cells, called electrocytes, in these organs pack only a minute amount of electrical potential—not too much more than a human muscle cell or neuron. But, lined up like batteries in a flashlight, the electrocytes are synchronized to go off together on command, adding up all those tiny charges into one big one.

Or a smaller one, as needed. Electric eels regularly emit a weak charge for navigation purposes and to communicate among themselves. They can also produce jolts with more buzz, famously to fend off predators or incapacitate prey, but also to track that prey in the murky water—when nearby fish twitch in response, the eels home in.

Bioelectrogenesis is obviously a pretty cool trick, and one that, unfortunately for us, has evolved only in fish—the conductivity’s just better underwater. Still, humans have been looking for ways to to get in on the game:

• Scientists in Shanghai reported last year that they’d used the structure of the eel’s electricity-producing apparatus as inspiration to create “flexible, stretchable, and weavable” fibers that double as high-voltage capacitors—storage devices for electricity. Couple these with fiberlike solar cells, the idea goes, and weave them into fabric, and pretty soon you’ve got a jacket that’ll charge your phone.

• Back in 2008 chemical engineers from Yale designed an artificial biological cell that does what an electric eel’s electrocytes do, only better: their version could generate 28 percent more electricity, and convert food energy into electricity with 31 percent greater efficiency. In theory, anyway; as of 2014 it was apparently still in the conceptual stages. But the hope is that this might lead to the development of a “bio-battery” to power medical implants and prostheses—one big advantage over more conventional in-body power sources being that if the bio-battery breaks down, it won’t leave a bunch of toxic junk in your system.

As I say, it’s early yet for this kind of research, with seemingly huge untapped potential—the world may well be our electric oyster. Of course, generating electricity within the human body is the kind of notion certain online technophiles can’t help getting carried away over.

I came across one excited blogger recapping that Yale project and imagining even further frontiers in people power: “Most in the Western world are experiencing an obesity epidemic, so we have plenty of chemical energy to spare for producing an electric potential.”

Factory-farming humans for bioelectricity was also the plot of The Matrix, you’ll recall, but heck: we’re racing headlong toward dystopia in any case. Might as well burn off that excess belly fat along the way.