THE VISION for the ambitious – and controversial – Canal District took another step closer to reality last week, as City Council approved a surplus property sale to the developers of an upscale apartment complex there. 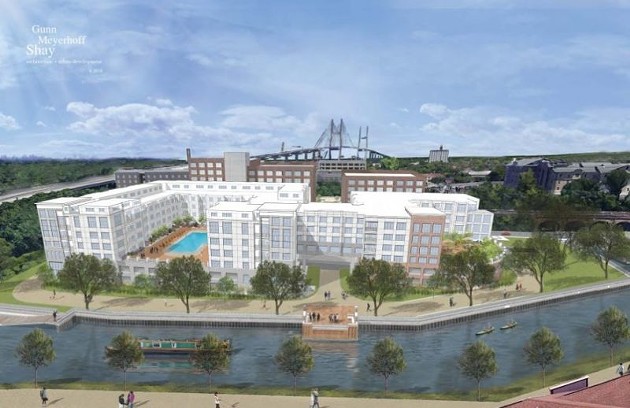 Rendering of the proposed apartment complex, from the Gunn Meyerhoff Shay website

The developers say the complex will serve as the link between the proposed pedestrian loop connecting downtown with the new Savannah Arena, which will be south of the apartments, across the canal.

It will join an array of high-profile, high-dollar complexes popping up all over town, including Starland Village and Spandrel’s 630 Indian Street.

Shay told Council that the complex will boast “amenities usually associated with an upscale apartment complex.”

Alderman Van Johnson, in whose First District the apartments will be located, questioned the need for more apartments marketed to the relatively affluent.

“I’m concerned about the ability of people on normal salaries to live there. Market-rate housing can be quite high and I’m concerned about that, and remain concerned that we don’t have places within the city core for folks to live,” said Johnson. “Is this a place where your run of the mill alderman can live?”

To which Shay responded, “I think the idea is it would be middle-class affordable for sure.”

Johnson worried about the likelihood that the rent at the new development would continue to rise far beyond what the average working person in Savannah can afford.

“Once this area grows, the fact of the matter is it becomes much more valuable,” he said.

To which Shay responded:

“I’m empathetic with your concern, but I’m not aware of any rent control program that the City has in place to limit what apartments rent for in the future,” he said.

“That might be an opportunity for us,” countered Johnson.

The surplus property sale was granted. The 703 Louisville project is the second envisioned for that tract; initially it was intended for student housing.

This prompted Mayor Eddie DeLoach to begin an extended conversation about the increasing phenomenon of one developer getting zoning approval for one project with one set of stated goals, then flipping the site to another developer with a different project, but implied City approval for it.

“We pass changes in zoning for people to develop property that they’re going to buy. They end up instead of developing it... they turn around and sell it. It wasn’t exactly what we thought it was going to be based on what was presented to us originally,” DeLoach said.

“Is there a possibility that we could zone a piece of property for the development of that particular event... and if there’s a question of changing that zoning to accommodate someone else... that we have an opportunity to look at that before it happens?” mused DeLoach.

City Attorney Brooks Stillwell – marking his final meeting in the post before his retirement – basically said, be careful what you wish for.

“You would have to have a zoning hearing on every single development that ever happened in the City of Savannah,” he said. “It would make it very arbitrary on what got developed and what didn’t.”

Stillwell explained that the so-called NewZo comprehensive zoning ordinance, scheduled for a vote in early 2019, is intended to solve the issue of numerous arcane zoning categories.

DeLoach humorously answered, “I don’t set around and read zoning maps. I don’t have the time or the patience to do that. I’m depending on the person up there [proposing the development] to be somewhat honest.”

In other news, City Council held a first hearing for the 2019 City budget.

Some late – and election year-friendly — changes included a property tax millage rollback from 13.4 to 13.2, and a general City employee wage increase of 3.5 percent, up from a proposed 3 percent.