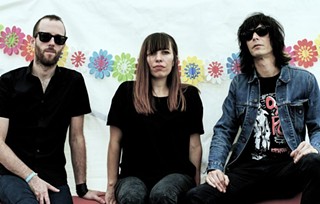 n a rave review, Rolling Stone called Capsula's Solar Secrets album "garage-glam heaven on a platter." Part of that, admittedly, was the fact that the legendary Tony Visconti (David Bowie, T Rex) produced the record to sound like "a fresh afterburn of the '67 Pretty Things and an acid-charged X."

The bigger point, however, was that a music rag of such stature had taken notice of this thrashy psych-rock trio of expat Argentinians living in Balboa, Spain, a band whose trans-global puree of Velvet Underground, Sonic Youth and Stooges records has been the toast of underground South American rock for more than a decade.

The band is on tour with Os Mutantes, which means Savannah gets a rare opportunity to see and hear what all the fuss is about Nov. 20. This interview happened, via e-mail back and forth from Spain, Nov. 5.

The world is such a small place. Growing up in Buenos Aires, why do you think raw American proto-punk and 1970s British glam rock had such a profound effect on you?

Coni Duchess Lisica: I don't know. It's a strange and powerful connection. I think there is some beautiful chaos in the sound of the guitars, and in the voices of solitaire people singing, lighting up city life experiences. As a teenager in Buenos Aires, pre-2001 collapse, I could touch that chaos while walking in the streets. I lived all my life in an uncool neighbourhood in Buenos Aires, dirty and troubling, so some records and particular artists where my brothers and companion through the journey. Some songs and writings, because of the poetry, have the power of catching visions from the past but also from the future so it makes sense that those songs can connect with you any time, everywhere.

Can you describe the influence of Os Mutantes on your band, how they inspired you as Brazilian musicians (assuming they did) and what their accomplishments meant to you?

Coni Duchess Lisica: They are another band crossing the time. Their experimentation with sound and different genres, it's a rare gem. It opened so much our minds. Songs like "Bat Macumba," "Panis Et Circensis" or "O Relogio" are wildly beautiful. They learnt us, they were saying no matter where you come from, dream is a way. Rock and roll is the way.

Why did the band relocate to Spain? Why not America, or the U.K., where a lot of the rock 'n' roll "business" is based?

Coni Duchess Lisica: We love to move around, living a little here a little there. We have lot of friends in the States. But Bilbao is our home. From here we start our tours. It's tiny and beautiful. There is no need to be full time located in America or UK. But you never know.

How did working with Tony Visconti — or any of your more recent producers, for that matter — change your music and the way you approach recording? Do you feel like better, more proficient recording artists now?

Coni Duchess Lisica: To entwine ideas and shapes for sounds with Tony Visconti is such an experience I could have never dreamt it was going to happen. (Can anybody believe that?) We were both band and the producer totally opened to new ideas, but also connected by a dark, aggressive and noir rock and roll side to work for this album. Martin and Tony had so much fun recording guitars, searching sounds, the same with the vocals, he knew what we were passionate about. I don't know if we are more proficient, maybe we are, probably not. We have change, of course, we aim to live inside a recording studio. We love to change because that is what is all suppose to be, about movement.