Legendary grindcore band, made up of two robots and a human, returns to The Jinx

Captured! By Robots @The Jinx

FOR TWO decades, Captured! By Robots has been a one-of-a-kind band. Led by JBOT, albeit against his will, the group consists of one human and two robots. Yes, you read that correctly. For those unfamiliar with the group, it’s literally a band of two robots (who physically play instruments) and their human prisoner.

The robots, along with JBOT, have been staging intense grindcore shows and making complex and aggressive music since their eponymous debut in 1997. Twenty years later, the band is still going strong and is set to hit The Jinx on Sat., Oct. 6.

The beginning of such an ambitious and labor-intensive band came from a simple dilemma – JBOT was tired of playing music with humans. 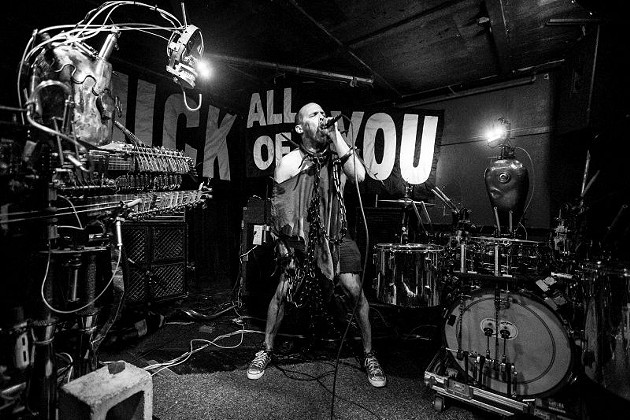 “Have you ever played in a band? You get so sick of bullshit,” he tells Connect by phone while driving through Texas on tour. “You get sick of people showing up late to rehearsal, not wanting to play the same kind of stuff you want to play, not wanting to go on tour because they have a baby now. Oh my god, it’s horrible!”

The idea, he said, came when he was having a difficult time finding a guitar player.

“I’d never built a robot before, but I decided to build a robot guitar player,” he says, adding that the first one he built wasn’t nearly as good as the one he has these days. He later added a drummer, and the band was born.

In the early days, JBOT says, it was extremely difficult to build a robot that could be programmed to play music. He had to “piece together shit that’s not meant to go together,” and scoured the Internet for answers while exploring his early robotic creations.

“Early on, it was all manual. When we first started, I was playing a multi-button keypad that controlled guitar-bot and was playing a two-string bass with one hand doing hammer-ons and shit. It was a horrible one man band kind of thing. It was so bad,” he explains. In the early 2000s, he made the decision to go completely computer-controlled – which took a full year of consulting, researching, and building.

Stylistically, grindcore was something that JBOT says was a natural inclination and was born out of a desire to find the right outlet for his creativity. It took some time to figure out, and the process of landing on grindcore as a stylistic direction was often a frustrating one.

“I was playing doom, but doom just doesn’t work for me so much. I’m too spazzy,” he says. “I fell into doing covers, and found that the band was getting stale. And I just fucking hated it. It was making me crazy. So I kept trying to change the band to be something that I wanted it to be, and eventually I ended up just quitting. I couldn’t stand it.”

“When I was re-starting it, [grindcore] was all I listened to. It was the only thing I could do that made any sense for me. It’s what I love, and you have to do what you love regardless of consequences. Grindcore is really angular. You can do anything with it.”

The music lends itself well to brutally honest subject matter, which JBOT doesn’t shy away from tackling. Race and white privilege, in particular, are important issues for the musician, who says there’s some progress being made for people who have been on the receiving-end of unspeakable racism in America. The addressing of these issues in music is something that JBOT feels isn’t quite happening yet, explaining that he feels like there’s “resistance” from people in bands to write about tough topics.

When it comes to being captured by his robot masters, JBOT says the daily grind of touring with, loading in, setting up, and breaking down robots is a prime example of how he’s being controlled. Though it’s no different, in his estimation, than anyone else.

“It’s fucking brutal, man,” he exclaims. “It’s everything for the robots. My whole life is controlled by the shit. It’s a drag sometimes, but what are you going to do? Everybody has a master, so fuck it. What else am I going to do?”