STATELY and motionless except for the occasional flick of his tail, Pepper stands under the cluster of live oaks in front of the Hyatt Regency.

He waits patiently as a family from California climbs aboard the white carriage attached to his harness, blinders shielding his peripheral vision.

With a gentle slap of the reins, the dappled gray Percheron gelding crosses the cobblestones to the bustle of Bay Street, past semi-trucks and SUVs, pulling his charges towards Johnson Square for a 45-minute tour of Savannah’s historic district.

It’s midday in July, and the outdoor temperature is inching towards 92 degrees. The summer heat doesn’t deter the tourists, and Pepper will clop through his route four to five times throughout the day.

There will be water breaks and hose downs twice an hour before he takes the 20-minute walk up Wheaton Street back to the stables, where the 15-year-old has his own stall and two spacious paddocks to mingle with his best buddy, Salt.

Such is the life of a carriage horse in Savannah, and the way his owners see it, it’s a pretty good one.

“Technically, this is a retirement job for these horses,” says Sami McBrayer, manager at Historic Savannah Carriage Tours.

“They come to us from the Amish, who use them to plough their fields. They’re so used to working they don’t even know how to take a treat when they get here. We spoil them a lot.”

McBrayer grew up around horses, and her parents, Kelley and John Tarr, have owned HSCS since 2005. The family has a staff of 35 people and maintains a herd of ten horses, seven that rotate carriage tour shifts. The company grossed $1.5 million last year, a healthy chunk counted in the city’s $2.29 billion tourism industry.

“People look at horse-drawn carriages and think ‘how romantic, how sweet,’ but these horses are exposed to danger in a high-traffic, urban environment all day long,” says Marsha Hargreaves of SAA, citing the lines of tour buses, trolleys, cars, motorcycles, bicycles, pedicabs and pedestrians with whom horse-drawn carriages share the road.

“Just because we’ve always had them, does that make it right?” 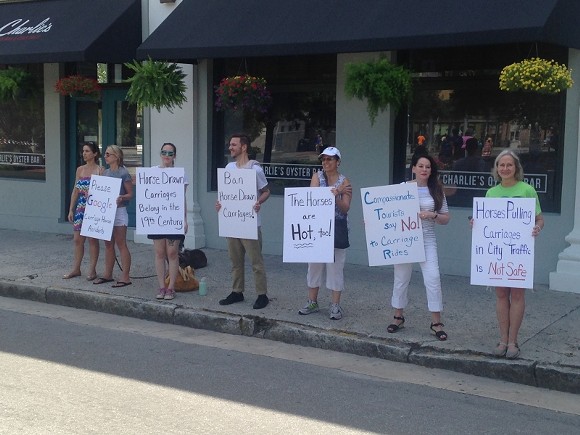 Members of Savannah Animal Advocacy demonstrated on Ellis Square last Saturday to raise awareness of the plight of carriage horses.

About a dozen people gathered along the sidewalk next Sorry Charlie’s, holding signs that said “Savannah is best seen on foot not hoof” and “Compassionate tourists say NO to carriage rides.”

Reactions were mixed. Some cars honked in solidarity, and a trolley full of tourists gave the thumbs-up to the protestors. Other passersby argued that when it comes to animal welfare issues, carriage horses are the least of society’s problems.

The protestors have been working on creating awareness since January, and this was their first public demonstration. On Sunday at the Foundery, Savannah Animal Advocacy also hosted a screening of Blinders, a documentary examining injustice and mistreatment in New York City’s carriage horse industry. The group has plans for more events throughout the year.

The horse-drawn carriage issue is not the first for the animal rights organization. Formed in 2010, SAA works to educate the public about all forms of animal cruelty in Savannah and nearby communities, including testing on monkeys at Alpha Genesis Laboratories in Yemassee, S.C.

Last January when Ringling Bros. and Barnum & Bailey Circus came to the Civic Center, the group staged demonstrations to protest the sideshow empire’s horrific treatment of elephants. Their efforts added to mounting international pressure, and the circus announced in March that it would phase out its pachyderms by 2018.

Mistreatment, dehydration, exhaustion, decreased life span and subjugation of natural instincts are cited as reasons why horses plodding the pavement should go the way of the elephant, especially in the extreme heat of Southeastern summers.

“It’s just plain cruel,” says Ruth Arnone, another SAA activist. “These horses should be in a pasture, not on the street.”

Abuse of carriage horses has been a concern for centuries and was the primary focus of the newly-formed Association for the Prevention of Cruelty to Animals (ASPCA) in 1866. The current horse carriage ban movement has gained momentum since incoming New York City mayor Bill De Blasio announced during last year’s election that he would end the storied rides in Central Park. His proposed ordinance appears stalled among NYC city council members, but a similar ban was passed unanimously in Salt Lake City, Utah, last November. In Puerto Rico, all horse-drawn carriages were removed from the streets of Old San Juan by executive order in April after photos of a collapsed horse circulated on social media.

In Savannah, where horse-drawn carriages represent a high-profile tourism activity and a $1 “preservation fee” from every ticket sold goes to the city coffers for visitors’ center maintenance and monument upkeep, a ban seems unlikely. However, reformations of the city’s policy with respect to horses and summer heat were announced Friday.

“The City of Savannah has been actively working with all the carriage companies since fall of last year to modify the horse heat policy created in 2011,” says Bridget Lidy, director of the city’s Tourism Management & Ambassadorship Department.

“After last year’s heat wave, we realized we needed to come up with a better standard so that when it does get extremely warm, we can work with the carriage companies to get the horses off the streets.”

Revisions include lowering the allowable outdoor temperature (provided by the National Weather Service station at Hunter Army Airfield) from 99 to 98 degrees and the heat index (a combination of temperature and humidity that reflects how hot it actually feels) from 120 to 110 degrees.

Carriage companies are forbidden from operating on city streets under those conditions, but their horses have the option of remaining at their stations to prevent any further danger from walking back to their stables.

The amended heat policy will be added to the horse-drawn carriage ordinance currently under review, and the changes are some of the first updates the since the ordinance was created in 1977.

“Back then, there was a lot less traffic, a lot less visitors. So now we’ve done an extensive survey of other Southeastern communities and how they handle their operations of carriages,” says Lidy, noting that San Antonio, New Orleans and Charleston provided helpful comparisons.

“The companies are all on board with the heat ordinance revisions, but they usually pull their horses off the street before it gets that hot anyway,” she says.

McBayer confirms that HSCT takes Pepper and the rest of horses off the clock any time they exhibit symptoms of heat distress, including heavy breathing, lethargy and an absence of sweating.

“Foaming is actually a good sign; it means they’re hydrated,” she explains.

McBayer adds that the herd is examined regularly by the company’s personal veterinarian and UGA’s veterinary hospital as well as during mandated appointments with the Dept. of Agriculture.

“Even if we were the horrible, money mongerers that people think we are, there are still a lot of other people making sure these horses are healthy,” she says of accusations that carriage companies exploit their animals.

McBayer also takes umbrage with the photos circulating of carriage horses bleeding and in distress in other cities, saying that they are misleading.

“We’ve never had a horse collapse on the streets of Savannah.”

Still, the members of Savannah Animal Advocacy say it is only a matter of time before horses and traffic collide.

“No matter how beloved, well fed, watered up, cooled off, rested, happy, recreated, clean, and healthy a horse may be, a horse pulling a carriage full of people alongside, in front of or behind a car is unsafe,” argues Hargreaves.

“It is a recipe for disaster and tragedy played out multiple times in multiple cities.”

No horses have ever been reported injured in traffic in the city’s historic district. But the McBayer’s company did make national news in 2014 after one of its horses escaped its bridle and took off down Congress street, its carriage smashing into cars as riders leapt off screaming.

McBayer identifies that runaway horse as Oscar, a five-year-old gelding. She reports that Oscar is now happily serving as a riding horse on a nearby ranch and says other horses too skittish, old or otherwise unfit to work the carriage beat are sent off to live out their days in more agreeable pastures.

McBayer says she holds great respect for the activists and hopes they will visit the barn and learn more about how her company treats its four-legged employees.

“I have a lot of compassion for people who are concerned about our horses. We feel the exactly same way.”

On Saturday, the horse carriage drivers appeared to be avoiding the carriage stand next to the protestors and riding down Barnard Street instead. But the animal advocates insist that their aim is to educate the public and that they are not seeking confrontation.

Asked if they would be open to collaborating with Savannah’s carriage companies to find a way to be involved in helping ensure their safety, some activists took a cooperative stance.

“I would consider that,” says Arnone. “Anything that improves the welfare of these animals is OK by me.”

“Our number one goal is a ban on horse-drawn carriages, but right now we just want to get the conversation started,” affirms Hargreaves.

“The bottom line is ‘what is right for these animals?’”