With its first seafood festival, Tybee Island takes a cue from 'The Last Song' 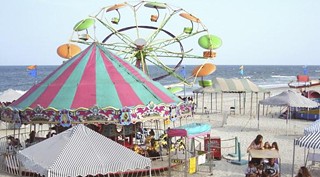 The Disney carnival. This is an off-hours shot - the cast, crew and local extras were elsewhere.

The photo used in the advertising for this week’s Tybee Seafood Festival shows a beautiful, sunny southern afternoon, with hundreds of happy folks strolling through a gigantic, neon carnival set up right on the beach, adjacent to the Tybee Pier.

There was a carnival there last June, erected by Walt Disney Pictures for The Last Song. It wasn’t really operational, though, and everyone in the ad photo is a hired extra.

That was enough for Richard Adams, Tybee’s unofficial event coordinator. The Last Song was the biggest thing to happen on the island in a while, and since people around the country are now flocking to see it (despite the scathing reviews), Adams figured Tybee ought to grab a little piece of the action.

“This was the only way we could do it,” says Adams, who pulls everything together for Tybee’s annual Pirate Fest and Mardi Gras celebrations, among others (he’s also the president of the Tybee Island Arts Association).

“If the film wasn’t opening, we wouldn’t have done it. That (photo) was the only way we could get the advertising out there quick. I just started putting this together seven weeks ago; it’s been a quick event to put together.”

“If we’d waited until next year to do the event, it wouldn’t have bridged up to the movie at all,” Adams explains. “It was important to bridge up to the movie, and I think the movie’s really going to help promote the festival.”

The carnival – the real one – will be set up on Tybrisa Street and in the rear parking lot of the Ocean Plaza Hotel, near the pavilion, starting at 3 p.m. Thursday, April 8. According to Adams, these will be the first midway rides to whirl and twirl on Tybee in more than eight years.

The rides will be on site and operational through 6 p.m. Sunday, April 11.

Saturday the 10th is the big namesake day. Adams says the idea of a seafood festival originated several years ago, with pavilion concessionaire Dean Morris.

At least 14 Tybee–area restaurants will have food booths in the pavilion, and the local band Sapphire Bullets of Pure Love, and others, will perform.

Chatham County donated the pavilion for the event; the City of Tybee Island kicked in a little seed money.

“We’re doing it on a hope and a prayer this first year, but by next year we should have it down pat,” Adams says.

Like many people active in Tybee community affairs, Adams is hoping The Last Song will have a significant impact on local tourism – even next summer, when it’s only another DVD on rental shelves.

“I’m happy that they came out here and filmed it,” he says. “I think it’s going to give us a little bit of activity this summer we wouldn’t have had any other way.

“Considering the times, I think we’re going to have an extremely good tourist season. There’s no doubt in my mind that it’s going to be better than it would have been without the film.

“No matter how the film does, as far as reviews, I think Tybee’s going to do well. We’re going to have people that see the film – no matter whether they like it or not, they’re going to want to come to Tybee.

“I mean, Tybee’s in the film! And it’s beautiful, so we look good.”

(See our Tybee-specific review of The Last Song in the film section.)