Catching shades of The Grey on MLK 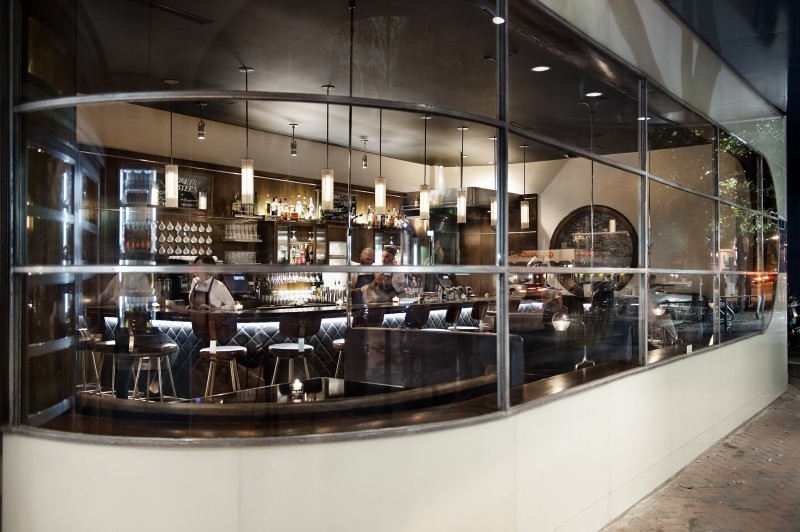 THE BLUE SATIN jumpsuit was definitely a no.

I was trying to put together a snazzy ensemble for dinner at Savannah’s sizzling new hotspot, and I thought I’d make a grand entrance with my recent amazing score from Gypsy Girl Vintage. But my man took one look and put down the kibosh.

After several more costume changes, I settled on an acceptably less-crazy dress and boots. It’s just that I was so damn excited about my first trip to The Grey and I needed my look on fleek, OK?

John O. Morisano, the owner of this new restaurant/bar in the stunningly refurbished Greyhound bus station on MLK Blvd., says he has been a tad overwhelmed at the explosive popularity of the place—the buzz has lit up foodie radars near and far, and expectations are high.

Though he professes that his nerves prickle every night before opening, Johno looked chill as a cucumber martini as he stood watch over the already-packed dining room, which yes, is as breathtaking as everyone says: The chrome shines, the liquor bottles glint under amber globe light fixtures, the servers saunter confidently among the tables as well-coiffed cogs in a sleek, thrumming machine.

You can run your hand along chipped railings down to the baggage claim-cum-private dining room, one of the many details salvaged from the original station.

What couldn’t be saved was revamped to the specific glamour of the Art Deco period, that historic architectural sweet spot when form followed function in the most glamorous possible way.

Johno kindly seated us at what he called “the Mack Daddy table,” a buttery leather booth presided over by a massive Marcus Kenney collage. Along with deep respect for preservation and heritage, Johno has also steeped the Grey in contemporary local art, adorning the walls with works by Betsy Cain, Adam Kuehl and Jerry Harris.

But dear Lord, let’s talk about the food already.

Recently pegged by Elle magazine as one of 30 culinary women to watch, Chef Mashama Bailey honed her skills at NYC’s award-winning Prune, a tiny joint in the East Village where you don’t care that the people in the next table are practically sitting in your lap because you can dip your bread in their parsley shallot butter when they’re not looking.

Bronx-born but partly Savannah-bred (she went to the same elementary school as my kids!), the Divine Chef M has no time for your gastronomic trepidations and is clearly succeeding in her diabolically delicious plan to get everyone here hooked on eel.

From the spicy eggplant appetizer to the lemon pop palate cleanser, every bite was a marvel. I ordered the whole baked snapper garnished with thin slices of orange that I ate down to the rind.

My jumpsuit-hating date practically cried tears of joy into his veal chop, seared crisp and pink as a camellia petal when sliced. And the beef liver polenta: I had to be physically restrained from licking the plate.

The craft cocktail menu dazzles; one day I will fill my bathtub with the tobacco-citrusy Radder & Lamb. As for dessert, let’s just say the cayenne-flecked peanut butter parfait puts Dairy Queen’s to shame.

After occupying our booth for three-and-a-half glorious hours, our impeccable server gently encouraged us to take the party to the bar up front, which is styled straight out of an Edward Hopper painting except the patrons were all laughing and toasting instead of looking like they wanted to go home and kill themselves.

On a stool sipping an old-fashioned sat none other than Tom Stephenson, former owner of Café Metropole, the beloved eatery that occupied this same space over a decade ago. Back then the aesthetic was a bit more, ah, bohemian since he and Clara Fishel had a landlord who allegedly gave no figs about historic preservation, let alone fixing the plumbing.

(It’s no secret that Johno—a successful venture capitalist who continues to run multiple businesses in addition the Grey—sunk a couple million bucks into the buy and build out.)

“I love this building so much,” said Tom, swirling ice cubes in his highball glass. “It’s so great to see it done right.”

The Grey is truly world class, which bodes well for the rest of the boulevard and Savannah. The revitalization of the rest of MLK has been a little like Bigfoot—excitedly discussed but non-existent until proven otherwise. But progress is emerging from the bush, and I’m not just talking about the four corporate hotels springing up towards the river. There are a slew of small businesses sprouting in the other direction, including a comic book shop and the Hops and Barley craft brew store, with more to come.

“As Broughton and the rest of downtown have improved, we’ve got more and more people who are interested in this corridor,” says Kevin Klinkenberg, executive director of the Savannah Development and Renewal Authority.

He reminds that the SCAD Museum of Art and anchors like Rancho Allegre and Creative Approach are thriving, proving MLK a sound investment. Further south, The Guild Hall has taken nerdcraft to the next dimension with its gaming compound and recent annexation of the old Bub-Ba-Q.

But how to bring the affluence all the way? Where the row bustled with minority-owned businesses 50 years ago, there is now a cavernously empty Food Lion and decaying public housing projects, the once-bustling neighborhood tyrannized by the ogre of the I-16 flyover.

Klinkenberg assures that the highway modification is slowly but surely making its way through the glacial federal contracting process, and when it is finally demolished, it will enable the city to reconnect the streets and gain back eight acres for more development.

Twenty blocks uptown, the SDRA is also helping things along with a makeover of Wells Park at 38th St. The City continues to offer a super sweet deferred property tax deal all the way down to 52nd St.

Can the prosperous, polished glow of places like the Grey reach that far? Will the aging used car lots and convenience stores give way to the next generation of business owners ready to take advantage of the opportunities? Can our MLK become a boulevard of restored dreams?

It remains to be seen, but I’ve got a hot satin outfit ready for the celebration.