Chaka Khan: 'Life is my inspiration'

The Queen of Funk takes the stage at Johnny Mercer Theatre

SHE'S "Every Woman," a Queen, and a living legend, an unparalleled vocalist, singer-songwriter, philanthropist, producer and actress. She’s sold over 70 million records, taken home 10 Grammy Awards, scored three gold singles, three gold albums, and one platinum album, and has been a Rock and Roll Hall of Fame nominee not once but twice. In her 40-year career, Chaka Khan has done it all—and the creative powerhouse shows no signs of stopping.

63-year-old Khan was born to sing and formed her very first group at the age of 11. After performing in several local groups in her hometown of Chicago, Khan teamed up with emerging funk band Rufus and revolutionized their sound with her one-of-a-kind voice. Through her defining, stunning belt, bright timbre, and sultry lower range, Khan caught the world’s attention through now-classic hits like “Sweet Thing,” “Once You Get Started,” and “Tell Me Something Good,” the breakthrough hit that rocketed Rufus to number-3 on the Billboard Hot 100 in 1974 and earned the band a Grammy. 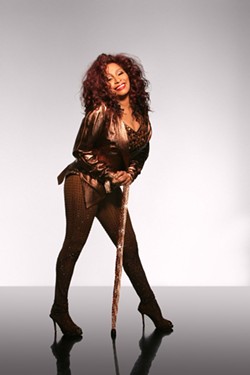 The legendary Chaka Khan comes to Savannah this weekend.

When Khan embarked on a solo career, she was immediately welcomed with a crossover disco hit, “I’m Every Woman.” She reunited with Rufus in 1979, producing the hit “Do You Love What You Feel,” and the band hit their final chart success with the Khan classic “Ain’t Nobody.”

As a solo artist, Khan has released such favorites as “I Feel For You,” originally written and recorded by friend Prince, “Through The Fire,” and many more. Her last studio album, Funk This, landed her a Grammy for Best R&B Album; she won additional award that year for “Disrespectful,” a collaboration with Mary J. Blige.

Forty years into her career, Khan shows no signs of stopping with a full tour schedule and many unique collaborations in the future. We chatted with the music icon in advance of her concert at Johnny Mercer Theatre.

When you step onstage, what happens for you as an individual? Do you feel a connection with your audience? Is it a solitary experience?

I like that connection with the audience, and I get it more often than not. It’s what happens between audience and performer, and that’s part of the magic of entertainment.

What’s the mark of a successful show for you?

When I don’t remember what I did.

You’ve achieved so much over the years. How do you continue to challenge yourself as an artist?

By the grace of God.

You’re a true Renaissance woman and have explored so many art forms. Is there a field you haven’t explored that you’d like to try?

Not that I can think of off top of my head. Maybe I could if I had a few days to think about it...maybe I could juggle while I sing.

You helped define a genre’s sound while exploring so many others. Did being named the “Queen of Funk” make you feel pressured to adhere to a certain sound?

No, I didn’t name myself “Queen of Funk.” I just am myself, and how they interpret that is okay with me as long as it’s positive.

I understand you’re working on a Joni Mitchell tribute. What inspired you to pay tribute to her work?

I’ve been a fan and a friend with her for eons—we’ve both admired each other’s work. I wanted to do my rendition of many of her songs as long as I’ve been an artist. For me, this is a very special endeavor and one of love and appreciation.

Are you working on any original music?

I’m writing stuff with other people, working on some collaborations—I’m doing some stuff with a group called Major Lazer, then a group of other people I’m meeting with today. It’s ongoing.

It’s my music and they remix it. It’s a pretty old concept; it’s the music, the music is great. It’s the chance to come up with a really good remix. We’ll just see what happens to that.

As far as my working with any other artists who are writing songs together, true good songs—which will hopefully not be remixed or will be remixed—what I’m doing, I’m trying to get with the best people I can, the people where we really share something and do the best music possible.

Lyrically, is there a message you’re drawn to while working on this new material? Where are you finding inspiration?

Life is my inspiration. All of it. So that’s the only answer I can give you right there. I’m not particularly trying to write about Trump or anything like that; I’m trying to get some beautiful songs out and songs that touch you in a way that you haven’t been touched yet or would like to be touched.

I hear you have the Big Soul Train Cruise coming up—that sounds like a blast. Is it fun to get back together with groups like Kool & The Gang from your early days?

I’m doing it as an honor to Don Cornelius. We started out around the same time. There’s a time when I was the only artist on Soul Train for a minute; I'm doing it in honor of him.

What can fans look forward to hearing at the show?

A damn good one. I pray that each person will go home with a song that they wanted to hear, know what I'm saying? I have a 40-year career—there's no way I can please everyone all the time. I am prayerful and hopeful that everyone will go home happy.

How would you describe the Chaka Khan live experience to folks who haven't seen it?

Any secret to how you've taken care of your voice and kept your range for all of these years?