Loaves of love for the Jewish Food Festival 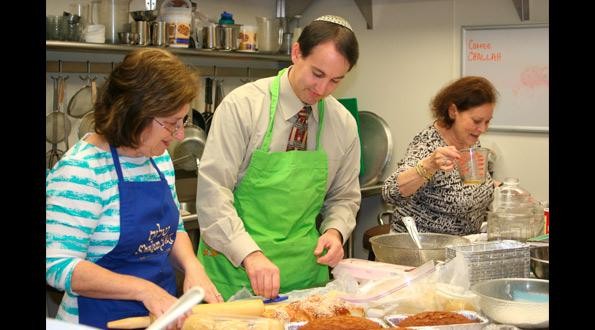 Forget what you’ve heard about too many cooks in the kitchen.

At Congregation Mickve Israel, a group of women are performing a graceful ballet amongst the double ovens and racks of pots, some of them whisking eggs in huge bowls, others kneading dough at the metal work table, sending up puffs of flour like a gentle storm.

Still others twist and braid four or even a mind–boggling six ropes of dough into pillowy loaves of challah, the traditional Jewish egg bread baked to a crusty golden brown. Occasionally, enticed by the delicious aromas wafting their way out of the social hall into the lobby, a man wanders in and is immediately put to work cutting cookies.

“Just call us the mavens,” jokes native Savannahian Joan Levy as she measures teaspoons of yeast, invoking the Yiddish term for “trusted expert.”

Indeed, the epic feast that is the Shalom Y’all Jewish Food Festival simply wouldn’t be possible without the skilled hands of these bustling balabustas, another Yiddish term for “women who get stuff done.”

And, ov vey, is there a lot to do: In addition to the 165 loaves of challah being prepared and braided, Levy and this tribe of volunteers will also bake up 60 honeycakes, 1700 blintzes, 70 apple strudels, 450 stuffed cabbage leaves and thousands of cookies to sell at Sunday’s festival. No wonder there’s a giant bottle of Manischewitz sitting on the counter.

“No, no, that’s to soak the raisins for the noodle kugel,” explains Sue Ruby, ladling honey out of a massive vat donated by the Savannah Bee Company. “The wine gives them a special sweetness.”

Ruby and Levy have overseen the baking for this annual culinary extravaganza for 24 years, an event that has the entire city lining up for latkes and matzoh ball soup after church. It’s also as unique as Savannah’s Jewish community itself: A combination of Old World ways, rich Southern traditions and a bissel of surprise here and there. (What other Jewish food festival offers the tasty Asian noodle dish Shalomein, available at a booth sponsored by the Southside Mahjongg Group?)

“We’ve really got everything, from all walks of Jewish life,” says festival chair Lauri Taylor, who in spite of procuring a host of sponsorships—including a freezer from Livingood’s to store the bounty—has still managed to find time to don an apron and wield a rolling pin.

“We’ve got brisket, corned beef and the baked goods which come from the Eastern European tradition, then we’ve got Israeli salad, hummus and sizzling Sephardic lamb, which are Middle Eastern.”

Transcending the many contingencies of Jewish geography are kegs of He’brew beer, returning this year along with egg creams, corned beef sandwiches and homemade dog biscuits. Also back by popular demand is entertainment by members of the Savannah Philharmonic and Israeli dancing with Maxine Patterson’s School of Dance. The festival is once again raising funds for Second Harvest Food Bank: Those who make donations at the booth will receive a free Coke, courtesy of the local bottling crew.

Back in the kitchen, as the balabustas continue their baking marathon and the smells of cinnamon and warm bread fill the air, the talk inevitably turns to the recipes themselves. Handed down from generations of Jewish women from all over the world, some are from as far away as the long–gone shtetls of the Pale between Poland and Russia, some were developed right here in the South, like the wine–infused kugel inspired by The Matzoh Ball Gumbo Cookbook by Marcie Cohen Ferris.

Some of the women crowding the kitchen counter have lived in Savannah all their lives like Levy, while other have found their way to the third oldest Jewish congregation in America through marriage, job opportunities and quirks of fate. The Shalom Y’all Jewish Food Festival and the recipes themselves give them all common ground and the opportunity to bake bread — and break bread — together.

“All of these Jewish women come from everywhere and we’re still all cooking the same things,” Kerry Rosen, a recent transplant from South Florida who grew up in Chicago. “Our culture is built around food.”