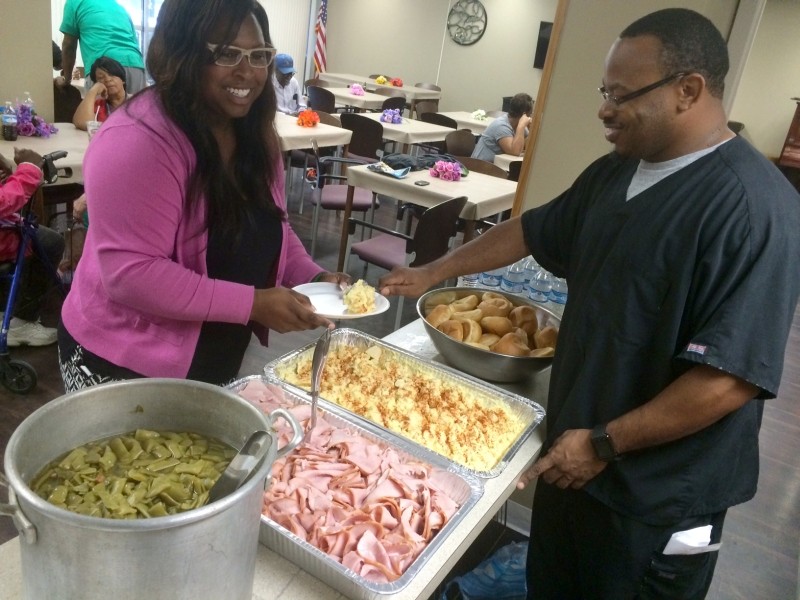 Leggett, right, serves meals at a campaign lunch at the Rose of Sharon Apartments.

HE'S ONLY 42, but Detric Leggett has two decades of experience as a surgery tech in local hospitals. He’s personally seen the effects of Savannah’s gun violence as its victims have come into the ER for trauma treatment.

The native Savannahian and Savannah High alumnus is active in his church, Holy Spirit Lutheran. He takes on longtime incumbent Mary Osborne to represent one of Savannah’s most rapidly changing districts, with a focus on the beleaguered, long-neglected Waters Avenue Corridor.

You’ve said you were offered money to stay out.

They asked my pastor to get me to leave the race, for money. I thought that was disrespectful to the sanctity of the church, for one thing.

Jesus drove the moneychangers out of the temple.

They came back with a vengeance! (laughs) I've been asked to leave. Alicia Blakely's been asked. I'm not sure about Shaundra McKeithen. Joe Steffen, he's been asked. For me, they called Lester Jackson, and they had that conversation, and Lester Jackson pitched everything, they would take care of all my expenses.

How do you decide to take on such a well-entrenched incumbent as Mary Osborne? I get the impression she thinks that seat belongs to her until she retires.

She doesn't think--she says she knows. For me it was about going to neighborhood association meetings, and talking with the neighbors, and just being an activist. Sooner or later you just have to say enough is enough.

Today’s politics and living in this neighborhood is like old underwear. You keep ‘em on the whole week and never change ‘em. Sooner or later it’s gonna start getting stinky and start itching. You need to change that underwear.

Do you agree there is less margin for error in underserved communities? There are plenty of incompetent and corrupt white leaders, but the difference is that white people in Savannah are generally going to do OK regardless.

That’s until now! That's until now. See, the electorate is alive right now. We have a lot of young people, a lot of people with a lot to say and we’re not afraid of the incumbents.

We’re going to be an upstanding campaign and be totally straightforward. I called Mary Osborne when she was sick in the hospital and said Mary, first of all I want to see how you’re doing, I just want to check on your health. “If you were smart, boy” – she said that – “if you were smart, boy, you’d wait four years and I’ll walk you into City Hall.”

I said, you don’t have that kind of power.

This district has a lot of new people coming in. We’re the type of district that has always been innovative, we’re at the top of clubs, the top of business, the top of sports. We have the best of everything in Savannah within these confines.

Well, why don’t you?

Because that puts the interest on Waters Avenue: Let’s clean it up. That’s sweeping in front of your own front door.

Blight is a city-wide issue. It’s not your district, but Edgemere-Sackville, a few blocks from where I live, is dominated by just a handful of what I guess you have to call slumlords.

If you go from Cedar to Live Oak, that's going from The White House to Cambodia. It's a big, big difference. And the sad part about it is the police department and everybody in Savannah knows if you really want to get robbed, drive down 54th Street.

Shotspotter will tell you the majority of shots come from over there. Over the past year the majority of people who went to jail for shooting each other are from there. The past couple of young men I helped work on in the hospital, they got shot over there. The same group of people. There are pockets of crime that go on around Savannah.

What’s the cause? Racism, poverty, everything?

Placeism. It's not even racism anymore. They use racism as a tool to just throw it out there.

That’s how I view City Council. They’re in their place, and their version of Placeism -- they’re going to stay there and not go anyplace else. They’re going to do whatever they’ve got to do to stay in that place. We want to open up the door for everyone else to move through.

You’re huddling all these people in one place. Let people go anywhere they want to and use their Section 8 vouchers. Right now they can’t.

That breaks the barrier. You’d have people living in a different neighborhood, it gives them a different opportunity. Minds can change.

What do you do about the police force and crime?

We have to support the police. We don't have enough police to do all the things we need to do. I look at Chief Lumpkin like the big dog in the yard. How can your dog protect the yard if you keep him tied to the tree?

He can do more if they take the chain off him, which means the City Manager and the Aldermen and the Mayor have to do that.

So many District 2 residents have service industry jobs. What’s your take on tourism and the living wage issue?

Downtown residents are mostly looking for some privacy. Some things need to be regulated. I don’t see a problem with tourism at all, you just have to come to the table and have a conversation with the residents along with the tourism bureau about how we can have a higher quality of tourism.

We have so many hotels going up right now, and the service people that work in those hotels we need to bring them up to a standard $15 an hour. That could change the whole complex of poverty here.

You are passionate about the Waters Avenue Corridor. The precinct debacle at the corner of Waters and 37th is in your district. What do you think of that mess?

I'll tell you what I think: A lie doesn't care who tells it. It just needs to be told.

When we were first brought up to speed on the police precinct, we asked what it would entail. Turns out when they brought the consultants in, the ground wasn’t viable for that kind of thing. That was $750,000 just for somebody to tell us we can’t do it.

Then they said we’ll put the precinct there and put Property Maintenance on the top. So then you’d have all their vehicles and equipment there, that would be more blight.

Then they said we’ll bring another consultant in. That’s another $750,000 for somebody to come in Mary Osborne’s district, where she never sat in on any of the meetings, to tell us, well that’s not going to work either.

So now we are where we are right now, which is nothing. Where is all this money coming from and where is it going?

Perfect example: Look at the corner of Waters and 31st. It’s owned by Urban Christian Church. It’s been in that condition for the past 22 years. Drive by and take a picture of it. If it’s raining you’ll probably see a wave of water inside the building.

But the City knows, and everybody else knows, that property is owned by the church. It’s so dilapidated it’s falling apart. But in another part of town the City will write you a ticket if you paint something the wrong color.

Mary Osborne was asked about it, didn’t do anything about it.

Another example: June 1 was supposed to be the beginning of the streetscape starting at Wheaton to Victory. We have yet to see that. Stephanie Cutter did stand up and say right now we can’t get the numbers right.

City Council has hire and fire authority over the City Manager. So... what do you think of the job Cutter’s doing?

That's a hard question. Everybody downtown needs to be held accountable for what they've done in the past and up to the present. And that means using their discretion and their authority and their powers and how they've used them.

We need to audit their jobs. At the end of the day if we need somebody else in there, let’s do it and get Savannah back on track.

If we’re going to have big ships coming in here, a lot of jobs at the Port, a lot of hotels going up and a lot of the district’s people working downtown, we need to have a partnership with downtown, midtown, and that’s why we talk about connectedness. We need to connect all these people together so we have a good working relationship, and can keep our people safe.

And when I say “our people,” I don’t just mean black people. We need to think about the entire City of Savannah at this point. Because everybody’s going to feel the crunch if we don’t get crime under control and if we don’t get leadership together.

I’ve heard it said so much of our problem is simply that this City Council has terrible chemistry together.

It’s true. Too many egos! That’s my opening statement on my brochure. Sad part about it is, instead of watching Real Housewives of Atlanta you could watch a City Council meeting and have a better laugh. And that’s sad.