A LONGTIME denizen of the Windsor Forest neighborhood, Stephen McElveen has worked in the tourism and home security industries as well as owned the Paint Store in Richmond Hill from 1995 to 2007. He's also a grandfather and an ordained deacon at his church. This is his first time entering the political arena.

You're a working man with a family. What made you decide to run for office?

When someone approached me about running for this position, it had never occurred to me to go into politics or anything of that sort. But the more I thought about it and the more I talked to my family about it, I wouldn't have it any other way. I feel that it's time for the incumbent to go. Someone's got to do something.

I am a Savannah native, which for me should be one of the primary qualifications for running. I spent a little time out of state, but I’ve basically spent my entire life as a Savannah resident. I moved to the 6th district in the early 80s, I raised my family here. My kids went to Windsor Forest Elementary and Windsor Forest High School. So I’ve seen things develop over the years.

I’m a concerned citizen, I know the way it’s supposed to be, let me do it. I had a business in Richmond Hill for 15 years that I sold, so I have business experience.

I’m currently doing sales consulting for SafeTouch Security, and working in the security industry puts me at an advantage. Out of all the people who are running, to the best of my knowledge, I’m the only one who has sat at the kitchen table with Mom and Dad who have been broken into and the kids can’t sleep and Mom is terrified. I’ve seen it happen, I’ve seen it in their eyes, I know the feelings of what they’ve been through.

What policies or programs would you implement to address crime in the 6th district?

We have a lot of home-based crime here; things taken from cars in the driveways and such. People are concerned about who’s knocking on their door at 10 o’clock at night. We had an incident happen within a quarter of mile from where I’m standing in front of my house a couple of nights ago—someone knocked on a neighbor’s door and when she opened it, the person forced his way in, knocked her down and took her stuff. That’s what people are concerned about here.

I would be representing the 6th district; however, it’s a vote for the entire city. There are some things that can be done in my opinion that are not currently being done.

When I was raising my children, I told them if they did something wrong and I punished them for it and they did it again, I’d increase the punishment. It should be the same with a repeat offender. We’ve got to make it so that the punishment deters the crime.

People also need to know that calling the police and reporting a suspicious person is not a crime. The police want that so they can keep track of what’s going on.

Any other concerns you’d tackle if elected?

The overall monitoring of financial dealings of the city. I’m not sure there are eyes on the expenditures that there should be. I keeping reading about this study and that study, we spent four hundred thousand dollars here, six hundred dollars there. If those are being vetted the way they’re supposed to, I’m not convinced.

Being new to politics, I don’t have any right now. My primary concern is getting elected and seeing that the police department is brought up to speed. That is the situation that never should have been allowed to happen. They’ve taken some steps to address it with the pay raises but there’s going to be a lot more work that’s going to have to be put into that.

My vision is for Metro to become the best police department in the country. I want officers from all over the country coming here to train. We should be a shining example, especially facing the things we’re facing. We have to have the people to support the police department and back them up and let the officers do their jobs without fear of reprisal.

What are your ideas for economic development?

Anything you can do to make Savannah more business-friendly: Tax incentives, anything to attract new business. That is not only going to help economics, it’s also going to reduce the crime rate. It’ll help things all around, increase the tax base.There’s almost no way to lose.

I would like to see more clean industry, IT companies, that kind of thing, as opposed to another paper mill. I don’t have anything against the paper mill, it’s historically done very well; it built the city into what we have today.

I believe that Savannah is one of the most beautiful places on the face of the earth. The historic district, springtime and the azaleas, Forsyth Park, is just so attractive. I would like to see tourism continue to grow and expand.

Tourism is a good, clean industry for us. It adds to the revenue of the city, it provides jobs. It’s an almost no-lose situation.

Would you support a restriction on the number of hotels in the historic district?

I can without equivocation say that I would be for restricting certain types of buildings down there. Not having been privy to council and the powers that be and the Historic Savannah Foundation, I don’t know the details of what happened before.

But this is one of the things that would be important to me. Putting up a new four-story hotel right on the edge of the historic district? It’s got to be handled on a case-by-case basis.

I don’t believe in zero-tolerance thinking, but I would be conservative with what is allowed down there.

What would you do differently than the incumbent?

I will not have had the opportunity to be complacent. I will represent the people of the 6th district with integrity and more of an idea of representation than personal enrichment. You can read between the lines there.

I’m more representative of the people who live in the 6th district. I’ve owned my house for 30 years. I’ve been married for 37 years.

I have two children that went to local schools. That gives me a perspective that the other candidates don’t have.

Law and order are my priority. People don’t need to be afraid to walk the streets, in the 6th district or anywhere in Savannah.

And I want to make sure Savannah is represented well on the world stage. 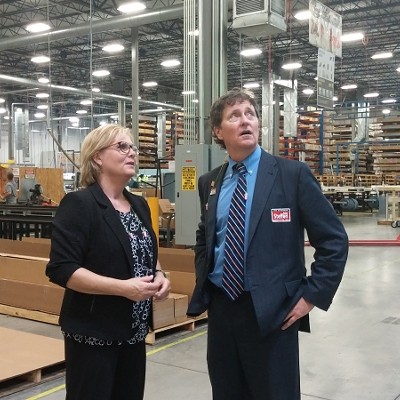