Reserve your seat at : https://tybeeposttheater.showare.com/

THIS weekend, Tybee Post Theater hosts a free screening of one of the most gorgeous films you’ll ever see — most of it filmed underwater.

Due to the rising temperature of the oceans, water chemistry changes and the world’s coral reefs are literally bleached white — weakening them and dramatically affecting the entire ocean ecosystem. 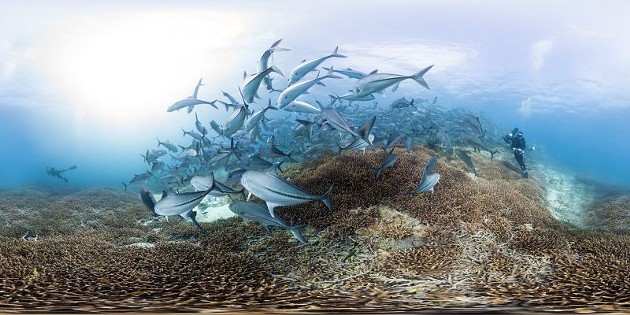 Director Jeff Orlowsky’s previous film Chasing Ice (2012), also dealt with climate change – except in the much different shooting environment of the shrinking glacier fields in Greenland, Iceland, and Alaska.

Donations are accepted at this screening, to benefit the Grays Reef Marine Sanctuary Foundation.

We talked to Orlowsky about the new film, and about coral bleaching itself.

Chasing Coral is a natural sequel to Chasing Ice, as both deal with climate change. Was that part of the plan?

Orlowsky: The idea for Chasing Coral came after the first film was done. We were working with connected communities, and hearing stories about how these issues work together.

I was blown away to learn that a quarter of all marine species spend time on a coral reef at some point.

I knew nothing about that at the time. It's fascinating. I saw it as a sign of yet another ecosystem changing rapidly. So we went about this film with a similar way of thinking. These reefs are going through massive changes.

There are lots of problems, but the coral bleaching is directly linked to temperature rise. That’s the scary part. But coral can recover, based on all factors being alleviated and working in its favor.

Many directors of ocean documentaries already have extensive experience in underwater cinematography. But you and your crew really didn’t before this film.

I do now! (laughs) I had gotten a scuba license and was comfortable enough in the water that I saw that as a way to be able to get more into the idea of underwater filming. It was a very steep learning curve, because the team was not all experienced in this type of cinematography. But in retrospect we all ended up embracing it. I look back at some of the early footage and it looks pretty bad! (laughs)

Yet this is really a beautiful film. You let the visuals tell the story, instead of hitting the audience over the head with information.

We honestly wanted to literally give as little info as necessary, just enough for people to get a sense of the real impact. We go on adventures, and there is a natural storytelling instinct that kicks in. We wanted to make a film first, and first and foremost tell a human story. Then of course we wanted to really show the shock and awe of what’s happening to that ecosystem.

You show time-lapse images of how quickly the coral bleaches, sometimes over the course of mere days.

That was one of the biggest learning curves. We were all surprised at how quickly the reefs change. We were watching it happen literally every day.