Since Jan. 1, 94 Chatham County residents were reported to have died of COVID-19 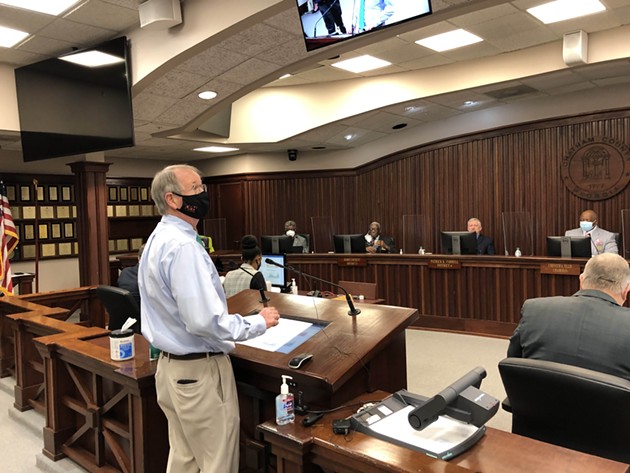 Nick Robertson/Connect Savannah
Dr. Lawton Davis, Coastal Health District health director, addresses the Chatham County Commission on Feb. 12.
Coronavirus infection rates appear to be dropping across Chatham County following an extended spike in cases from mid-December to late January, and while COVID-19 inoculation efforts are expanding locally, vaccine supplies remain limited throughout Georgia, according to the region’s top public-health official. During a coronavirus-response update presented to the Chatham County Commission on Feb. 12, Coastal Health District Health Director Dr. Lawton Davis reported that the county’s average number of confirmed new daily cases had dropped to 30.7 per 100,000 residents, after reaching 45.7 per 100,000 residents in early January – the second-highest total since the pandemic began – following holiday-season gatherings that were believed to increase the spread of COVID-19. “We’re still on the high side, but we’re coming down, and that’s good,” Davis said of Chatham’s infection rates. Davis said that the county’s public COVID-19 vaccination efforts are proceeding smoothly following the rollout of the chdcovidvax.org portal for scheduling inoculations, estimating that the CHD is handling up to 1,200 appointment slots daily. Davis noted that nurses from the Savannah-Chatham County Public School System have been assisting in administering vaccine shots.

As of Monday, Feb. 15, 324 Chatham County residents were reported to have died from COVID-19, according to CHD statistics, with 94 of those deaths reported since Jan. 1.

Additionally, the CHD has opened a new temporary vaccine-administration clinic at the EmployAbility facility at 1249 Eisenhower Dr., Davis said, while pop-up inoculation clinics are being organized at varied Chatham County churches on Wednesdays from mid-February through early April. Nonetheless, these efforts are all hindered by insufficient vaccine supplies across Georgia. “The state is not getting enough to spread it around,” Davis said, while noting that more vaccine supplies are expected in coming months. “Hopefully by summertime we’ll be rolling in vaccine, floating in vaccine.” Currently Georgia remains in Phase 1A+ of the COVID-19 vaccine rollout, meaning that any residents aged 65 or older are eligible for the lifesaving shots, as well as their caregivers, healthcare workers, and first responders. While Davis expressed optimism about the progress of vaccination efforts, he warned that more contagious coronavirus variants are likely already spreading in the Savannah region. “I think we would be foolish to assume it’s not here,” Davis said of new COVID-19 strains discovered in South Carolina and Florida. Davis reiterated that wearing a face mask can help prevent the spread of any COVID-19 variant, and said that while the Centers for Disease Control and Prevention officials are now advising people to wear two masks, “I’m still happy if I can get somebody to wear one mask.” As of Monday, Feb. 15, 324 Chatham County residents were reported to have died from COVID-19, according to CHD statistics, with 94 of those deaths reported since Jan. 1.