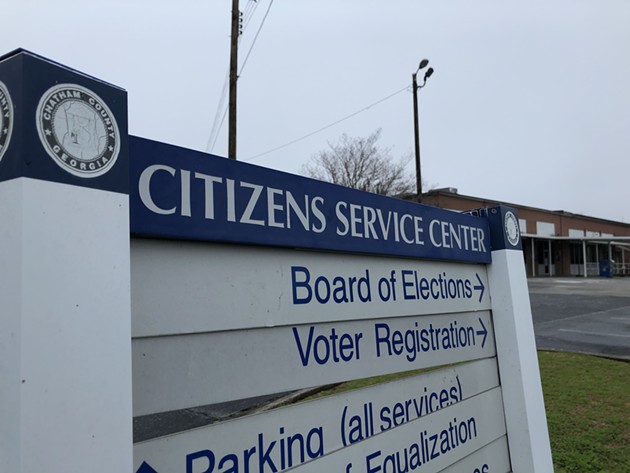 Nick Robertson/Connect Savannah
Signs point toward a merger between Chatham County's Board of Elections and Board of Registrars.
One could presume that activity would’ve died down for the Chatham County Board of Elections in the weeks following Georgia’s Jan. 5 U.S. Senate runoff race, coming on the heels of a turbulent 2020 balloting cycle. Such a presumption would be wrong. Since Jan. 5, the elections board has seen two members resign from the same seat, while the county’s longtime elections supervisor, Russell Bridges, retired before being rehired as a consultant. Now leaders from Chatham’s Democratic and Republican parties are pushing for the Board of Elections to be merged with the Board of Registrars, citing perceived problems with the county’s divided departments that oversee different aspects of every election. Chatham County’s General Assembly delegation of state-level elected representatives is currently discussing the logistics of merging these two boards, according to Georgia House Rep. Ron Stephens of District 164, who chairs the Chatham delegation. “We’re in the process now of trying to decide how it’s going to look,” Stephens said of the possible merger, adding that he’s seeking input from board members before the eight-member General Assembly delegation moves forward with the merger. “It’s our decision. We have to be careful, because we’ve got to live with that.” And while talk of merging the two boards has circulated for years – Chatham being one of very few Georgia counties with separate departments for registrars and elections – the movement now has considerable momentum and bipartisan support, according to Stephens. “If I had to guess, either next week or the week after, we’re going to have the final version” of what structure a merged Chatham County Board of Registrars and Elections would have, Stephens said. “We can really do anything we decide.” However, the chairs of both boards are united in warning that a merger may not address complaints about Chatham County’s voting systems. “It’s not necessary for us to merge,” said Board of Elections Chairman Tom Mahoney, asserting that Chatham’s divided system provides a mechanism for checks and balances. “There’s a thought that it would be streamlined if there was only one board. I really don’t think so.” Board of Registrars Chairman Colin McRae agrees with Mahoney that the split boards keep each other in check, but he is more concerned about how a merger could impact staffing for both departments. “We want to make sure that our very well-trained and tenured staff is looked after,” McRae said, adding that misconceptions about the roles of Chatham’s registrars and elections departments have led to many of the complaints against them. “Those shortcomings that people have identified, or think they have perceived, are not shortcomings at all.” Responsibilities of the boards Broadly speaking, Chatham’s Board of Registrars oversees registering voters and maintaining the voter rolls, organizing early voting, and mailing out absentee ballots, collecting them, and verifying voters’ signatures on them – one of the more controversial voting functions during the 2020 elections, when the pandemic led to a sharp rise in absentee balloting across the county and state. Meanwhile, Chatham’s Board of Elections oversees county-level candidate-qualifying procedures and campaign-finance paperwork, as well as managing voting-day operations at precinct balloting sites and tabulating all votes collected before certifying the winners of local races. “I’m aware there is confusion in the public about the responsibilities of the two boards,” Mahoney said. “Voters contact us a lot about things that are the Board of Registrars’ responsibility.” But perhaps the most significant difference between the two boards is how they are composed. Four of the five Board of Elections members are elected positions – two Democrats and two Republicans, chosen every four years during their parties’ midterm-election primaries – and the winning board members select their chair. On the other hand, Chatham County’s Superior Court Senior Judge appoints the five-member Board of Registrars from a list of names submitted by the Grand Jury for four-year terms, which McRae believes results in a nonpartisan board makeup that reflects the county’s demographics. “A board in which you don’t know how they lean politically is one that engenders more trust,” McRae said, adding that anyone seeking to combine the two boards would have to very carefully consider whether its members should be elected or appointed. “The big question is, how do the individual board members get selected?”

“Feelings are intense on both sides of the aisle. We need to be there for the voters. ... If you’re going to change something, you sure want to make it better.”