I’D LIKE you to imagine the voice of John Kennedy. And complete this sentence.

“I believe that this nation should commit itself to achieving the goal, before this decade is out, of...”

Is it “landing a man on the moon and returning him safely to the earth?”

Or is it “allowing food trucks in Savannah and enjoying tasty street food?”

If you chose the latter, congratulations! You just passed the “Are we there yet?” test often administered in our fair outpost of civilization.

But, believe it or not, for as long as we’ve been waiting for City Hall to belch out a food truck ordinance, several food truck vendors already have been roaming the roads here.

In years to come, these cooks-on-wheels will appear as brave as Space Age test pilots. Apologies to test pilots, of course. Chaz Ortiz didn’t have to spin around in a centrifuge.

“When we had family events, we all had to cook,” the Puerto Rican chef says of his youthful start around stoves and knives. “I took their recipes and I put a spin on it.”

You might have seen Ortiz as the cook inside Chazito’s Latin Cuisine food truck. The Pennsylvania native came here about ten years ago by way of a large island-based family.

He and his father sawed and welded his empanada Enterprise out of an old Lay’s potato chip truck. He launched it after six months of banging the truck and banging on doors.

“We made a lot of mistakes,” he says. “But little by little, it all came together.” 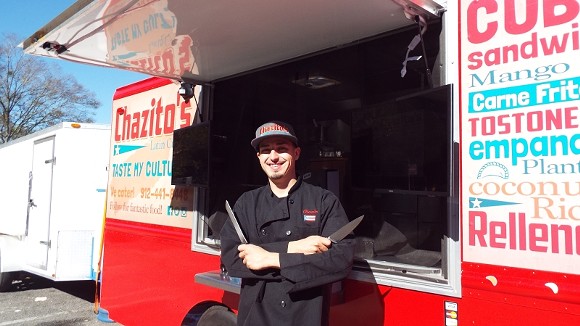 All of this coming together took place last year in his driveway in Pooler. He worked mornings on the truck. He still works afternoons at Gulfstream shipping and receiving.

“It was pretty rough looking,” Ortiz says. “But it was my little beauty.”

I stepped inside his tiny mobile kitchen more recently when he was dishing up delights at a Unity in the Community event on River Street. It’s certainly not rough anymore.

I suggest “Plantain Me Crazy” if he has it on his ever-changing menu. It’s fried plantains topped with shredded stewed chicken, romaine lettuce, tomato salsa and Mexican cheese.

How was he doing this on River Street?

“Any event, you can get a permit for the day,” he says of current regulations. “Also, food trucks are allowed on private property, over an acre of land, like car dealerships.”

So he can mojo his mojo at Hunter. He spiced up the Doggie Carnival and Isle of Hope Music Festival, where he sold out not once, but twice, restocking at Sam’s in between.

“That was our busiest yet,” he says. “It was an awesome day.”

Hopefully, this will be the year when Chazito’s Latin Cuisine—and more than a dozen other food trucks—don’t have to have a special event to roll out.

Hopefully, “awesome days” will happen on a random Tuesday, for chef and diner alike. Ortiz deserves it, not just for his food, but also for his “moonshot” spirit.

“I just started watching these shows,” he says of Great Food Truck Race and the like. “Sitting here with my wife a couple of years ago, I’m like, ‘I can do that.’”

And he did, full stop, Tranquility Base. 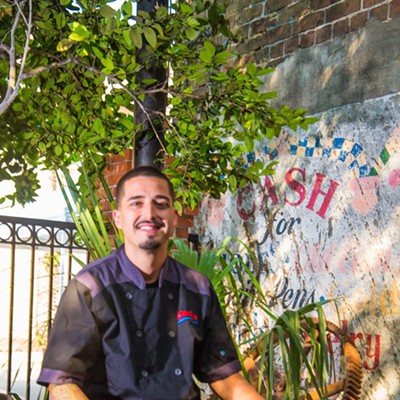