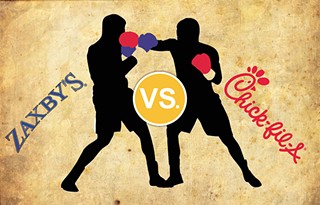 We here at Connect aim to keep it fresh and local in all things, especially food.

But two different fast food chicken chains recently opened up around the corner from our offices and just like that, it was ON.

Given last year's uproar over Chick-fil-A CEO Dan Cathy's stance on gay marriage and the fact that both Chick-fil-A and Zaxby's have roots in Georgia (Atlanta and Statesboro, respectively), we figured it was a worthy debate to bring to the page.

I would like to preface this by saying that eating any kind of fast food is a rare exception to the healthy habit rule strictly enforced in my family, a rule that mostly disintegrates when: A) we are on a road trip and suddenly no one likes the hummus and homemade pickles on pita I packed, B) It is 3 p.m. on deadline day and I have not eaten anything but an Altoid and three pistachios I found in the corner of my desk drawer, or C) I have raging PMS.

When I fall, I usually land at Zaxby's, because I find fast food hamburgers to be so — how do I say this — barferiffic. This is how I have come to be, so help me, torridly in love with Zaxby's Buffalo Bleu Cheese Zalad.

Dan Cathy would never approve of my extramarital affair with this wide dish of crispy romaine, red cabbage and shredded carrots, topped with blue cheese crumbles and succulent cubed chicken soused in a sauce so tasty I have been known to nibble my napkin after I wipe my mouth.

My indulgence is served with two triangles of buttery thick Texas toast, though I usually skip these carbs in favor of one of Zaxby's limited edition creamed confections: On the menu this month is a Banana Pudding milkshake that cools the bite of the buffalo sauce and is best sipped slowly as it may induce a brain freeze bliss coma.

A fave amongst other family members is the Zaxby's Club Sandwich, served on the aforementioned delectable toast and accompanied by old school crinkle fries. Side options also include onion rings, always a coveted item, and spicy fried mushrooms, which can make a palate happy even when the body that the palate belongs to has been subjected to 450 miles of Interstate in one day. The kids' meals come with apple juice or chocolate milk with no high fructose corn syrup or artificial growth hormones, so that's one less thing to feel guilty about.

Speaking of which, a rigorous scouring of the internet has not revealed even a whiff of political posturing from Zaxby's. Though the company has employed comedienne and loud-and-proud "lover of the gays" Kathy Griffin as a spokesperson, its stance on same-sex marriage, the NRA, dolphin-assisted homebirths or any other controversy remains unknown.

Unlike Chick-fil-A, which in spite of reports that it has changed its policy to no longer to donate to organizations "that promote discrimination, specifically against LGBT civil rights" and had already scaled back their giving to such groups starting in 2010, actually increased its funding in 2011 to notably anti-gay groups like the Marriage & Family Foundation and the Fellowship of Christian Athletes. According to ThinkProgress.org, Chick-fil-A's charitable giving is "no less hateful, just less transparent."

While Chick-fil-A has changed its corporate messaging to include bland anti-discriminatory language, it is clear that the opposition to gay marriage remains within its corporate culture. Just because people can't be fired for being gay doesn't mean they're welcome, Jim!

Perhaps no one in the company will again make the mistake of announcing their opposition to gay marriage — and the civil rights that come with it as it made legal state-by-state (bet ya a Zaxby's Zalad that Georgia is one of the last holdouts!) Still, just a few weeks ago, a newspaper ad in Dayton, OH offered $25 Chick-fil-A gift cards to every married, heterosexual couple that attended a May 19 event at the Cornerstone Baptist Temple honoring "biblical marriage."

We are indeed a free society, and nowhere is the power of our freedom more effective than where we choose to put our dollars. You may like the way something tastes, but there are longterm effects. And I'm not talking about the need for a TUMS.

But no need for politics to muss the shiny formica table here. Zaxby's is the obvious intelligent choice, utilizing as it does the clever literary device of replacing 's's with 'z's on the menu rather than stoop to the level of illiterate bovines.

And there's no doubt that Zaxby's has superior flavor, especially with a dollop of their Nuclear Sauce.

But here's the thing, my dear colleague, something I've learned the hard way: The perfect is the enemy of the good.

Stand strong by your principles by all means. Don't patronize Chick-Fil-A if you feel it's necessary to boycott their owner's opposition to gay marriage.

But realize I have a different worldview. I seek change from within. Ninja style.

If you can't beat 'em, join 'em. Then change their minds once inside the door. Like a Jedi Knight.

And once inside that door I'm pretty much gonna crush one of those delicious pressure-cooked chicken patties with waffle fries and an ice-cold Coke.

What other quasi-fast food joint has such a dedicated cadre of employees, always crisp and professional, always well-scrubbed, always eager to serve those perfect, signature chicken patties with a smile? I mean — isn't that a testament to something good?

Jessica, meet me at camera three.... Just between you and me, you know damn well some of those well-scrubbed high-schoolers behind the counter at our friendly neighborhood Chick-Fil-A are gayer than all get out.

Who are we to deny our gay and lesbian brothers and sisters their chance at a good job with the employer of their choosing? Hmmmmmm?

Where is this? RUSSIA? And by "Russia" I mean the FORMER SOVIET UNION!

And who cannot admire Chick-Fil-A for closing on Sundays out of respect for the faith of (most) of their customers and workers?

Granted, Sunday is not everyone's Sabbath. And granted, Judaism, not the Christianity of Chick-Fil-A's owners, seems correct on this issue. Simple math tells us if God created the world in six days and rested on the seventh, then Saturday is the only Sabbath that makes sense, not Sunday.

Isn't it a symbol of basic integrity that by closing on Sunday, Chick-Fil-A deliberately trades profit for principle?

I mean — have you been to a Chick-Fil-A lately? They're packed! It's a license to print money.

Each Chick-Fil-A is like a little Federal Reserve Bank.

Do you have any idea of the crap ton of money Chick-Fil-A forfeits, purposely, by closing one day a week nationwide?

Be that as it may.

For me, gay marriage isn't just a matter of social equality. It's a simple follow-through on the basic premises of liberty our country was founded upon.

Life, Liberty, and the Pursuit of Happiness. All men (women) are created equal.

No one can freakin' deny my right to pursue a boatload of lightly-breaded happiness in eating a wonderful Chick-Fil-A sandwich.

Any time I want. Except on Sunday.

Liberty. Love it or leave it!

The other key precept at play here is the central teaching of all major religions: Do unto others as you would have them do unto you.

So do unto me as I would do unto you, Jessica. I'll let you eat your Zaxby's all day.

But you will pry my Chick-Fil-A Original Chicken Sandwich out of my hand when you pry my cold dead fingers from around it. 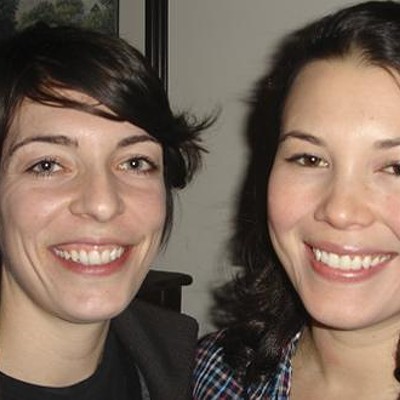