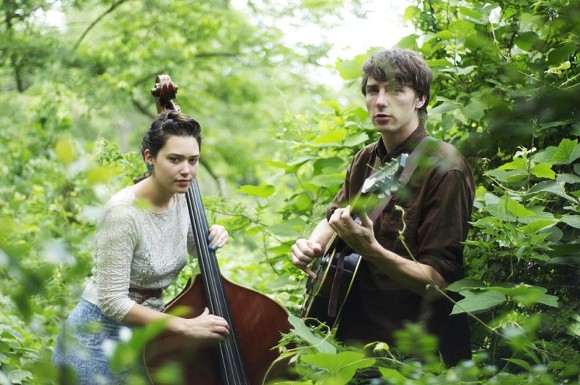 WE ALL know that familiar sound.

Yankees move to town and think there’s a low siren swelling in the distance, some squeal of distress as dusk falls. But here in the South, we all know the song of summertime: the chorus of cicadas, trilling in unison to greet the growing dark.

With a woozy sweetness to their sound that’s as comforting as curling up for a nap in a cool, hidden-away patch of green grass, Athenian duo Cicada Rhythm are the perfect band to jump start summer. They make their Savannah debut on June 12.

The collaboration of native Georgians Andrea DeMarcus (hailing from the little town of Tucker, outside Atlanta) and Dave Kirslis (of Decatur), Cicada Rhythm just signed with New West Records, home to legends like Steve Earl, Randall Bramblett, and John Hiatt, as well as hometown heroes like The Whigs.

Homespun folkies like DeMarcus and Kirslis couldn’t have written themselves a better meet-cute if they tried. Around six years back, Kirslis was a man of the rails, hopping freight trains and traveling across the states. On one venture, he and a friend were on a train cruising by Athens when, suddenly, the skies gave into a torrential downpour.

“That’s when they decided they’d had enough!” DeMarcus recounts with a laugh.

Calling it quits, Kirslis phoned a friend and asked to be picked up; DeMarcus, a stranger to Kirslis at the time, came along for the ride.

Thus, it began. Though the duo sparked a kinship, they wouldn’t make music together until several years later.

“I graduated and moved to Athens first,” DeMarcus, a Juilliard alum, explains. “Dave was like, ‘Athens is such a great music town; you need to find a band.’ I couldn’t find anybody I really wanted to make music with...I can’t remember who said it, but one of us said ‘we should start making music together.’ And we did.”

Kirslis, steeped in roots music, is a self-taught guitarist (“The real folk ingredient is the untaught one, and trying to do it,” he sagely notes). In the past, he had played in a blues band and dabbled in country and folk rock. Partnering with DeMarcus in Cicada Rhythm became an outlet for Kirslis’s softer, more melodic songs.

“It just kind of fell together that way,” DeMarcus recounts. “We weren’t really trying to emulate anything.”

“We didn’t have a sound we were going for,” Kirslis elaborates. “We were like, ‘what can we get away with with two people?’”

The answer? A lot. With close harmonies, the fullness of a bowed bass, crooning alluringly like the hum of the train track, and warm guitar fingerpicking, the duo is refreshingly dynamic, tight with a front-porch casual feel. Kirslis’ vocals are a perfect blend of old-time influence and modern tenacity; DeMarcus has a sun-bleached timelessness to her voice.

It’s easy to get lost in the winsome roamings of songs like “Do Not Destroy,” off their 2011 demo. While they occasionally bring in a drummer to “fortify” the songs, Kirslis and DeMarcus can spin some of the most powerful folk around with no accompaniment but their voices and the ten strings between them.

This week, New West Records will release a 7” Cicada Rhythm recorded in a little Hancock County church. Kirslis spied the location when a friend performed a quick song there and filmed it with an iPhone.

Even through a mobile phone video, Kirslis knew that the church was the location for a live Cicada Rhythm recording.

“Immediately, I was like, where is that, because it sounds so amazing!” Kirslis says. “One little pluck of a string would ring for ten seconds.”

With a generator and engineer in tow, Cicada Rhythm trekked up to the little 1800s house of worship and tracked.

“I really feel like, in our performance, we have a certain live component that doesn’t always get captured in a studio,” says Kirslis. “Andrea and I really play off the room and enjoy the room sound. This church in particular just had an amazing sound; the bass lit up the whole room. I could feel the history of the room. It was super-magical; it was just amazing.”

After the release of the 7”, New West will put out Cicada Rhythm’s first LP. As they wait on a formal release announcement, the band’s enjoying traveling and performing.

Though they’ve never played in Savannah before, the Georgians have visited in The Hostess City past.

“I was really young,” Kirslis says. “I remember some sort of horse and carriage and a ghost walk...”

If you’ve got a sweet tooth for new summer tunes, make their show a can’t-miss.