SUBSTANCE. That is what you’ll find at the heart of the music Citizen Cope creates. It’s what has endeared the man born Clarence Greenwood to a legion of fans and found a number of high profile artists, including Carlos Santana, Sheryl Crow and the late Richie Havens, recording his songs and working with him.

Cope finds himself back in public eye with the recent release of “Heroin and Helicopters,” his seventh studio outing and first album in seven years. Credit the Tennessee native’s wish to not rush the creative process for the lengthy delay between projects.

“I hadn’t been super-inspired to record. Recording is an intense process and I’d been recording and writing the whole time,” he said. “But just delving in and putting an album out and making a statement—I didn’t want to dilute the stuff that I’d done before by just putting something out.”

Interestingly enough, the album’s title came out of a conversation Cope had with Santana. In the process, it also came to represent something entirely different from the Rock and Roll Hall of Famer’s original meaning.

“I was playing the Fillmore at San Francisco and Carlos Santana came. I got a chance to meet him for the first time and he said that whatever I do, to watch out for the two ‘H’s—heroin and helicopters.’ He said they don’t mix well with musicians. I kind of felt like, still today, somewhat of a prophetic kind of statement,” Cope recalled. 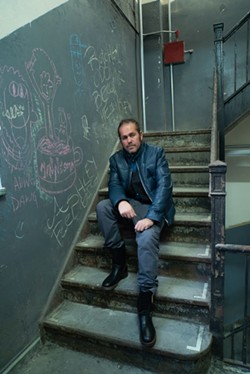 “What it is today as far as society’s objective tendencies—and not just substance abuse, but all the different kinds of social media and cell phones and losing sight of life because of things like this. And the helicopter part is a good analogy for people taking shortcuts and trying to get to places really fast without enjoying and understanding the journey. It’s how technology is basically kind of hyper-speeding us out of what is possibly our true purpose, which is to find some peace and happiness.”

“Heroin and Helicopters” proves the hiatus from recording was well worth the time away. Cope’s soothing drawl is woven amid lazy beats and significant grooves. Highlights, include the uplifting “Justice,” which wraps a message of love and optimism around subtle strings and mellotron-flavored nuances that lend a kaleidoscopic vibe to the song, or “The River,” where his remorse cascades over a bare drumbeat and the slightest jangle as he sings, “See I never wanted to lose your love/I just wanted to choose your love/Lost in a moment of confusion/Now it’s all an illusion.”

Elsewhere, he uses a baseball metaphor of striking out to not only represent loss and failure as an inherent part of life, but one in which growth can be part of a natural progression. It all ends up being a rich sonic meal that gets better with repeated plays.

The current tour figures to present these songs in a favorable manner, as Cope is hitting the road with a full complement of musicians and a creative evolution with which he’s become quite pleased.

“I think my voice sounds a lot better now. I’ve been singing a lot and played a lot of shows,” he explained. “I’m more confident on the microphone, and I think my drums sound really great. I think that having a child somewhat changes your perspective a little bit. It’s a different recording of a different part of my life.

“[As for these shows], it’s probably going to be some of the new record and songs from the catalog that people have become attached to. It’s a pretty long set, sometimes not too long and sometimes I’ll do a couple of acoustic songs. But it’s a full band tour.”

Greenwood’s journey started out as a young kid enthralled by a Jackson 5 record growing up in Greenville, MS and eventually being inspired to start writing poetry. Hip hop proved to be an early influence (“I think ‘The Low End Theory’ (by a Tribe Called Quest) is a masterpiece and I also loved ‘Criminal Minded’ by Boogie Down Productions) and by the age of 19, he was cutting his own demos.

He soon caught the attention of Basehead founding member Michael Ivey, who roped his Washington D.C. neighbor into being his DJ when the group went on the road. His 1992 self-released Cope Citizen was Greenwood’s first foray into recording via a limited run of 500 copies, but then Dreamworks Records came knocking and gave him his first major label release, 2002’s “Citizen Cope.”

By this time, the music industry was in upheaval and Cope bounced around to RCA and Arista before striking out as an independent artist with the release of 2010’s “The Rainwater LP” (also the name of his imprint). And while this may have seemed like a recent development in how artists were being handled, Cope feels he was part of a long-running cycle.

“There are a lot of middle men and there are a lot of emotionally and spiritually challenged young artists that are out there and not financially stable and are available to be taken advantage of by the numerous middle men. I don’t think it’s changed that much over the course of time since recorded music started. It’s always been like the artist is the talent, the talent is disposable and while we go through what we go through and inspire people, [the powers-that-be] move on to somebody else. It is a rotten business, but there are good people involved in it,” he pointed out.

“I would be remiss if I didn’t say that I was very fortunate to have all the opportunities that I’ve had. I had some great opportunities and learned some really valuable lessons and met some great people along the way. Overall, the way that the talent is treated, that could work in a better way because I feel like there’s a lot of animosity towards the artist from the industry and I think there always has been.”

In addition to his own touring, Cope hopes to hit the road again with wife and fellow artist Alice Smith in the near future. But for him, he’ll continue to keep his focus on the big picture.

“I’m really looking at the long-term effect of this album and building up the live thing. I want to continue working on my personal growth and evaluating the mistakes I made,” he explained.

“I’m also trying to reconnect with the things I knew innately that I lost sight of. So I guess it’s just personal growth and strengthening relationships that I’ve had over the years—like being a great father.”

Chris Jericho's Fozzy returns with a performance at Victory North