“From Enslavement to Emancipation” Opening

IT'S EVIDENT that this brave new world has spawned a divergent reality, where power fantasies become facts and denial is a top diplomatic strategy (and also a river in the Middle East full of deported Muslim immigrants.)

While the rest of us are over here eyeballing the cracks in the matrix and staying away from any dams, history continues to be hijacked and logical fallacy abounds.

In a week of outrageous examples, one nasty one hails from Illinois, where a local political cartoonist used the framework of Norman Rockwell’s iconic 1964 portrait of African American first grader Ruby Bridges being escorted to school during the first days of desegregation to draw a correlation with Secretary of Education Betsy “How Does This Pencil Work” DeVos, who met resistance recently when she tried to mince her way up the stairs for a photo op at a Washington, DC middle school. 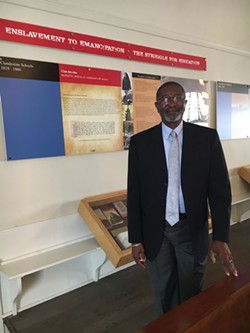 Ulysses “Chief” Bryant was one of the first brave students to integrate Savannah’s public schools and will share his experiences at the Massie Heritage Center on Feb. 24.

This comparison paints DeVos as unjustly oppressed because her conservative values are somehow “under attack.” Since it’s possible to misinterpret Norman Rockwell references (*clears throat*), let’s elucidate: Ruby Bridges was a little girl who had to be physically protected from hateful bigots because she was black.

Betsy DeVos is a rich grown woman who wasn’t welcomed by public school advocates because she’s bent on shunting tax dollars away from them in order to further a privatized religious agenda.

So beware the whitewash of false equivalence. There’s a lot of talk about Truth lately, the capital T signifying a collective reality backed up by facts. Yet our perception of Truth is easy to mess around with, and even physics proves it’s all subjective anyway. (Google “quantum entanglement”—gah!)

Seems like facts aren’t necessarily as important these days as gaining control of the narrative, and the way to do that is to, well, narrate. Pushing against the irony of the DeVos cartoon—during Black History Month, no less!—is the story of Ulysses “Chief” Bryant, who knows something about the tumult of school desegregation right here in Savannah.

After the courts mandated local schools to integrate in 1963, Savannah met the minimal requirements by opening two of its high schools to black students. Then a rising senior at Sol C. Johnson High, young Ulysses had no interest in transferring to all-white Savannah High—until Civil Rights activist W.W. Law came knocking.

“Mama didn’t want us marching or sitting in, but she respected Mr. Law,” says Bryant, the oldest of four boys. “He felt I was academically prepared and that I had the character and mental stability to be first.”

While Savannah didn’t see the blood and rage of other Southern cities during that year, he and his fellow African American students experienced other types of aggression, white kids turning their backs on them in class and knocking their books to the ground in the hallways. Bryant was once clocked in the head with a plank during wood shop.

“It wasn’t so much a ‘glad to have you’-type feeling,” drily recalls the gentleman who went on to a career heading up the safety and security for the entire Savannah-Chatham school system.

In a stark contrast to Baffled Betsy’s blank stare, there’s a photo of the 18 year-old future chief walking up the cement steps with a worried crease in his forehead on that momentous day, one of the artifacts featured in “From Enslavement to Emancipation,” a new exhibit opening this week at the Massie Heritage Center. Chief Bryant will lead the program on Feb. 24, preceded by walking tours of nearby African American sites.

The engrossing exhibit fills in 150 years of local history with enlightening details, following African American education in Savannah from the days of Haitian immigrant Julien Froumontaine’s school, which operated the city council passed laws in 1829 designed to keep enslaved people from realizing the power of literacy. Heroes like Mother Matilda Beasley and James Simms risked public whipping for teaching black children in secret during slavery, and Suzie King Taylor and James Porter took up the mantle to demand public education via the Freedmen’s Bureau schools—of which the Massie School served as briefly in 1865.

Much of the Civil Rights-era portion of the exhibit consists of recently discovered legal paperwork and other documentation pertaining to desegregation, noting the differences in class sizes and laying out the ledgers of how black teachers were paid far less than their white counterparts.

These certified facts reminds how pliable history can be in terms of accepting new information to form a more complete truth, and how the more perspectives we add to the narrative, the stronger it becomes.

The inclusion of African American history into Savannah’s metanarrative only completes and strengthens the experience of this place for all of us, and even lesser-known pieces are coming to light, thanks to the high schoolers of Deep Center’s Block-by-Block program. The young writers meet every week at the Carnegie Library on Henry Street—Savannah’s oldest, built by the black community over a 100 years ago—to research and preserve the stories of the Eastside neighborhoods.

So far they’ve reintroduced Civil Rights veteran Benjamin Van Clark back to the future as well as the almost-forgotten neighborhood known as Tent City, a self-sustaining black community complete with gardens that was destroyed to make way for public housing in the 1930s.

“We’re looking at history of self and community, exploring it, understanding it and owning it,” explains facilitator and author Trelani Michelle. “It’s about taking ownership of the narrative of where you live, then going back and adding to the dialogue.”

I love this, because it means our youngest citizens are making sure the stories that matter to them are included every day, not just for one month a year. While the success of “Hidden Figures “and Colson Whitehead’s ‘The Underground Railroad” (anyone get their copy signed at the Savannah Book Festival?) have diversified the canon as of late, the facts of history must contain multiple perspectives if it is to represent human experience.

Just as school desegregation cannot be distilled to the image of one little girl, the story of Savannah can’t be truly represented by a lit-up statue of General Oglethorpe, handsome as he is over there in Chippewa Square. Nor will the narrative of America be simplified by those who would distort it for their own ethical gymnastics.

The best resistance is more stories, millions of them, told so many times that they finally break the dam and spill over into the mainstream we call Truth, never to be held back again.