Close to the 'Bone

Every day is sunshine for Fishbone bassist Norwood Fisher

Back in the very late 80s, when hair bands were already flat and grunge music had yet to don its flannels, something weird appeared on the bill of my favorite all–ages club in Tucson, Az.

“Fishbone, eh?” I read as I examined the poster, a college freshman wandering lost between Rick James and the Butthole Surfers. “A bunch of black guys with mohawks and horns from L.A.? I’m in.”

That evening, my worldview changed forever. Was this rock? Ska? Punk? I didn’t know, I didn’t care, I just wanted to keep on dancing. As frontman Angelo Moore alternately sang, played sax and scrambled around the stage like an unholy dervish while bassist Norwood Fisher sagely kept funkadelic rock–steady time, I understood once and for all that genius always defies genre.

I went on to become a fan of all the big L.A. alternative bands that came after, the requisite Red Hot Chili Peppers, No Doubt and Primus, but I always held up Fishbone as the hardest, fastest and baddest of ‘em all.

Compared to Moore’s mind–defying acrobatics (this was long before stage–diving and playing naked became a national pastime), the Chili Peppers’ Anthony Kiedis and No Doubt’s bleach–blonde crooner Gwen Stefani seemed like preening teenagers. It seems a great injustice that those L.A. bands clearly influenced by Fishbone went on to fame and fortune while their mentors never quite made it across the arc of success.

That’s the bittersweet takeaway of Everyday Sunshine: The Story of Fishbone, a 2010 documentary directed by Lev Anderson and Chris Metzler screening this week as part of the Psychotronic Film Festival.

At least those momentous names know to pay homage: Stefani, Chili Peppers’ bassist Flea and Primus’ Les Claypool are eager to give props to the band they once shared little club stages with; they’re joined onscreen by other superstars like Ice–T, George Clinton and Branford Marsalis to laud Fishbone’s pure good vibe.

Five of the Fishbone boys met up in South Central Los Angeles in the late 70s as the embers of the Watts riots were still warm, so this film had to be more than just another rock biopic.

Narrated in the badass baritone of actor Laurence Fishburne, the first 20 minutes employs crafty animation and a socio–economic history lesson you won’t find in any textbook, a humbling reminder of how deep the racial divide was on the West Coast in Reagan’s America. These kids skipped over it with bone–shakin’ rhythms that, Fishburne notes, “made it OK for the black kids to slam dance and brought the funk to the punk.”

It’s within this context that Fishbone’s origins are so interesting and completely unlikely: As harsh hip–hop and gang violence ruled their neighborhoods, this group of kids found a world of liberal freedoms when they were bused into the wealthy, white San Fernando Valley as part of the city’s efforts to desegregate public schools.

At Hale Junior High, they encountered the ever–smiling Angelo Moore, the only African–American in his suburban neighborhood and itching to rebel against his religious upbringing. Together they gathered up every and any musical influence they liked, spawning a sound that knocked the socks off of everyone within earshot.

From epic afternoon rehearsals in Norwood Fisher’s bedroom, they launched right into the mosh pit of L.A.’s club scene.

“We wanted to show their journey over the last 30 years,” said Anderson over the phone from L.A. “They were so innocent, as much as punk rock could be, and they went through the wringer. But they survived.”

By the “wringer,” Anderson is referring to the music business. Fishbone released several albums with Columbia Records after catching the ear of producer David Kahne, whose bosses couldn’t wrap their minds around these African–American musicians who could not even begin to fit under the R&B label. Since their songs could not be defined as “pop” or “rock,” radio play was out of the question, and the marketing conundrum wasn’t worth company time once the easy–to–sell Britneys and Christinas hit the airwaves. After guitarist Kendall Jones’ mental meltdown and subsequent decampment, the group once heralded as the kings of alternative music became just another band scratching out a living.

Their legend lives on with those who remember, and Everyday Sunshine reflects the same delicious, frenetic energy that made the band’s live shows so intense. Co–director Anderson has been a Fishbone fan ever since he saw them with his dad in Portland, Ore. in the late 90s, when he was 10 years old.

“They just seemed like such characters,” he recalls. “When I decided to do a music documentary, I couldn’t think of a better band.”

He and Metzler followed the remaining members of Fishbone through two European tours in the mid–to–late 2000s, capturing the hardcore dedication of fans and a few rock–bottom days of playing to apathetic clusters of old folks. Still pushing his level–11 antics in small clubs around the world, Moore radiates his signature big–toothed charisma, though the lines around his eyes show weariness as he veers off into the artistic weeds with his theremin. Ultimately, his optimism and satisfaction in living an artful life shine through.

“Angelo is someone who’s an artist twenty–four–seven,” said Anderson. “He may be a little bitter about the way it’s all gone down, but I don’t think he would do it any other way.”

Since its release in 2010, Everyday Sunshine has made the rounds of film festivals around the country, racking up awards. Variety called the documentary “an inspirational, happy film about failure.” Savannah’s Psychotronic Film Festival, known for its thoughtful curation of little–known cult classics as well as wacktaculous choices that include deaf vampires and machete–wielding maidens, seems a fitting vehicle.

“The entire notion of my film society is based around championing and promoting movies which are hard to categorize and don’t easily fit within standard genres, a description that fits Fishbone to a proverbial ‘T’,” says Jim Reed, Executive and Artistic Director of the Psychotronic Film Society of Savannah.

“A well–made indie documentary about such a band is like a Psychotronic double–whammy.” 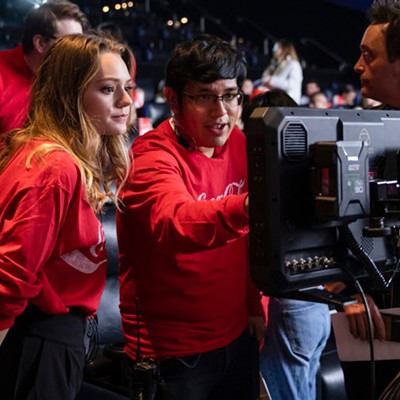