Closing streets to open them 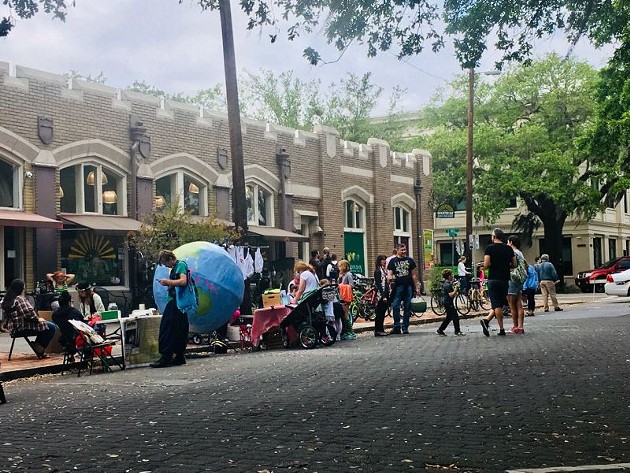 Park Ave between Drayton and Bull streets was closed to cars, but not to people, during the Earth Day Festival in Forsyth Park. People strolled, pedaled, talked, and enjoyed the street. Cars were excluded from one block, but the world did not end.

HOW MANY parking spots on the south side of Forsyth Park are empty at any given time? This riddle has been pondered by many in the wake of a proposal to meter spaces in along Park Avenue.

I can tell you that on one recent Saturday all of them were empty, or at least empty of cars. That’s because Park Avenue was closed to motor vehicle traffic between Bull and Drayton streets during the annual Savannah Earth Day Festival on April 21.

The closure enabled festival attendees to visit displays set up in the street. But more importantly, it allowed people of all ages to enjoy a Saturday afternoon on Park Avenue without having to remain on high alert for speeding cars and trucks.

Kids played, parents had conversations with other adult humans, and groups of people enjoying food from the Sentient Bean and Brighter Day spilled off the sidewalk into the street. It was idyllic and something that would make Forsyth Park safer and more enjoyable every Saturday.

On Saturday mornings Park Avenue is hopping. Folks coming and going from the Forsyth Farmers Market attempt to cross the street amid a steady stream of cars, transforming the three-way intersection at Bull Street into a perpetual scene of potential conflict.

On April 21, however, that all changed. People were able to freely cross into the park and even linger in the street if they chose, protected by a temporary barrier. And, no, closure did not usher in the carpocalypse. Drivers seemed to get around just fine with one block taken out of service.

Closing streets to automobile traffic and making them “Open Streets” for people is a tactic used all over the world to encourage residents and visitors to go outside, participate in events, or simply enjoy public space. In Bogotá Columbia, where “Ciclovias” have been held since the 1970s, major arterials are closed to car and truck traffic on Sundays and holidays.

The streets are given over to walkers, runners, skaters, and bike riders. Some 30 percent of the city’s population participates, and that means millions of people enjoy streets free of traffic for free (they don’t have to register for a 5K or marathon to gain access).

In 2013 Savannah took a stab at this when it was one of 10 cities nationwide selected for a Play Streets grant. The grant provided by Blue Cross Blue Shield and the Partnership for a Healthier America, was “intended to bring public events for families to the streets — giving children and families a chance to be active, and have fun.”

I attended some of the Play Streets planning meetings and learned the guiding principle for selecting where Play Streets events could be held: Don’t disrupt motor vehicle traffic on major streets.

That ruled out Bull Street. Broughton Street, too.

On May 19 of that year, two blocks of Pennsylvania Avenue were closed to traffic for three hours so that children could participate in a Play Streets bike rodeo. On that very same day, cars and trucks were excluded from 2.7 miles of Peachtree Street in Midtown Atlanta for an Atlanta Streets Alive event.

I don’t visit Atlanta as often as I used to, but I presume Peachtree Street is still considered a major street. Atlanta Streets Alive will be held again on 3.1 miles of Peachtree Street, from Downtown to Midtown, in September.

Last month 4.4 miles of DeKalb Avenue/Decatur Street were transformed into an Open Street for people by temporarily closing them to cars “to create a whole new healthy, sustainable, and vibrant city street experience.”

Again, I’m not super up to date on Atlanta traffic patterns, but I lived three blocks from DeKalb Avenue about 20 years ago and I can assure you it was a major thoroughfare back then. I can’t imagine this has changed.

Star Trek fans will tell you that Starfleet General Order 1 prohibits interference with developing civilizations. In Savannah, our Prime Directive seems aimed at preventing a different type of interference: We go to great lengths to guard against even the slightest inconvenience to motorists.

Those of us who drive have enjoyed a position of privilege on our streets. This has made it difficult to organize Open Streets events in Savannah.

Lt. Worf famously said, “Captain, sensors indicate a disturbance in sector one-zero-eight,” and I, too, am receiving some interesting readings from all over our sector. Residents are tired of neighborhood streets being used as highways.

They want our city to be a place where not just the bold, but everyone can use our streets.