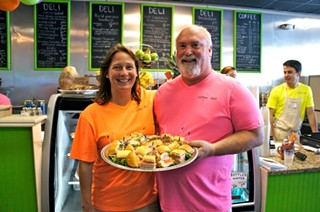 Last week Johnny Baker and Paula Letcher officially opened their new eatery, coffee.deli, in Habersham Village, but don't call them the new kids on the block.

Their other restaurant, bar.food, has been kicking along successfully three doors down for the past five years, making them practically elders in this booming midtown commercial strip. Back in 2008, no one was sure any such venture would fly in what was then a pretty sleepy spot.

"When we opened bar.food, there were still a ton of vacant storefronts," recalls Letcher, referring to real estate now occupied by Marco's Pizza, Barberito's and Bikram Yoga Savannah.

"We were not necessarily the favorite child coming in with a bar, but I think we've fit into the neighborhood quite well."

The hotspot has indeed earned a loyal patronage and anchored the area's rising popularity. The new coffee.deli is located in the former Ogeechee River Coffee Company location, echoing its sibling's modern-yet-cozy vibe with functional design and lime green accents.

Besides the caffeinated essentials, coffee.deli offers a simple, nourishing menu of sandwiches, salads and sweet treats. Breakfast options range from egg-and-cheese on sourdough ($5) to a bagel-and-lox platter accompanied by all the necessary accoutrements (capers, onion, tomatoes, lettuce, lemon wedge) for $8.50. The chicken, tuna and egg salads are all housemade, and Baker woods-smokes the salmon himself.

Baker — a longtime mainstay in Savannah's catering and restaurant scene — has made his first foray into deli fare: He brines the turkey and corned beef in the kitchen and is hard at work perfecting the pastrami.

"I've done soul food most of my life. I've cooked kosher. I've done the Asian-influenced thing over at bar.food. So now's the time—OK, let's do meat!" he chuckles.

The sandwiches ($9) are piled high with a half-pound of Baker's seasoned meat; the classic Reuben resembles something out of a Dagwood comic book. Vegetarians can satiate with the Apple Brie grilled cheese ($7), Southern Tomato ($6) and a hummus lettuce wrap ($6). Look for Baker's daily specials, like meatloaf with carmelized onions.

Open from 6 a.m. to 10 p.m., coffee.deli sees mealtime traffic as well as those who bring laptops and set up shop for a few hours. Local realtors have found it to be convenient meeting place, and a set of strollers is usually parked outside as parents enjoy a coffee fix while the kids play on the plush couches.

"I think this is going to be an important part of the renaissance of Habersham Village," comments nearby resident Michael Jordan as he holds his toddler, Joseph.

"It's just as much fun to come here as downtown but it's still laid back."

Cultivating community has been a staple in bar.food's success, and Letcher and Baker are applying the same commitment to local charitable causes, including a pet food drive for the Humane Society at their grand opening event last week.

While concern abounds among HabVil proprietors that the insufficient planning of the nearby Avenues on 61st development will cause parking snafus, Letcher hopes that the new residents will abide by the no-overnight parking policy in the spaces reserved for customers.

"We'll just have to deal with it as it comes up," she says.

In the meantime, she and Baker bounce between their bustling eateries from dawn 'til way past dusk. Somehow, they keep the energy high.

"We've got a good, positive staff with a great work ethic. Plus we have systems in place, which keeps things simple," smiles Letcher.

She says that adherence to basics is part of their recipe for success for bar.food and now coffee.deli, right down to the names:

"It says what it means. Can't beat that."