MEASURED by its knowledge of wildlife and conservation, the collection of canoes and kayaks floating down the tea-black water of Ebenezer Creek embodied a good bit of Georgia’s brain trust.

Representatives from four different Riverkeepers, the Georgia Conservancy and several other prominent ecological organizations paddled slowly amongst the swollen skirts of the cypress trees and lovebugs last week, demonstrating that their intellectual prowess applies to biology as much as it does to policy.

“Prothonotary warbler,” called out Alice Keyes, Vice President of Coastal Conservation for One Hundred Miles as a small, lemon-colored bird alighted on the branch of a tupelo tree.

“Or maybe a yellow warbler.”

The group of 20 or so local and regional environmentalists and activists was led by naturalist Lewis Taylor, who was the first to survey the newly-minted Ebenezer Creek landmark for the Park Service in the early 1970s.

“I’ve been coming out here for forty years, and it still feels like a cathedral,” murmured Taylor, guiding the nose of his canoe through a knot of cypress knees.

As much as these folks like to be outside, it’s unusual for them to all be on the same river—let alone in the same room—at the same time. But it may be happening more often with the formation of the Georgia Coastal Collaborative, an alliance of 12 of the hardest-working environmental advocacy groups in the state. 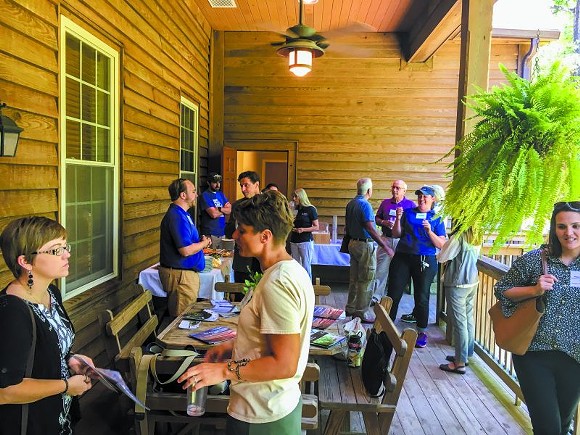 Members of the newly-formed Georgia Coastal Collaborative gathered at the New Ebenezer Retreat Center to discuss their shared mission.

After two years of talks, One Hundred Miles, the Georgia Conservancy and the Savannah, Ogeechee, Satilla and Altamaha Riverkeeper organizations have joined forces with Center for a Sustainable Coast, the St. Simons Island Land Trust and the Georgia-Alabama Land Trust to help make the individual work of each group more visible. More support comes from the state chapter of the Nature Conservancy, with added clout from longtime legal allies of the Southern Environmental Law Group and GreenLaw.

“Fundamentally an effort to raise all boats” as described in its mission, the GCC officially launched the same afternoon as the flotilla on Ebenezer Creek with a positive, cohesive vision of communicating the need for awareness and action on behalf of the Georgia coast.

“We each have our own issues and priorities for our communities, but we need to work together to ensure the future,” explained One Hundred Miles CEO Megan Derosiers.

“We face unprecedented threats, and we can’t address them as individuals.”

With four rivers, a hundred miles of coastline and thousands of square miles of marshes and wetlands in between, the threats to the Georgia coast are indeed myriad and pernicious.

Sea levels are estimated to rise by as much as two feet by 2050, and the rate of land consumption has far outpaced population growth in coastal areas.

But that doesn’t mean the GCC is against sustainable growth and sensible economic development.

“The coast can grow and prosper without ruining it,” assured David Pope of the St. Simons Island Land Trust at the launch event hosted by New Ebenezer Retreat.

“But we have to protect it first.”

While all of the GCC’s organizations concede that point, they don’t always agree on how it’s done.

The Center for A Sustainable Coast has diverged from some of the other the groups in its vocal stance against climate change and its causes, a topic some advocates have avoided addressing directly because of its divisive political implications.

Before it stalled out in the Senate in March, the Shore Protection Act also caused some disagreement in the coastal advocacy community on the exact size and attributes of an ideal land buffer for development. (The bill called for a 25-foot straight line, which almost everyone concurred won’t work.)

“These issues get complicated very quickly, and there are different ways to approach these challenges. We are not in lockstep with each other on every issue,” said CFACS board chair Steve Willis.

“But I’d rather there be open disagreements that repress the discussion.”

The Georgia Coast Collective has no fundraising arm and is not meant to replace or replicate the work of its member organizations—nor does it imply an endorsement of each other’s policies and procedures. But with landlocked state legislators making the decisions on legislation affecting the coast, it makes sense to present a unified front moving forward.

“We don’t get a choice,” shrugged Savannah Riverkeeper Tonya Bonitabus.

“We have to work together if we want to succeed in protecting these resources.”

A key component of the GCC is to encourage Georgia citizens to get out to the beaches and waterways to understand the value of protecting the coast.

“We want to reconnect people to the water,” said SRK outreach coordinator Jacob Oblander, who was recently hired to oversee the Savannah office at the Houlihan Boat Ramp.

“People are surprised how many beautiful places are on the Savannah River.”

While recreation is one of GCC’s goals, policy and politics are a priority. First up in the collective agenda are the projected degradations and toxic waste coming from a new $43 million turpentine facility being built on Ebenezer Creek, just a few miles upriver from the Tommy Long Landing where coastal Georgia’s environmental advocates put in their kayaks.

(A public hearing sponsored by the Georgia EPD on the permit application for DRT America is scheduled for 7pm this Wednesday May 17th at the Administrative Complex of the Effingham County Commissioners in Springfield.)

The tannin waters of the ancient tupelo gum swamp and its thousand year old trees remained tranquil for Georgia’s conservation activists last week, the only sounds coming from the creek lapping against the boats and the tweeting of the birds.

“Definitely a prothonotary warbler,” nodded Keyes as she and her compatriots dipped their paddles a few hundred yards from where the Ebenezer meets the Savannah River.

For sure, the Georgia Coast Collective has many fronts to fight in the defense of the state’s precious ecology. But like the confluence of rivers it has sworn to protect, one can’t help but think its combined effort makes for a mighty current. cs