The Curious Incident of the Dog in the Night-Time opens Dec. 6

Collective Face Theatre Ensemble is preparing to take on a truly unique story—The Curious Incident of the Dog in the Night-Time. The show, based on Mark Haddon's best-selling novel and adapted by Simon Stephens, follows a boy named Christopher who sets out to investigate the death of his neighbor's dog. Christopher, who is on the Autism spectrum, discovers "life-changing secrets" along the way.

Ahead of opening night at the Kennedy Fine Arts Auditorium at Savannah State University on Fri., Dec. 6, we spoke to director and Collective Face founder David Poole about what audiences can expect from the show.

What drew you to this play?

Well, we were planning on doing another show for this time slot, actually. What ended up happening is that the rights became unavailable, so I was looking at shows that would fit with our season theme of impostering identities. This was a show that was on our bucket list, and it was a show that a lot of people were talking about and still are talking about. It hasn’t been done in the Lowcountry area before, so this has become the Lowcountry premiere of it.

The closest production that I found was in Macon, so when we announced that we were going to do it, I went to the Macon production, which was wonderful, and I was sitting there going, “How can we make this our own?” Most productions right now are doing a very high-tech set, and are doing it as close to the Broadway production as possible.

I was really interested in the story, and the way that it’s [written] which is a pure ensemble-based show. That’s right up my alley. It reminds me of other shows we’ve done in the past, so when I came across it I was like, “This is the one.”

A lot has been made about Christopher and him being on the spectrum. How do you, as a director and wholly as an ensemble, approach the portrayal of a character like that? 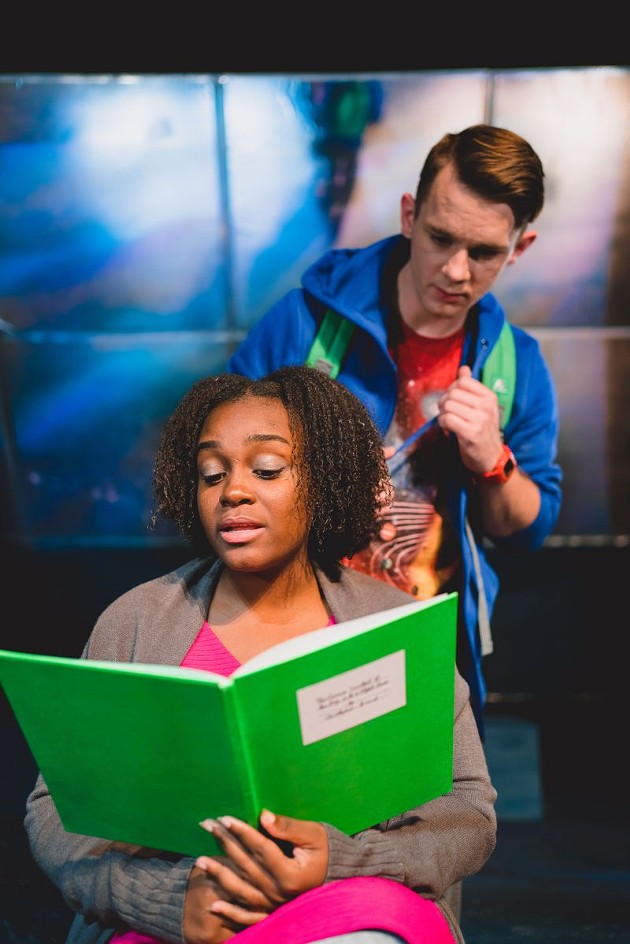 We’ve approached this whole idea of a play within a play within a play with the idea that these are players performing Christopher’s play. It’s written in the script that way, but I think we kind of bumped it a little bit more. In our research, I found all of this information about the National Theatre in London’s production. One of the things I found was a documentary from Christopher’s point of view, and they interviewed the director and the prop people and the actors. His narration would be like, “This is the actor that’s playing my psychiatrist.” There are moments where he breaks the fourth wall and says, “No, this isn’t the way it goes.”

I’ve investigated this kind of “play within a play” notion ever since my undergraduate studies almost 20 years ago. You’re actors—you’re players who are coming on to the stage, and you have a designated performance space. When you step into the performance space, you’re a character. In this case, it’s the character in Christopher’s mind. So it’s a very complicated notion that the actors have to journey through. It’s a fascinating play, and it’s so well written that no wonder it took Broadway and the West End by storm.

And right now, it’s one of the most-produced plays in America.

I noticed there were several news stories about it because of how many theaters are doing it currently!

Right! It’s very cool. It’s a very popular play, and a lot of theater companies that I’ve worked with out of state are doing it. We’re all doing this play at the same time! Hopefully it doesn’t get oversaturated [laughs]. I’m just thrilled that we’re the first ones in the area to do it.

Is there a moment in the show that you’ve enjoyed directing so far?

Oh, there are a few moments! There’s the end of Act I, which we can’t give away [laughs]. The moment between Ed, Christopher’s father, and his son, is just heartbreaking. And Siobhan, who is the psychiatrist and teacher of his, there’s a moment in Act II where she realizes that she’s not his mother—it’s this moment of separation. She realizes that she’s grown to love him like he would be her son, but that ultimately she’s not his mother.

It’s heartbreaking. But it’s such a real moment. That moment was so powerful to direct. Madonna, who’s playing the role, had a breakthrough at rehearsal the other night and I was like, “Wow, it’s going to be so good.” These moments are so powerful and so wonderful. It’s a great, wonderful, evening of theater.