A plate prepared by A.K. Tran of Sushi Time Towa, including the SkIO sea bass

THOUGH FEW locals seem to know about it, one of the most expansive educational facilities in the entire region is the Skidaway Institute of Oceanography.

An independent arm of the state university system, the Institute (which usually just goes by “SkIO”) hosts several different entitities on its sprawling campus along the Skidaway River — the former Modena plantation, a gift from the Roebling family in the late ‘60s.

While by far its most recognizable “tenant” is the University of Georgia Marine Extension Center and its popular aquarium, it’s not just the Bulldogs that are represented at SkIO. Georgia Tech, Georgia Southern, Savannah State and others have a research presence as well. (In addition, the local public radio station, FM 91, broadcasts from a trailer onsite.)

A current research effort at SkIO involves the search for a solution to the crunch facing a popular area crop, the black sea bass. A staple item in many seafood and Asian restaurants, numbers of the fish are decreasing as demand for it increases.

“Black sea bass is a very popular fish here,” Lee says. “The minute black sea bass comes in at Russo Seafood, it’s gone. This has put quite a lot of pressure on this fish, to the point where the legal limit has been raised because of the demand for it.”

Lee says the going rate for a two-pound black sea bass, providing 30-40 sashimi slices, is about $20, but that can easily double in the case of the sushi market overseas.

In the SkIO project, the water in the long pens in which the bass are raised is recycled, with no pollutants being released into natural waterways — not the case with most fish farms, which increasingly are seen as part of the problem of overfishing rather than part of the solution.

Another facet of the SkIO project is that it feeds the black sea bass a diet of juvenile tilapia, rather than the preformed food pellets used by most fish farms.

“If you use the pellets, you have a waste problem. About thirty percent of them aren’t eaten,” Lee explains.

“But tilapia are easy to keep and feed and breed. And because they’re freshwater fish, that avoids a lot of problems with disease, because there’s very little chance of a disease moving from freshwater to saltwater,” he says.

Lee says there’s no waste with the tilapia, since if they’re not eaten right away, “they just keep on swimming around until they are.”

Though freshwater fish, tilapia can survive several days in a saline environment, but are almost always consumed by the bass within that time anyway.

The sea bass and the aquaponic produce took part in a blind taste test last week, as invited guests gathered at SkIO’s Roebling House to give their input as to how well the project might fare with actual consumers.

The former was healthy and well-textured, but lacking any strong taste either way. The second was good, but had a strong aftertaste. The SkIO sushi had a distinctive tang that wasn’t unpleasant, but frankly might limit its mass market appeal.

The produce was uniformly excellent, both in texture and in taste.

So what role does Lee see for SkIO in putting these products to market?

“We don’t necessarily see us getting involved in actually making money off of it, because that might conflict with our mission here,” he says.

“But for example, if we could get something going down in McIntosh County — the poorest county in Georgia — and help create 40 or 50 new jobs there, that would be a great service we could provide to the area.”

'26 Hours on the Marsh' research completed 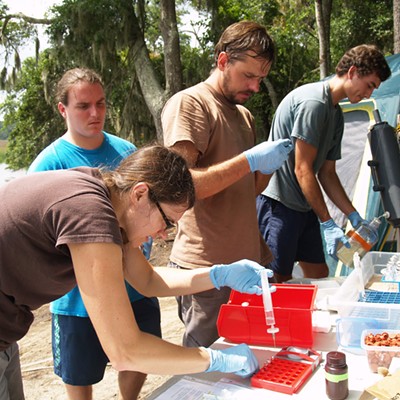 Going against the flow