College Issue: From battlefield to classroom 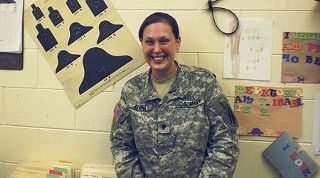 As college students return to campuses across the country this month, more of those students are armed forces veterans thanks to a change in the GI Bill last month that improves benefits and makes secondary education more attainable for those who have chosen to serve their country.

"The biggest change is that veterans can now make school their full time job," says Patrick Campbell, the Chief Legislative Counsel with the group Iraq and Afghanistan Veterans of America (IAVA). "The old school GI Bill, the most recent one, paid a paltry living allowance, and barely covered community college in most states."

Under the new bill, which was enacted on August 1, members of the armed forces who have deployed for a minimum amount of time since September 11, 2001 are eligible for benefits that cover tuition and stipends for cost of living and books.

"The number one reason why civilians join the military is for education benefits," Campbell explains. "The previous incarnation was a recruitment benefit. We've restored the GI Bill to its original purpose as a readjustment benefit."

Amongst reports that the suicide rate for service members is climbing and that as many as 30 percent of America's homeless population are veterans, Campbell and the IAVA, who heavily supported the change in benefits, hope that being able to make higher education a full time pursuit will provide veterans with time to cope with the psychological after-effects of going to war without having to worry about jobs or money during difficult economic times.

"No one goes to war and comes home unchanged, and most of the experiences you have overseas make you a stronger and better person but at the same time we all have issues we need to deal with," says Campbell. "Having people go to school, and be able to get a job, helps people to deal with those issues so much more."

Although it's still early to tell, Campbell estimates that the change in benefits could see an increase of about 20 percent in enrollment of veterans.

"The problem with the military is that a lot of people don't use their education benefits," says Spc. Bethany Atkins, a facility manager at the Armory on Eisenhower Boulevard.

Atkins is currently a senior at Armstrong Atlantic, and has used the previous GI Bill to help pay for her undergraduate studies. With only a few classes left before getting her degree, she won't be eligible for the new GI Bill benefits because although she's been enlisted for almost 12 years, she is one of the few soldiers who have never been deployed to Iraq or Afghanistan, a pre-requisite to qualify for the new benefits.

"I'm on the 10 year plan. I should have a doctor in front of my name," Atkins jokes as she describes the challenges of balancing a full time job with school and being a single parent. When she started school, Armstrong had a satellite branch in the education center on base, but after it closed, she had to start spending more time on campus.

"Armstrong isn't very accommodating for military students, or adult students for that matter," she explains. "Once you get up into your upper division classes, there's really nothing that's offered on a lunch period, on the internet, or in the evenings."

Although Atkins remains committed to finishing her degree, she explains that college life can be a difficult adjustment to make for service members, particularly when it comes to assimilating with other students.

"I struggle to find any common denominator, and that makes classes hard," she says. "If there's a class with multiple service people, we'll all end up in a corner, and usually are united against the rest of the class. You'll find that military members have the same ideas about certain subjects."

Atkins is currently majoring in Liberal Studies with a concentration in Political Science, but when classes shift toward discussions of war in the Middle East, sometimes things can get uncomfortable with liberal, anti-war students.

"These are my friends, my co-workers, so to have personal attacks, like all you people are out killing civilians...that's not necessarily the whole truth," says Atkins. "You're always gonna have a faction...who are underinformed or get all their news from Comedy Central...and then you've got the veteran's side."

Because of challenges like juggling schedules between school and work, taking classes online is growing in popularity among military students as well.

For over a decade, St. Leo University held classes on Fort Stewart and Hunter, before moving to their own location more recently. SLU is based in Florida, but has satellite campuses around the country, including one in Savannah.

"We're a trusted name in the military because St. Leo itself has been 36 years educating the military on bases from Virginia to California," says Kathleen Allen, Director of SLU's Savannah Center.

"Students can get their degrees online," explains Allen while talking about how that flexibility has become increasingly popular, particularly with military students. "It's a little early, but we have seen a few more people applying, and some more changing from Chapter 30 to Chapter 31," a switch from the old GI Bill to the new benefits.

One thing that doesn't change between military life and the transition to college life is paperwork and bureaucracy, particularly when it comes to obtaining GI Bill benefits.

"Anytime you deal with the army there's going to be red tape. Most people who've been doing it for a while are used to it," says Atkins.

However, jumping through hoops might just be part of college life now. In comparison to non-military students who have to deal with FAFSA and juggling multiple lenders to get money for school, there is just as much, if not more paperwork. "The difference is we're never going to have to pay most of it back," Atkins says with a smile.

With the job market constricting and the economy in disrepair, Atkins is expecting to re-enlist this spring and then the army pay for her to get her Masters Degree.
"I figure I'm not going to get a better job than the one I've got here, even with an education," she says "I've got a friend who just graduated with a Masters and can't get hired. I don't think my luck is gonna be much better."

Even if she can't make school her full time job, there is no doubt in her mind that the GI Bill has helped her a great deal, and will continue to do so as she looks toward the future. If it hadn't been for her perseverance along the way, it would have been much easier to give up on school and focus on work and family instead. Making the decision to stay in school a little easier is the reason why Campbell and IAVA, among others veterans groups, campaigned so hard to improve GI Bill benefits.

"This is the kind of thing we did for our grandfathers at the end of World War II and they ended up going on to build the middle class," Campbell explains. "This is an investment we're making in our veterans now that's going to reap rewards for decades."