Wayne Cook
Irene Hepler at the board at WRFS

FOR DECADES, many prospective college students both here and abroad eagerly awaited their time away at school as an opportunity to get into broadcasting — if even on a small scale.

Long before the days of podcasts and micro-transmitters, if you were a budding teenage announcer or news person, there were only three possible ways to break into (feel free to read the following four words aloud in an approximation of Gary Owens’ sonorous voice) “The Wonderful World of Radio”:

Pester the head honchos at one of your local stations into letting you intern there with the eventual possibility of your own show in the worst time slot of the day (this worked best in smaller markets with less stringent requirements for on-air talent); cobble together your own illegal (or “pirate”) radio station and hope the FCC didn’t track you to your basement and throw you in the clink (or worse yet, tell your parents); or simply wait till you got to college and make a beeline for the student-run station.

Originally conceived in the 1960s as little more than another branch of most school’s existing vocational programs, these stations soon became the place for adventurous listeners to hear the latest in popular (and decidedly un-popular) music. Though often low in wattage, and with small areas of coverage, these tiny outposts would ultimately foster the creation of an entirely new genre of rock music.

Dubbed “College Rock,” this catchall term described most any sort of post-punk rock music that was too noisy, distorted, fast, aggressive or just plain odd to be welcomed into the increasingly rigid play lists of corporate-driven stations. Before long, major record labels were hip to the fact that most daring, cutting-edge acts were being broken on these small-wattage stations.

The Savannah market has its share of college stations, including WHCJ-FM (broadcast from the campus of the historically-black Savannah State College), which emphasizes African-American-related programming, such as jazz, blues and reggae.

However, there is only one truly “out there” local station affiliated with an institute of higher learning, and that is the Savannah College of Art & Design’s WRFS, otherwise known as SCAD Radio — which has been functioning since January, 2002.

Based on the pioneering free-form college radio stations of the ‘70s and ‘80s, WRFS is totally student-run, and features the widest variety of music heard on any station originating locally — either as part of themed “Specialty Shows” hosted by individual students on a recurring basis, or in regular rotation, where one is likely to hear positive rapper Common, Canadian art-pop sensations Metric, experimental Americana stalwarts Wilco, and techno pioneers The Chemical Brothers in a row.

Locals who spent their own college years in cities with well-known and long-established college stations (such as in Atlanta or Athens, Ga.) may be surprised to learn that such diverse, unpredictable and downright challenging music is readily available in Savannah. That’s because you won’t hear WRFS on your standard FM (or AM) dial.

SCAD radio is not broadcast. It’s Webcast. Meaning it’s an Internet-based station one listens to online in real-time. Logging on to www.scadradio.org affords free access to the station’s round-the-clock programming. All the music, public service announcements, student DJ banter and live performances exist as high-quality streaming MP3 and RealMedia files which can be opened through iTunes and other types of free software found on most computers.

It’s true that for a brief time period a few years back, WRFS was simulcast on the legal (but so-small-it-required-no-license) 1520 AM band, but that low-fi signal barely made it a half-mile from their studios.

SCAD’s Student Media Advisor, John Bennett (an experienced college broadcaster who played a key role in launching WRFS) says of that experiment, “We were never truly satisfied with the signal range or quality and elected to concentrate exclusively on Internet delivery. The first song broadcast on that transmitter was ‘Brain Damage’ by local band GAM. Perhaps that somehow damaged our equipment, causing those deficiencies.”

The guiding philosophy of this station is to provide not only Savannah, but —through the miracle of technology— listeners all over the world with programming not currently featured on local airwaves, MTV, VH1, BET or CMT. So far, Bennett is very pleased with the quality of work being done by the station’s student staff.

“SCAD Radio has received numerous national awards for news programming over the last two years,” he says. “The station is a finalist for a Society of Professional Journalists radio news award.”

Bennett feels the high caliber of the work is due in great part to the fact that whereas many might deem an Internet-only station as somehow less “legit” than one pushing a full-fledged FM signal, he has seen to it that WRFS operates under the same standards as broadcast stations.

“One thing we’ve insisted on from the very start is that SCAD Radio is operated in accordance with FCC ‘non-commercial’ regulations, even though as an Internet-only station it’s under no legal obligation to do so. Our students gain ‘real world’ experience, providing industry-standard skills they can use after they graduate.”

That’s something WRFS General Manager Stephanie Adamo can personally attest to. She credits her work at the station with not only changing her outlook on music in general, but with helping her get an impressive leg up in a business that’s notoriously hard to break into.

“Without SCAD Radio my life would be so boring,’ she enthuses. “It has exposed me to so many new types of music. When I first came to college I was strictly a punk rock, classic rock kind of girl, and even though both are still my mainstays, I have discovered the magic that is electronic music, country and good old indie-rock.”

“Also I wouldn’t be doing what I’m doing without it. I came to SCAD as a Performing Arts major, and now I’m a senior in Sound Design who was able to get an internship this summer at The Bowery Presents in New York City. I worked at The Bowery Ballroom and Mercury Lounge, both major venues. That prepared me for life outside the classroom. At SCAD Radio if you have an idea and can find a way to make it happen, you’re the only person that can stop you.”

Bennett and Adamo both agree that the fact SCAD Radio’s home is on the web has not hampered its ability to compete aesthetically with its more traditional, terrestrial counterparts - most of which, it should be noted, augment their over-the-air signal with simultaneous Internet streams in hopes of better servicing existing listeners and reaching untold numbers of new fans across the globe. (Arbitron ratings currently estimate weekly online listenership at 29 million, but the true figure is believed to be much greater.)

“Our library has grown to the point where we’re having to come up with creative ways just store all the material. I’m extremely pleased with our variety of programming. It’s beyond what you expect from college radio — with shows ranging from bluegrass to disco to movie scores.”

Bennett also points out that in addition to regularly playing local artists’ tracks on WRFS, the station has (albeit haltingly) taken the lead in organizing and presenting several live, all-ages concerts over the past few years, which have featured original acts from the immediate area as well as established touring bands who likely would not have added Savannah to their itineraries were it not for the support and exposure provided by www.scadradio.org.

“I would ask you to name another local radio station that has sponsored a similar number of free concerts featuring local musicians. Or name another local station that plays music by local artists every single day, or which regularly schedules live interviews and performances in their studios. Clearly, SCAD Radio is actually leading those directions in our market.”

Yet sadly, despite the excitement surrounding the relatively new field of Webcasting, Federal legislation regarding copyright royalties and intricate electronic record keeping (currently being appealed by proponents of internet-based radio) may strike a death blow to the smallest —and thus, most unique— stations, both school-affiliated and private.

“The biggest losers,” says Rice University’s Will Robedee (a leading expert on webcasting), “will be the artists and the public, followed by the students who’ll likely lose their ability to learn and to even exist as webcasters. As these stations disappear, the ability of the smaller, independent artists to gain exposure disappears as well.”

To read the full interviews with John Bennett, Stephanie Adamo and Will Robedee, head to www.connectsavannah.com. For more detailed information on pending legislation: www.savenetradio.org. 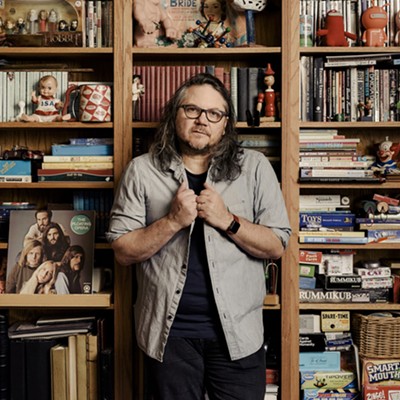