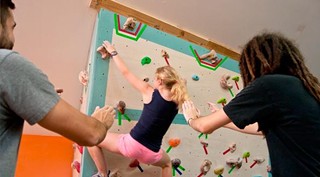 New to the ever–changing West Victory corridor — and just in time for an influx of students from other parts of the country where the sport is more popular — is Savannah’s first climbing gym.

The Savannah Climbing Co–op opened its doors to an enthusiastic audience over Labor Day weekend. It was the penultimate moment in a three–month race to give Savannah’s climbing community a place to do their thing.

The co–op is the brainchild of Douglas Galloway, an avid climber and a traffic manager at SCAD by day. Galloway returned to Savannah after living for several years in Tampa. It was there that he joined a climbing gym and fell in love with the sport.

“When I moved back to town, I knew this was something that I couldn’t let go of,” he says. “So I visited websites to network with other climbers and outdoor enthusiasts. When I saw the demand for a climbing space, I knew I had to do something.”

A few months and a lot of muscle later, Galloway and a small team of founders made good on their mission. In June, they secured the space at 302 W. Victory and, through the donations of time and equipment, have recently completed Phase I of three planned build–outs.

Restricted by ceiling height, the co–op is a bouldering facility, as opposed to a more commonly understood roped climbing gym, but the concept is similar.

“It is both a mental and physical exercise,” says Galloway. “Bouldering is like a puzzle when you’re figuring out the route. No matter the strength or skill level, everyone can get something out of it.”

The space is small yet and but the membership is committed and steadily growing.

“I’d like to share our walls,” says Galloway. “The Co–op is about more than just climbing. I want it to be a meeting place, a space for us to pool our resources and grow our community.”

Future phases include plans to double the space and roofing in the vaulted ceilings for cave–like climbing. Galloway also aims to offer a fully equipped pro shop with discounts for gear given to members.

His hopes are high for a well–organized cooperative where members plan trips to visit real, outdoor climbing spots, as close by as Macon and as far as Red Rocks out west.

Rates begin at $10 per day or $40 per month, with discounts for students and military. To start, the volunteer–operated gym will be open from 6–10pm on Tuesdays–Thursdays, 6pm–12am on Fridays, and 10am–6pm on Saturdays and Sundays.