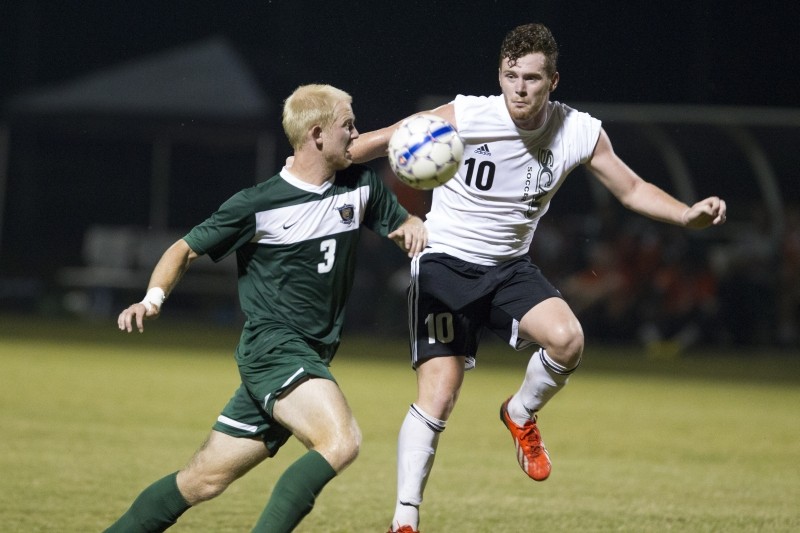 Jordan Trinci-Lyne (no. 10) on the pitch. The forward is a native of Chester, England. Photo courtesy of SCAD

For more info about SCAD soccer go to scadathletics.com

I SAW A MAN at Flip-Flop Tiki Bar this summer with red, white and blue face paint. It was a USA match in that quadrennial exercise of American soccer fandom called World Cup.

Once every four years, for about a month, our country loves this global sport. But for a few of us in Savannah, soccer is a constant mania.

For us, I think some of the area’s best soccer is played now, during a few short weeks in the fall. That’s when the Savannah College of Art and Design men’s and women’s soccer teams take their serious and fast-paced games to small but appreciative crowds.

I spoke with the college’s two soccer coaches, the men’s Tom Melville and the women’s Rebecca Gunn.

“It is entertaining,” says Melville. “I always use that as my thumbnail gauge to the players.  Have you entertained me tonight?”

Their headers, tackles, shots and goals have delighted me for years. They’re good.

The men have made it to their conference final in four of the last five seasons. They claimed the championship in 2010.

“We’ve got a very good squad this year,” Melville says. “But you do need a little bit of luck in that final moment.”

Like any good coach, Melville doesn’t settle for second-best. The women also have that drive. After a subpar season, they’re regrouping under a new coach, Rebecca Gunn, a former assistant coach.

“I’ve been amazed at the pressure,” Gunn says. “As an assistant, you feel it. But it doesn’t keep you up at night.”

Both teams play at SCAD’s soccer complex, one of the area’s best pitches. Fans drive six miles over the Talmadge Bridge and sit close enough to hear the players call to each other, protest to the referees and slide across the grass. It’s intense.

“The fact that you’re that close, in person, right there on the sideline,” Gunn says. “You’re right on the pitch and so it’s exciting.”

You hear a lot of foreign accents. You would expect that with soccer and SCAD.

But the men have more internationals than the women because of the difference between men’s and women’s soccer in the United States.

“This is the capital for women’s soccer in the world,” Melville says. “That’s not the case for the men.”

Gunn can snag great players from the land of Hope Solo. But Melville has to recruit more widely.

That means that South American flair, English directness, American hard work and European technicality all have to blend into a team every year as students come and go.

“The challenge for me is trying to put all that together,” Melville says.

And the coaches end up learning to bend.

“There have been times, especially during mid-terms week, when, we as coaches, we learn, we need to be extra flexible that week and understand why the students are coming here,” Gunn says. “These are student-artist-athletes.”

In that order. Only a few players go pro. But all of them are looking for creative careers.

“If someone’s passionate about something and if they persist and continue to follow their dream, more often then not, they reach that goal,” Melville says.

I just wish they could change two things.

First, the season is too short! Each team only plays about a dozen home games and already about half of them are over. But the entire American college soccer universe apparently operates on this schedule.

And two, the hellish bugs! The pitch is surrounded by a marsh!

Melville says the college is building a viewing platform that will have fans to shoo away the flesh-biting critters...