Come on feel the GAM

One of Savannah's most legendary bands wants to rock your world. 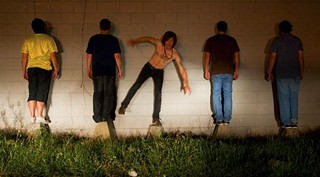 Not many people think of setting themselves on fire, jumping into garbage cans and sleeping in a van as “the good old days,” but the members of GAM are different.

“We’ve been lucky that we’ve been able to live out a lot of the positive, fun, awesome things about being rockstars for this long without having to deal with any of the negative shit,” says lead singer Keith Kozel. “We got to do a lot of the cool stuff. We got to meet cool people. We had a lot of fun.”

After 19 years of ups and downs, including years of rigorous touring around the country, going through drummers “like Spinal Tap,” and most recently, re–establishing a tradition of playing an over–the–top, mind–blowing show every Halloween, GAM is either the most–least–known, or the least–most–known band in Savannah.

But a vague, seemingly counter–intuitive description is probably the only way to sum up a group that has always defied easy categorization.

It started with a rock opera

GAM was founded in Savannah on Easter 1991 with the original members, Kozel, guitarist Kevin Rose and bass player Ronny Kersey planning a rock opera about an alternate universe where a hero raised by insectoid priests goes on a journey of self–discovery to find he has been exploited by the society that raised him.

“Everybody does it now,” Kozel interjects.

As strange a beginning as it was, originating from a sci–fi rock opera influenced two of the most key elements of the group: 1) Put on an intense, theatrical live show with no pauses between songs, and 2) have fun.

“It’s meant to be fun,” Rose says. “When we wrote the rock opera, we would record it on cassette and listen back at the end of the night, and if we laughed at the new section, we knew we triggered something.”

Having mastered the original piece of music, the band began adding more songs, further dissecting their live sets, and searching for a drummer who could survive more than a few days.

“We even got to the point where we tried it with two bass players and a drum machine one time,” says Kozel.

A Maytag repair man, a hippie with a stalker, a machine — none could handle the job. But once they found someone who could, the band took off, and through the latter half of the ’90s, GAM was touring heavily across the country and building a devoted fanbase.

“We were at a point in our career where we were actually starting to fill up clubs in New York, getting noticed in Chicago and big cities,” Kozel says.

The live show grew ever crazier, which lead to more pyrotechnics, elaborate costume changes and odd props — illustrated by members’ anecdotes about setting fires on sidewalks in Syracuse, Kozel setting his chest on fire in Detroit, and being banned from a club in Athens after accidentally smacking the owner in the head with a flaming skull.

It also got them attention from labels, but nothing ever quite seemed to work out.

“We weren’t easily packaged,” Rose says. “There were a lot of bands that existed on the road to this day that do great on the road, but they don’t have record sales and labels that understand how to package them.”

“Label guys would come to our show and be like ‘we can’t get you a deal, we just like you,’” says Kozel.

The momentum that had been building for years finally came to a screeching halt around the turn of the millennium when GAM’s drummer had to leave the band after he and his wife moved back to their hometown.

“It was just the straw that broke the camel’s back,” says Kozel. “Suddenly it was like, really, we have to start again?”

The group decided it was time to take a break.

“I guess we’re not doing that song in 19/8,” says Rose, as the band sits around after a rehearsal for their upcoming show, referring to a preposterously complex time signature for a song.

“We always had to have a drummer because a drum machine would never suffice,” Kersey says.

After taking several years off from GAM and playing in other bands, it was GAM’s second bass player, local music scene staple Mike Walker — who joined the group after Kersey took a sabbatical and who helped write a sizeable portion of GAM’s newer material — who inspired them to get back on stage for a Halloween show at the Jinx several years ago.

GAM’s new lineup was solidified by the additions of drummer Josh Safer and keyboard player Ricardo Ochoa (often better known locally for his classical violin than his psychedelic roots), both of whom were playing with Walker in a prog–heavy instrumental group called Blackwurm at the time.

With an intermission that included bikini–clad girls wrestling in fake blood, it seemed that GAM had finally found its stride again, and their annual Halloween show became a renewed tradition.

“We used to do two shows a year in Savannah,” says Rose. “We used to do a show in the summer and one on Halloween, and then we toured in between.”

A room full of costumed revelers mesmerized by the intricate, breathless musical performance seems to be much of what the band hoped for from the beginning.

“We’re all in this together and we’re all having a blast,” says Rose. “Let’s all throw down together and be the catalyst for everyone to get crazy and have a good time.”

“It’s an escape, for us and them,” says Kersey.

But while the lights, costumes and allusions to mythological rites are a sight to behold, it is the music — blending prog, punk and glam rock influences – that matters most to the performers.

“If the music wouldn’t stand up on its own without the theatrics, we wouldn’t even be doing this,” adds Kozel.

Origin of the name

In case you’re wondering where the name GAM actually came from, it’s a reference to a Japanese live action, sci-fi television show from the 1970s called The Space Giants, which featured a family of humanoid robots — Goldar, Silvar and their son GAM.

The show was similar to programs like Ultraman: people in rubber monster suits fighting amidst small scale city sets.
There’ve been several newer artists calling themselves GAM recently as well, including a Japanese girl pop duo (who took over the Wikipedia page listing for GAM) and a European DJ.

Next year will mark the band’s 20th anniversary, and although there are rumors each year that the next show might be their last, the rumors have so far all proven false.

“We’re having fun and we’re friends. When it’s not fun then that’s probably the time to stop,” says Rose.

This week will be the first time in over a decade that GAM has played a summer show. The decision was spurred largely by demand from friends and fans who have hung on through the years despite the band’s relatively low profile.

“It’s something special,” says Safer, “being in a packed club and looking out and you see all these people that you know, and thinking, these people have seen this band God knows how many times and they’re singing lyrics. That’s a unique situation... These people remember.”

As Savannah’s music scene continues to gain notoriety on a national stage, following the success of acts like Kylesa and Baroness, among others, GAM is proud to have created a legacy as one of the city’s truly iconic homegrown experiences.

That legacy extends further into the 21st century than many of the band’s members even realize sometimes.

After going to Atlanta a few months ago to see the Butthole Surfers, a band that once opened for GAM in the ’90s, Kozel emailed bass player Jeff Pinkus to say he’d enjoyed the show.

The first line of the reply email was “GAM is on my iPod.”