Come sail away at Ships of the Sea

Where: The Ships of the Sea Maritime Museum – North Garden Assembly Room

It’s not uncommon to meet a musician inspired by John Paul Jones.

A daring, iconic Brit and hero to many, the figure has even inspired a concept album dedicated to his life story.

No, no, no—not the Led Zeppelin bassist, silly! The Scottish-American sailor and Father of the American Navy!

The Ships of the Sea Museum regularly hosts concerts, but this weekend’s fare couldn’t be more appropriate for the venue. Alan Reid, a traditional music icon and founding member of beloved Scottish group Battlefield Band, makes his Savannah debut this weekend with American folk traditionalist Bob Zentz and fresh-and-saltwater-inspired musician Jeanne McDougall. Reid will present his John Paul Jones-inspired work, while Zentz, a Ships of the Sea Museum frequenter, will share his songs on explorer Ernest Shackleton.

During his time in Battlefield Band, Reid revolutionized traditional music through his use of keys. Early on, he introduced the pump organ into the group’s arrangements to mimic the tone of bagpipes. Eventually, the American-made pump organ broke down and a bagpiper joined Battlefield. 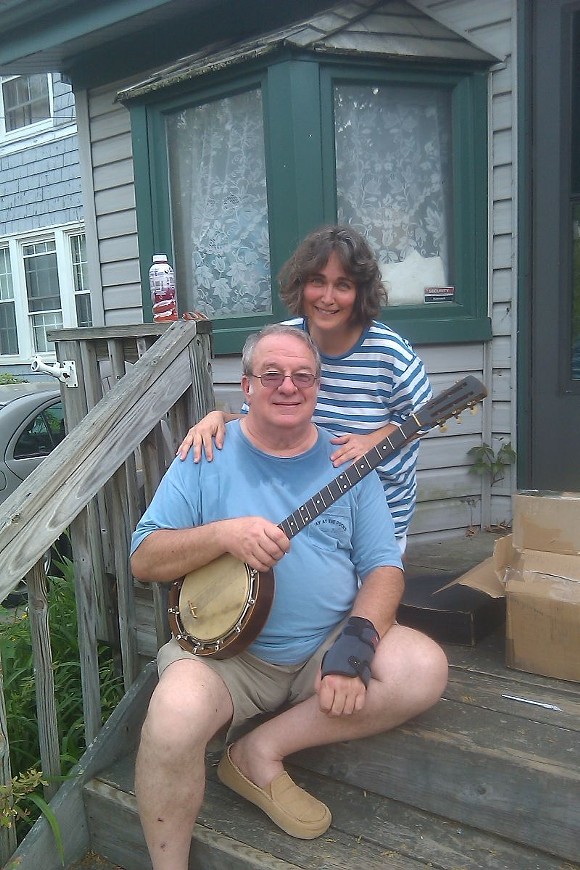 In a polarizing move that horrified some traditional music fans and impressed others, Reid began playing synthesizers.

“When we had synths plus bagpipes, that was much, much too radical for some people,” Reid recalls. “This was kind of groundbreaking. This was something that was really exciting.”

Reid left the influential band in 2010 to pursue his own music. In his time with Battlefield, he’d written many a tune, but only a few made it onto albums. At the Ships of the Sea, Reid will perform work inspired by the life of John Paul Jones.

“John Paul Jones was mentioned as a possible subject for a concept album for Battlefield Band,” Reid says. “I, like most people—if you’ve ever heard of John Paul Jones at all on the other side of the Atlantic, he was some guy, British, but fought in the American Revolution, and eventually won. I read a biography of him and was just absolutely captivated with his story, then read another biography, then another biography, and started writing songs.”

It wasn’t the first time Reid has found inspiration in the lives of noteworthy Brits: prior to the Jones project, he contributed to a series on Scottish poet Robert Burns.

After a few songs filled with adventure, Reid ended up writing a whole album, in collaboration with former Battlefield Band sound engineer Rob van Sante, about Jones’ life in Scotland, America, France, and Russia. With Reid’s natural gift for storytelling, the “Father of the American Navy” comes to life on The Adventures of John Paul Jones.

“The album, in a linear way, follows his life, from track one to the end,” Reid explains.

After the album’s release, Reid was commissioned by the Dumfries and Galloway Arts Festival to compose and script a musical drama based on the hero’s life.

“We don’t get to play this show very often; it’s very specialist,” he explains.

“Most the shows we do are regular folk shows. But especially in the U.S., I get people coming up saying, ‘Wow, I didn’t know all this stuff! I didn’t know [Jones] was an admiral in the Russian Navy, or that his remains are in the Naval Academy in Annapolis.’ That’s part of the minutiae of the story: he was buried in Paris, they exhumed the body 100 years later, absolutely preserved in alcohol, still recognizable, shipped it to Annapolis, and it lies there in a sarcophagus modeled after Napoleon’s tomb.”

Reid and Zentz met decades ago while Zentz was curating folk music concerts in Virginia and operating a music store.

“Our paths have crossed many times,” says Zentz. “We’ve spent time together and thought, wouldn’t it be fun to combine forces? We had these semi-thematic programs, his built on the life and time of John Paul Jones, the great naval commander...and I have been fascinated with the musical aspect of Shackleton’s expedition to the Antarctic.”

Zentz is no stranger to our treasured maritime museum (perhaps you’ve built a strumstick at one of his workshops?) and looks forward to returning and sharing the story of Shackleton, a celebrated hero in the United Kingdom.

“He was knighted for various trips he was on to locate the actual South Pole,” Zentz elaborates. 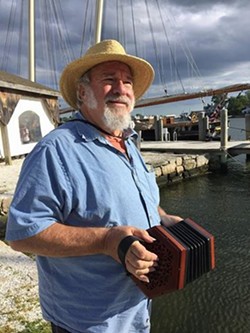 Bob Zentz will sing songs of the sea.

“His most famous expedition turned out to be tragic. The boat [the Endurance] got caught in the ice flow...they couldn’t get out. In extreme north winds, Shackleton’s goal was to take dog sleds and cross the continent going through the South Pole. He had 60 dogs to pull the sledges, but never got to shore. One of these characters he had on board his ship, the meteorologist Leonard Hussey, had a banjo.”

Before the accident, downtime on the Endurance was often consisted of plays and minstrel shows. Hussey’s pickin’ skills were highly entertaining for the crew.

“He always demeaned his own proficiency,” Zentz says. “He would say, ‘I play loud enough to bother the neighbors!’”

When it came time to abandon the Endurance, Shackleton told his crew they could only bring two pounds of their personal gear in the lifeboats. The banjo was much heavier, but, due to its sentimental value, Shackleton couldn’t bear to leave it.

“He said [to Hussey], ‘You must bring this instrument, because it will be vital mental medicine,’” says Zentz.

And it was. As the crew awaited rescue on Elephant Island, Hussey’s playing kept morale high.

With the help of life partner McDougall, Zentz has acquired a banjo modeled after Hussey’s legendary instrument (the original is in the National Maritime Museum in Greenwich).

“It’s called a zither banjo,” he says. “It’s a five-string banjo with a fifth string that runs through a tunnel in the neck.”

Zentz and Reid both have slideshows to accompany their performances and promise a comfortable, friendly listening and learning environment.

After all that exploration, McDougall will drive the watery theme home with a special tune she’s written about our city, taken from The Waters, a collection of songs about her and Zentz’s travels. The collection was a part of her work as a Ph.D. candidate in Historic Song in British Colonial America. McDougall is dedicated to restoring lost musical soundscapes and placing music in a historical context for audiences of all ages.

“Savannah” appropriately sees its premiere in The Hostess City.

“I’m defending my dissertation in L.A. on Tuesday, then returning to the scene of the crime!” McDougall laughs. “I wrote that tune in my dorm room, packing to leave in late June of 2013, and I knew the name was ‘Savannah.’”

For some time, McDougall was unsure if the song was about the Savannah River or the town itself; now, she feels it’s a bit of both.

“The sections of the tune, building in volume and emotion like a river approaching the sea, became instead the tempos of the stages of journeys, the comings and goings of lives that begin with goals, are transformed in passage, and end—when we’re lucky, or listening—with dreams, realized or not,” writes McDougall in the book that accompanies her CD. “The journey’s ending is the beginning of another.”

“I felt that rhythm, being in your beautiful city,” McDougall shares. “I wanted to say how the river moved me.”

“The concert itself is a wonderful wide variety of different music and different folk styles,” says McDougall. “All of it ties back to maritime heritage, which gave birth to Savannah and put Savannah on the map. People will have a chance to travel the broad ocean with John Paul Jones, go with Shackleton to the bottom of the planet in a desperate but ultimately inspiring expedition, and my song, ‘Savannah,’ is part of a collection of songs in search of home and watery places. You’ll go to a lot of places you wouldn’t ordinarily get to visit on a Saturday night!”

“It won’t be a stuffy show,” says Reid. “I like to entertain people. Expect entertainment and education!”