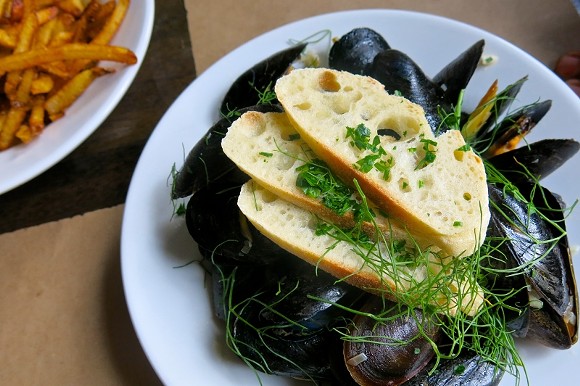 Photo by Melissa DeLynn
“We wanted to create a space that would engage our customers on nearly all of their senses,” says co-owner Donald Ludwicki.

THERE is good food, and then there is great food. At 48 Whitaker Street lives a restaurant, Circa 1875, that has been a cornerstone of the Savannah historic district’s food scene for the past five plus years.

If you are walking on Broughton street in the afternoon, you can probably catch a glimpse of the owners watering the fresh herbs, curating in wine orders, and meticulously maintaining their building. This restaurant continuously raises the bar for what should be considered great food and service in our city.

Circa 1875 is one the most influential places Savannah has to offer, and they remain consistent. In one moment your tastebuds are being stimulated, and the next, your glass is being topped with an artfully suggested wine to pair with your meal. The atmosphere is intimate and welcoming, without being pretentious, and is always embodying the essence of Southern hospitality.

Circa’s concept comes from the vision of two Michigan natives who’ve seen nearly every position the food industry offers. Circa 1875 was their chance to do things the right way.

While carrying a wealth of experience, Donald Ludwicki and Jeffrey Downey stumbled upon Savannah in the process of moving from their hometown in search of something better. They tried on Florida for size, directly after leaving Michigan rea, but eventually fell in love with Savannah.

After working for a handful of restaurants in town and gaining perspective, they saw a lot of opportunity in doing things a little different. Deciding to take a leap of faith and placing their fate in their own hands, in 2007 they finally reached a deal with the building they are in today.

Donald and Jeff had a clear vision. A vision to create an authentic French bistro, with an authentic Irish-feeling bar. 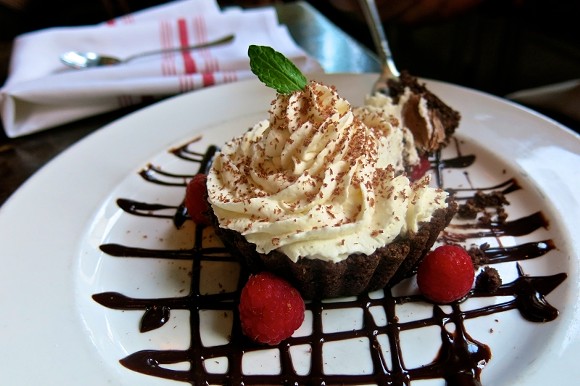 “It’s all in the details,” Donald says. “We wanted to create a space that would engage our customers on nearly all of their senses.”

And as soon as you walk in, it’s apparent that the decor is instrumental in taking customers to France for the evening. From the artwork, to the music and the furniture, when you walk into Circa 1875, the feeling is not something you can get anywhere else in Savannah.

The way in which both sides of the house interact is truly something you do not see often. The choreography from the front of the house is magical, and they are legitimately the most well-trained and experienced wait staff I’ve ever had the privilege of engaging with. Not just remembering the essence of each special, but explaining the food in a way that leaves an impression on all of their patrons.

Creating this atmosphere is exactly how Chef David Landrigan separates Circa 1875’s kitchen from every other in the city. Born in Saratoga, David knew what he wanted to be from the jump.

“I’ve always wanted to be a chef, and at a young age I responded well to the camaraderie of being part of a team,” he says. “The kitchen was also a place for me to gain a lot of confidence in my youth.” 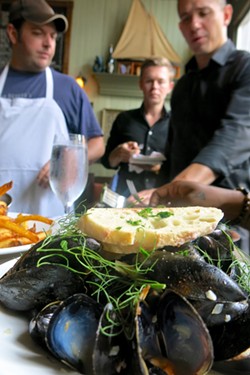 Photo by Melissa DeLynn
Chef David Landrigan, left, and company enjoy some of their kitchen’s handiwork, in this case the amazing mussels.

After studying at both Johnson and Wales and the CIA of New York, Chef David settled into the scene in Savannah, and worked at both the Pink House, and The Mansion at Forsyth.

While climbing the ranks, chef made important connections in the city, none more important than with Donald and Jeff, who were in the process of setting up their restaurant, and were in need a chef.

It’s these moments in which the stars align for something beautiful to take place, and what ensued was the development of one of the best restaurants in Savannah’s Historic District.

In chef’s words, “I was fortunate enough to have a starting point, which was 1875; and that inspired me to create a vintage classic menu that had a modern edge.”

That consistent feeling translates every time I eat at this restaurant; from the warm broth that bathes the mussels and soaks up the fresh bread, to the frisee salad tossed in a cider vinaigrette, adorned with lardons, and topped with a perfectly poached egg.

A few courses in and I’m generally starting to get full, but I mustered enough energy to taste their beautiful rendition of the seafood crepe, and finished things with their dessert special which was chocolate mousse inside a chocolate graham cracker shell. I didn’t eat again for a few days.

It all stems from accountability across the board. Training the staff in caring for their family of patrons’ experiences first, in order to understand the importance of asking the right questions, seeing every task all the way through, and paying attention to the details.

It is a family atmosphere, and I know that personally from working there for about five years. “It’s one thing to say it, and it’s another to actually do it,” chef says. “It’s my job to source local ingredients, and make an impact on where I am.”

It is truly all in the details, and it is this dedication towards customer satisfaction that has given Circa 1875 the respect of patrons and competitors.

Chef David says, “You the customer work hard for your money, so if you spend it with us, we owe it to you to consistently bring the best.”

If you haven’t heard about their newest venture, Donald and Jeff have just closed on a new space which could be the face of Italian food in Savannah for years to come. LaScala will be open in early 2017, so prepare your tastebuds.

Speaking of Circa 1875 Gastro Pub

Art in the Alley helps families in need 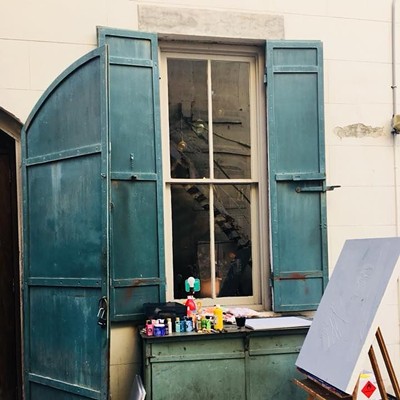