Coming together for the Earth

LIKE many around the world, Kathy Varadi is inspired by Greta Thunberg.

The sixteen year-old student from Sweden has been a passionate advocate for taking immediate action against climate change.

Her plea for urgent action touched Varadi, halfway across the world.

That’s how “Anthropocene” was created. 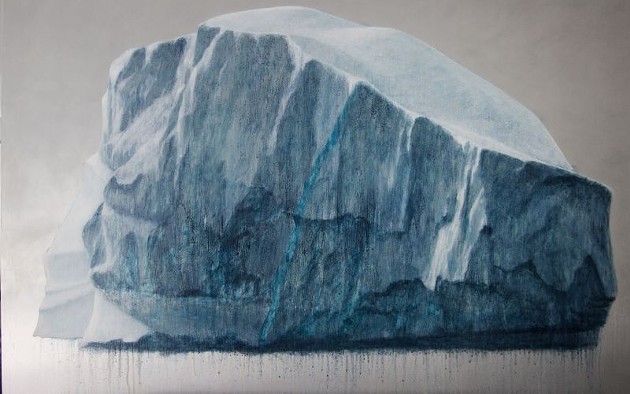 The result of the SCAD Curatorial Incubator Project, “Anthropocene” is a juried show of over 170 pieces that asked artists to reflect on climate change.

The name “Anthropocene” refers to the geological epoch we’ve been in since the Industrial Revolution, which obviously shows the major changes our planet has undergone in the time since.

When Varadi learned of the opportunity, she initially wasn’t interested in curation.

“The email came across, and I didn’t even answer it, I just jumped away from my desk,” laughs Varadi.

But she decided to apply to help round out the submissions, and when she was creating her proposal, she chose climate change as a topic.

“I thought, ‘What topic would be good for my fellow classmates who are in the 20 year-old age group?’” remembers Varadi. “I’ve had an interest in climate change my whole life because I was a biology major and [worked] in medicine. I have a very strong background in science and art, so I started researching and saw there was some interest in science and art. Then I talked to some of my fellow students and they were all over it.”

As evidenced by the number of submissions—over 200—the call for entries for “Anthropocene” really resonated with Varadi’s SCAD classmates. 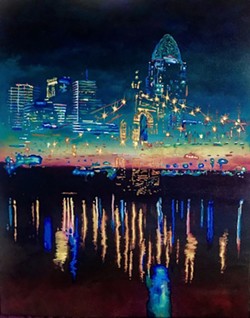 "The City Replaces the Stars" by Lillian Kroencke.

“It’s just taken on a life of its own,” says Varadi. “We have [students from] painting, printing, photo, architecture, fibers, animation, illustration, furniture, and there’s more. The diversity is there. We have undergrad, grad, faculty, and staff who submitted too.”

Varadi herself has a unique background: she worked as a physician in Texas for 25 years before retiring to Savannah.

“Dad always said to do something, so I was sketching and my girlfriend Kim said, ‘I didn’t know you could sketch. You should go to SCAD,’” remembers Varadi. “So I said, why not?”

Varadi received her BFA in painting last June and loved attending SCAD so much she couldn’t leave. The community she found here is important in so many ways.

“The reason I did this was because, like Greta says, you think of climate change and think, ‘Oh, this problem is big,’” explains Varadi. “But you have to approach it bit by bit. When you talk to people, everybody’s got an idea. You can’t just have one answer—there are a whole bunch. It’s a collaborative. And all those people making money off fossil fuels—how do we go up against that big business? If the whole tide turns, if gazillions of people say no... If everybody says no to straws, why would you make them?” 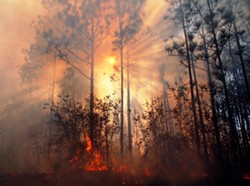 "Sun Through Smoke and Fire in Longleaf" by Randy Tate.

Varadi designed the exhibition to reflect the way we can approach the problem of climate change.

“It’s a collaborative exhibit that mirrors how the solution has to be done: bit by bit, all buddies,” says Varadi.

One unique feature of “Anthropocene” is the community element.

One of the artists participating in the exhibition is Lisa Lebofsky, an internationally exhibited artist who draws inspiration from traveling to remote parts of the world. Her piece, “Melting Iceberg,” an oil painting on aluminum, is the poster image for the event.

While there will be some pieces for sale in the show, Varadi assures that the show isn’t about the money.

“Stuff is for sale, but nobody is pushing it,” she says. “If someone wants it, great, but that’s not the point.”