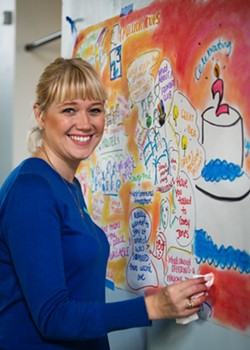 IT USED to be that doodling during a meeting was considered slacker behavior. But what if you could turn those scribbles into a skill?

Armed with a rainbow of markers and rolls of butcher paper, artist Brittany Curry is fomenting such a revolution.

The lively illustrator has been a fixture at some of Savannah’s most prominent gatherings in the last two years, from Emergent Savannah’s Monday Means Community sessions to the Creative Coast’s One Million Cups entrepreneur showcase to Visit Savannah’s staff retreat.

Using a technique known as graphic facilitation, Curry turns the documentation of the discussions and brainstorms into an active flurry of color and style. The resulting full-color murals help organizations streamline ideas and create a visual map that everyone involved can follow.

“It looks like art, people call it art, but it’s more about communication,” explains Curry, who offers her services under the name InkyBrittany and recently helped Healthy Savannah secure a $60,000 grant with one of her graphics.

“It reduces the clutter of the content and boils it down to the main takeaways that can be referred to later.”

She will be co-hosting an introduction to the method on at Non Fiction Gallery on Tuesday, January 17, immediately followed by a three-day “deep dive” with international graphic facilitation gurus Jack Pearpoint and Lynda Kahn on Jan. 18-20.

Though Curry was always the one who drew funny caricatures of her high school chums, she leaned more to the literary for her degree in Liberal Arts from Georgia College. The 29 year-old Savannah native first learned the skill of graphic facilitation in her role as the director of the Milledgeville chapter of Citizens Advocacy, the organization that creates support systems for disabled folks.

Part of her training involved sessions with Canadian social service pioneers Pearpoint and Kahn, who developed graphic facilitation as a tool to help those challenged by other forms of communication voice their wants and needs. 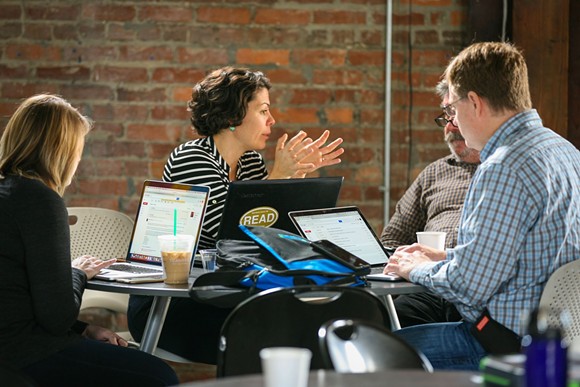 “I saw how using symbols and imagery could include people in the conversation who didn’t necessarily have the words,” says Curry of Pearpoint and Kahn’s take on the concept of “person-centered planning.”

“I also saw that in the corporate world, people were taking notes in meetings on chart paper. So I threw it all together and turned it up.”

“Graphic facilitation creates a living memory of the event and a connecting point for the people who attend and participate,” says Kohler.

Emergent Savannah and Citizens Advocacy have teamed up with Curry to bring in Pearpoint and Kahn for the one-day and three-day workshops. While the team comes from an inclusion perspective, the applications and benefits extend towards all organizations and businesses. 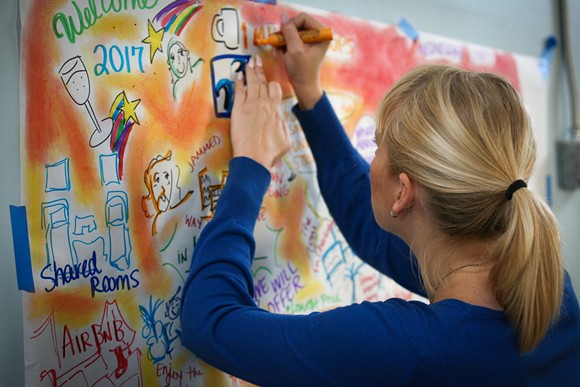 Considering that current culture has moved towards the language of emojis and live tweets, it makes sense for businesses to embrace dynamic imagery that responds to what’s happening in the room.

Google uses visual note-taking in its executive summits, and San Francisco-based graphic facilitator David Sibbet has grown his firm The Grove from a one-man hippie outfit into a worldwide agency.

Plus, doing meetings the old way can be downright uninspiring.

“After 30 years as a consultant, I’m quite cynical about meetings,” says international business tech advisor Murray Wilson, who hired Curry last year to document a presentation at Gulfstream.

“It’s always been this model of ‘sit down, shut up and look at my horrible PowerPoint.’ Instead, this encourages people to think and engage. They’re captivated.”

“Two bad meetings can kill any good idea,” agrees Kohler, adding that because the drawings reach different kinds of learning styles and spark participation from those who might not speak up otherwise, there are political and social benefits as well. “It can help create a more inclusive democracy because it allows more voices to be heard and seen.”

The best part about graphic facilitation is that you don’t need a degree in fine arts to learn it, but a commitment to objective observation is imperative.

Curry cuts a distinctive profile with her blond pageboy, long almond-shaped nails and collection of vintage dresses, but she is keenly aware that her role is more wallflower than star attraction. Standing off to the side of the action with her supplies, she listens deeply to what leaders and participants say, translating the golden nuggets into charming cartoons and visual quotes.

She spends time in corporate boardrooms and disabled clients’ living rooms, distilling ideas, concerns, dreams, wishes and plans with a few strokes of a pen and bit of chalk for shading.

She also documents weddings and other special events and hopes to broaden her work to schools and other places where her colorful maps can help put individuals on the same page.

“Every event or meeting has a timeline that can be turned into a picture,” she says, doodling in her sketch pad as she describes her work.

“An illustration makes it so much more memorable.”

Trending in Quarantine: a Graphic Recording 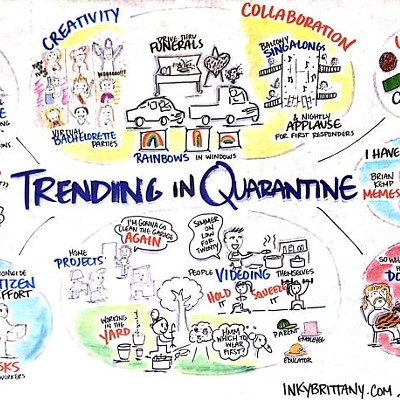