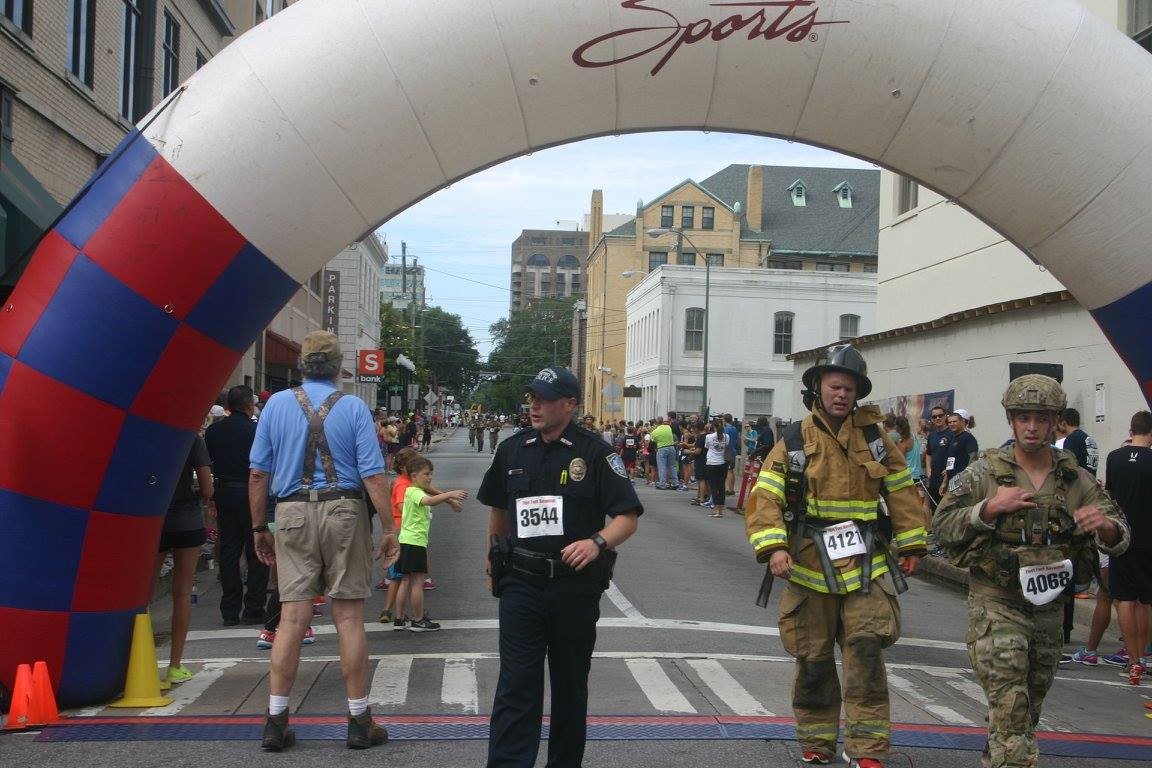 Photos courtesy of the 200 Club
Race participants cross the finish line at a previous year’s Run for Heroes.
Most events were shut down last year, and despite the apparent need for the support it gives to families who need it, the Run for Heroes was no exception. The run, which funds’ go toward supporting families of fallen first responders, returns this year, for the first time ever to be held in Pooler, said Mark Dana, 200 Club of the Coastal Empire president. “This is the largest effort for fundraising and awareness and we didn’t want another year to go by and not have it,” Dana said. The Pooler Run for Heroes 2021 will take place starting at 8 a.m. May 29 at the Pooler Parks and Recreation Department, 900 S. Rogers St., with the finish line being W. Chatham Middle School’s Walking Track. Military, first responder and law enforcement participants are encouraged to join their heat in full duty gear – 30-lb. minimum – to compete for the Full Gear*All Out Flag. This flag has been held by the 1st Ranger Battalion for the last six years.
click to enlarge 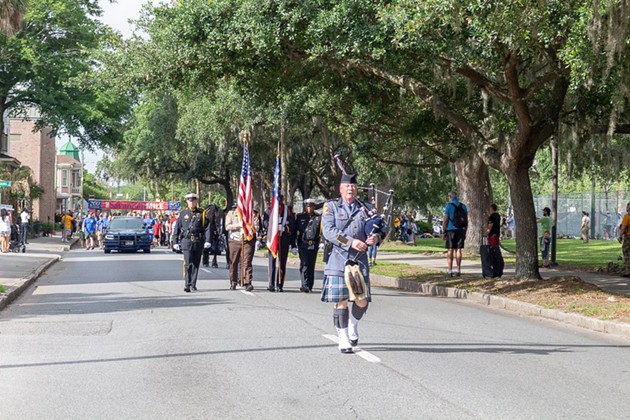 Photos courtesy of the 200 Club
Race participants lead the Memory Walk at a previous year’s Run for Heroes.
“Someone has got to come here and defend [their title],” Dana said. The run is limited to 800 participants, and the cost to join is $25, but participants of the Heroes Heat can take one of the sponsored spots, Dana said. The Memory Walk for families of fallen first responders usually sees around 50 participants. “It’s a good community event between the first responders and the area neighbors or whoever wants to be there,” Dana said. The route is one-mile long and following the final heat, the club will continue the celebration in the track area where there will be static displays, food, Leopold’s Ice Cream and a DJ. “It’ll be a nice wholesome family experience,” Dana said. “You know, we need community relationship building, and particularly in the law enforcement side. This will give folks an opportunity to have good interactions with law enforcement.” The concept of the “Hundred Clubs” was born in Detroit in 1952. Following the fatal shooting of a young Detroit officer, a man named William Packer, the largest Pontiac Dealer in the nation, who was a friend of the Police Commissioner, invited 100 of his business associates to dinner at the Ritz Carlton encouraging them to donate to a fund for the fallen officer; they also agreed to form the One Hundred Club of Detroit. The 200 Club of the Coastal Empire on October 16, 2000, as a Georgia nonprofit charitable organization 501(c)(3). The founder, Tak Argentinis lost his son, Christopher in the line of duty in 1999. The 100 Club of Massachusetts approached him and his family, and that is how he became aware of these organizations.

The 200 Club of the Coastal Empire covers 20 counties from the Florida/Georgia border up into Beaufort and Jasper counties in South Carolina. “It’s about 9,500 men and women in uniform in those counties,” Dana said. “When we have loss of life, a line-of-duty death, our main mission since we began was to respond immediately to the family with significant financial assistance and then maintain the relationship pretty much forever with the family.”
click to enlarge 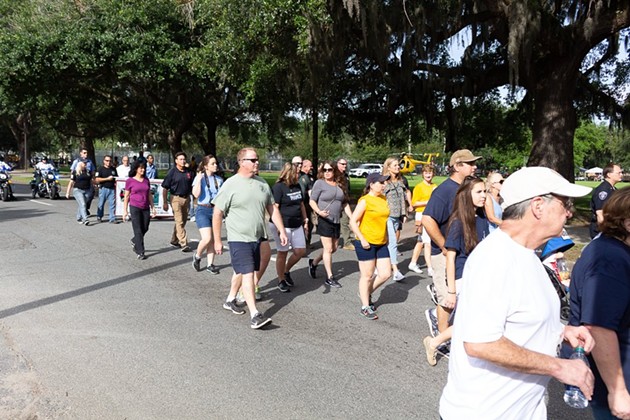 Photos courtesy of the 200 Club
Participants walk the route at a previous year’s Run for Heroes.
Since its inception, the organization has granted over $3.5 million to families of fallen first responders. The funds granted cover living expenses, education costs and much more. Dana said every time the organization responds to an affected family, it is about a $250K commitment. Dana served in law enforcement for nine years. He then served on the board for the 200 Club of the Coastal Empire before he came on as president in 2004. “I have an intimate understanding and knowledge of what the men and women go through on the streets, and have lost colleagues in the line of duty while I was a police officer,” Dana said. “I’ve seen the different sides of it.” The organization hosts several fundraising events each year, including the Tak Argentinis Valor Awards held in April, this run every year on Memorial Day weekend, a Community Heroes Golf Tournament and the Boston Butt sale in November. Dana said 100% of the funds raised go to the families they serve.
click to enlarge 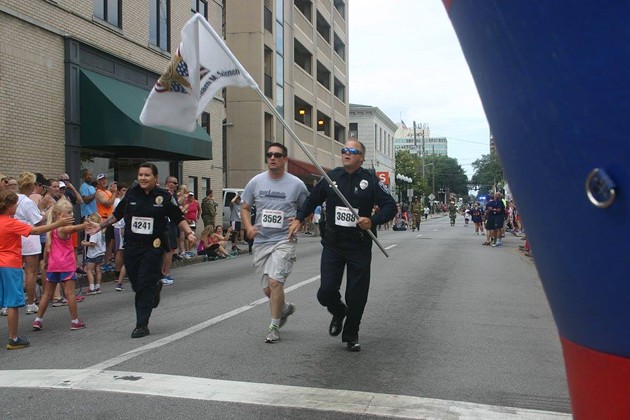 Photos courtesy of the 200 Club
Law enforcement officers participant in full gear at a previous year’s Run for Heroes.
“We need to be standing by, ready for … it’s not a matter of it’s going to happen, it’s when it’s going to happen in the 20 counties,” Dana said. The organization will bring complimentary face coverings for those who wish to wear one and there will be hand sanitizer offered at each static display. There will also be no awards ceremony. Register for the run at twohundredclub.org/run-for-heroes.