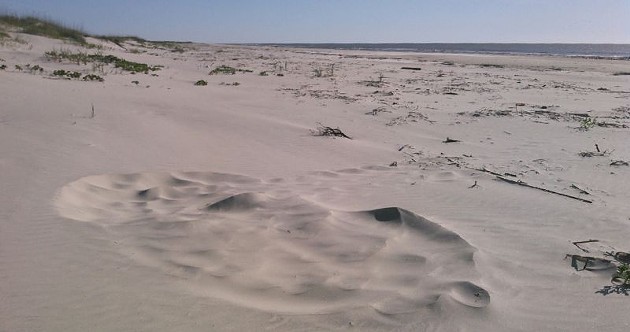 Nesting season for loggerhead sea turtles has begun, with first clutch of loggerhead eggs found the morning of April 27 buried in the sand on a Cumberland Island beach .

Loggerheads, Georgia’s leading marine turtle and a protected species, nest on all barrier islands in the state, including Tybee Island.

The season will hit full stride by June.

Predicting a nest total is anyone’s guess, according to Dodd, a senior wildlife biologist with the Georgia Department of Natural Resources.

The state’s previous record was 3,289 nests in 2016. That count also marked the first time the big, chunky-headed marine turtles had topped a Georgia recovery benchmark of 2,800 nests.

“The loggerhead population was declining through the early 1990s,” Dodd said. “Since then, it’s been increasing at approximately 4 percent annually.”

While nesting year to year has been highly variable in the state, with the overall gains this species federally listed as threatened is making steady progress toward recovery. Nesting in Florida and the Carolinas is also increasing.

Continuing that rebound is the goal of Georgia’s Sea Turtle Cooperative. The DNR-coordinated network of about 200 volunteers, researchers and agency employees patrols beaches daily during nesting season.

Working under a federal permit, members mark, monitor and protect all loggerhead nests, plus those of other species that seldom nest in Georgia, such as green and Kemp’s ridley.

“The cooperative has done a tremendous amount of work,” and with a measurable impact, Dodd said. “We started out averaging about 800 nests a year and we’re now up to about 3,500.”

To prep for the season, Dodd and staff have been training interns, working with volunteers, partner agencies and organizations, and teaming with DNR’s Law Enforcement Division, all while navigating social distancing and other requirements involving the coronavirus pandemic.

Game wardens enforce regulations including the use of turtle excluder devices, or TEDs, in commercial shrimping.

Chatham Area Transit plans to maintain the existing reduced schedule and safety measures implemented in response to COVID-19 pandemic for the next several weeks, even though Governor Brian Kemp’s executive order has already allowed many businesses to reopen.

“With respect to the governor, we’re going to do what we feel is right for our employees and our passengers,” said interim Executive Director/CEO Michael J. Brown. “We’re going to take a cautious approach as we work on plans for restoring services prior to the outbreak in our community.”

CAT also will continue to waive fares to minimize operator and public contact. Customers should continue getting on and off the bus using the rear entrance unless they have disabilities that require them to use the front door with its kneeling function and wheel chair ramp.

Until normal operating schedules are restored, customers should only use CAT services, including fixed-route buses and CAT Mobility paratransit, for essential trips such as medical appointments, grocery shopping and work.

This is especially important since CAT buses are operating at 50-percent their capacity in order to allow passengers to spread out and meet social distancing requirements, Brown said.

The revised bus operating hours are 5 a.m. to 6 p.m., Monday through Saturday, and 7 a.m. until 4 p.m. on Sundays. The modified schedule for each route is available online at https://www.catchacat.org/modified-bus-schedules/.

The Savannah Community Foundation has donated $250,000 from a donor advised fund to The Salvation Army of Savannah.

This donation from an anonymous donor will help The Salvation Army (TSA) build for the future as it anticipates further increases in a need for its services in the aftermath of the COVID-19 (Coronavirus) pandemic.

$150,000 of this donation will go towards the urgently needed renovation of TSA’s Community Center on Savannah’s Bee Rd.

“The roof of this 27-year-old building is in a serious condition of disrepair and is impacting on its future as a safe gathering place, especially during these times of social distancing. Due to the pandemic, the community center is currently being used as an additional shelter for the rising number of people who are facing homelessness and as an additional feeding center for children,” a spokesperson says.

The Community Center also serves as recreational space for TSA shelter residents and those in The Salvation Army’s free rehabilitation program which helps those facing the challenges of drug and alcohol abuse rise above their circumstances.

“This amazing donation gives us the opportunity to make substantial improvements to the infrastructure of our community center. We will be able to run much more efficiently for months and years to come,” says the Salvation Army of Savannah’s Major Paul Egan.

“This gift is obviously a huge blessing to those we serve but also to all of our donors whose gifts are now able to be used even more effectively. And on behalf of our staff and volunteers that during these difficult days have stepped up in remarkable ways to meet the needs of our neighbors, I just can’t express what an encouragement it is to have someone say to us that they believe this much in what we are doing,” he says. 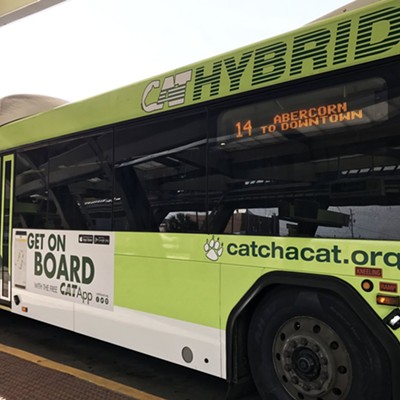