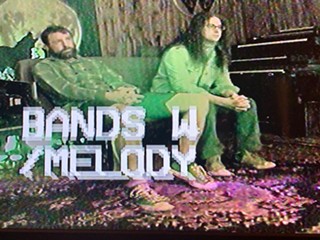 Right now, you can catch a glimpse of the entire album on Youtube at https://youtu.be/U7ouA5rSwFY. There, you will find a recording of Bands w/Melody's live set performed on Oct. 29 at the Graveface Museum. Until then . . .

GROWING UP IN Indianapolis, G. Rettig and Jeremiah Stuard became inadvertent descendants of one of America’s darkest and most curious histories, Jonestown.

While they did not personally know any of the 918 people who died in the mass murder-suicide on the settlement in Guyana on November 18, 1978 (known as the Jonestown Massacre), their sheer proximity to the roots of the Peoples Temple, founded by cult leader Jim Jones in Indianapolis in 1955, was inescapably influential.

On the 42nd anniversary of the tragedy, Rettig and Stuard, as the sole members of Savannah’s Bands w/Melody, prepare to release their new album that has become the vessel that connects Savannah to Jonestown. The album is entitles “Tol.918_11/18/78.Bw/M” – a file extension + the number of Jonestown deaths + the date of the mass murder-suicide + their abbreviated band name.

The album, which started as a single song (“Keeping up with the Joneses”) for the Graveface Museum’s charity album, Beyond Human, has since grown into a five-song, melodic dive into the wretched history of the Peoples Temple. It includes samples from public broadcasting services such as the BBC that intertwines archival recordings of cult members, Rettig’s vocals and canorous chambers of beats, pedals and keys.

“The process was like filling our pallet with audio samples first and then from that, we made our pictures,” Rettig said.

These “pictures” are modern, electric, symphonic rock-esq songs that take the listener on a voyage that is both immersive and disorienting. While the album is being released by the Graveface Museum label in physical form, it is meant to be experienced both aurally and visually.

“The album was meant to be performed live, but since we can’t really do that right now, a physical album is our only way to make a real connection with an audience,” said Stuard. “The album will include a video element that I have put together that we highly encourage people to watch as they listen.”

There’s a narrative that listeners may or may not be in tune to that the visual element works to inform. Rettig likens this marriage of senses to Pink Floyd’s The Wall.

“You can listen to The Wall or you can watch the movie,” Rettig said, with an obvious opinion that any Pink Floyd fan would adamantly agree with. “When you watch it, it just forces you to listen harder and pay more attention.”

One important aspect of the album includes a cover of “Black Baby,” from the album, He’s Able, a 1973 gospel-pop-funk record by the Peoples Temple Choir. Rettig singing lyrics such as “as you grow up; I want you to drink from the plenty cup,” is as eerily beautiful as it is disturbing.

It’s a peaceful melody that contrasts starkly with the horrific realities of the cult’s eventual end that resulted in hundreds of dead bodies covered by white sheets. It’s one of the most curious and haunting pieces on the entire album as it’s a moment where Rettig is singing the actual words of victims who sang for hope and a better world, yet are no longer here.

Like fanatic, occult history in America, Rettig and Stuard have their own personal history that is both long and weird. Once kids who sat at the same lunch table in high school, the two grew up playing in a variety of bands and crossing paths with various musical projects. One of those projects was simply filler noise between sets for one of Stuard’s previous bands that laid the foundation for their work today.

In 2004, the pair graduated high school and moved to Savannah in 2008. They each have helped to weave the city’s live-music scene by playing in popular bands such as the COEDS, Sins of Godless Men, and more.

Tol.918_11/18/78.Bw/M marks the first project they have played together and it was together that they decided to make art from two tragedies, Jonestown and COVID-19. Without being able to play in traditional settings and practice with bandmates who ran in different “bubbles,” they found inspiration in each other as they fell into Jim Jones; as that is the only way anyone really can begin to analyze such a polarizing figure.

As noted by Rettig, through the rhetoric that surrounded the COVID-19 pandemic and other politically fueled current events in America, the mass psychosis induced by the charisma of one of the most notorious cult leaders in history became strikingly relevant.

“The messages of Christian socialism and why they formed their own community is not too far from what we are seeing happen today,” Rettig, said, as he discussed the multi-poignant relevancy of their work.

Like Jim Jones and the Peoples Temple, Tol.918_11/18/78.Bw/M is also shrouded in mystery. The physical release date is close, but currently unknown.